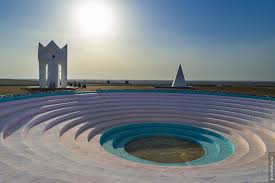 This year, 81 projects were planned under the Tarbie Zhane Bilim (“Upbringing and Knowledge”), Atameken (“Fatherland”), Akparat Tolkyny (“Information Flow”) and Rukhani Zhangyru programmes and around 600 million tenge (US$1.9 million) were earmarked for the projects from the national budget.

Constructions such as the Centre for Spiritual Revival, a museum and youth resource centre, have been erected on the left bank of the Syr Darya River in Kyzylorda. There is also a plan to establish a school with a special emphasis on physics and mathematics.

An academy of traditional arts will be opened to popularise zhyrau (folk singing) and an  international festival of kui (traditional musical composition) and the Korkyt and Music of the Great Steppe folk art festival will also take place.

“Sacred Kazakhstan Geography” includes 12 national objects and 35 historical and cultural monuments of the region. Nine monuments were included in the preliminary UNESCO Heritage List, namely the Korkyt Ata memorial; the medieval towns of Zhent, Syganak, Zhankent and Keskenkuik; the ancient settlements of Chirik-Rabat and Babish Molla; the Zhetiasar cultural monument; and the petroglyphs of Sauskandyk.

A 3D interactive map of 150 monuments of national and local significance is being developed.

The Korkyt Ata memorial complex and ethnic auyl (village) in the Karmakshy district attract tourists to the region.

“The Korkyt Ata complex is located along Western Europe-Western China international highway, which contributes to the increased flow of tourists,” noted Kusherbayev.

A “Sacred Kazakhstan and archaeology” hall was opened in the regional history museum and expositions in 12 museums were completely renewed. For the first time in the region, a forum of local historians was held.

In 2017, within the Tughan Zher (“Small Homeland”) project, memoranda of cooperation between local business entities and akimats (regional administrations) were reached. This helped draw more than 6 billion tenge (US$18.2 million) for the reconstruction of educational and cultural objects and the construction of playgrounds, squares and avenues.