By Aigerim Seisembayeva in International on 4 May 2018

ASTANA – Kazakh and United Kingdom officials recently discussed the possibility of signing a strategic partnership agreement to utilise the British model of developing IT projects in Kazakhstan’s national digitisation programme.

The agreement would be between Kazakhstan’s Ministry of Information and Communications and the UK’s Government Digital Service and would involve governmental and IT business agencies from both countries. The discussions took place during Kazakh Deputy Prime Minister Askar Zhumagaliyev’s April 24-27 visit to Great Britain and Ireland to discuss digital cooperation, cybersecurity and smart cities, the Kazakh Embassy in the UK reports.

Zhumagaliyev met with heads of digitisation of British governmental agencies, including the National Cyber Security Centre and the Government Digital Service. Meetings were also held with the London Mayor’s office, the top management of TechNation, IntelliSence.io and other British and Irish companies. 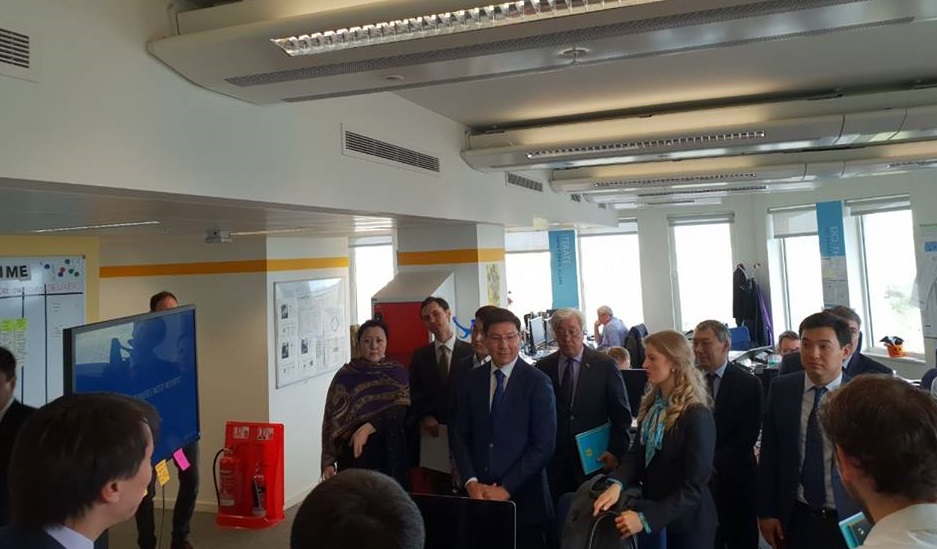 In addition, Zhumagaliyev presented Maxwell with the main priorities and the progress of Kazakhstan’s strategic digitisation programmes and discussed plans to develop the Astana Hub IT Park.

Zhumagaliyev also highlighted Kazakhstan’s interest in the UK’s experience in introducing and using digital technologies in the public services sector. The Digital Service’s conditions it created for British businesses on the principles of open data has made London one of the largest IT hubs in the world, second only to California’s Silicon Valley. Maxwell briefed his counterpart on the key elements of the UK digital transformation strategy and confirmed the readiness of the British side to assist Kazakhstan.

The deputy prime minister’s meeting with London’s first Chief Digital Officer Theo Blackwell focused on digitisation cooperation between the two capitals, creating and developing a smart city system and the use of advanced innovation technologies. Blackwell expressed his willingness to continue cooperation to introduce the smart city system in Astana.

The meeting with the National Cyber Security Centre (NCSC) focused on cooperation in information security, while at the meeting with the Open Data Institute, the sides agreed to cooperate in joint research and development of methods for categorising data.

In global rankings, the UK ranks first in terms of government data openness, providing information support for small and medium-sized businesses, as well as improving the quality of public services for UK citizens. That is why the Kazakh side initiated the signing of a memorandum of understanding between Kazakhstan’s Zerde National Infocommunication Holding and the UK’s Open Data Institute to conduct joint research and seminars to enter the open data space.

Zhumagaliyev also visited the Cambridge Innovation Centre, where he invited Cambridge companies to take part in developing the Astana Hub and discussed opportunities for cooperation in introducing the Industry 4.0 platform in Kazakhstan. The topic was discussed in more detail with the management of TechNation, with which the Astana Hub plans to sign a memorandum of cooperation aimed at supporting start-up projects from preparation to initial public offering (IPO).

Zhumagaliyev also met with the CEO and Founder of IntelliSense.io Sam Bose and agreed to continue cooperation between Intellisence.io and the Almaty Tech Garden technology park, as well as to expand cooperation in mining industry digitisation and the development of the Astana Hub.

The Kazakh delegation also visited Dublin April 27, where it held meetings with Ireland’s tech companies. Irish businesses expressed keen interest in the Astana Hub project. Meetings with Enterprise Ireland and International Development Ireland discussed tools for supporting and developing the digitisation market in Ireland, as well as forming an ecosystem for IT start-ups. The management of the Trinity Irish Innovation Centre has confirmed its readiness to teach technical entrepreneurship to Kazakh students, as well as to take part in the creation of an IT university based around the Astana Hub.