Traditional Kazakh belt wrestling tournament to be held in Almaty

ASTANA – Khalyk Barysy, the first national traditional Kazakh belt wrestling tournament, will be held May 7 as part of the Rukhani Zhangyru programme at the Sunkar International Ski Jumping centre in Almaty. The tournament is an effort to revive beldesu, Kazakh traditional belt wrestling, one of the oldest traditional sports. 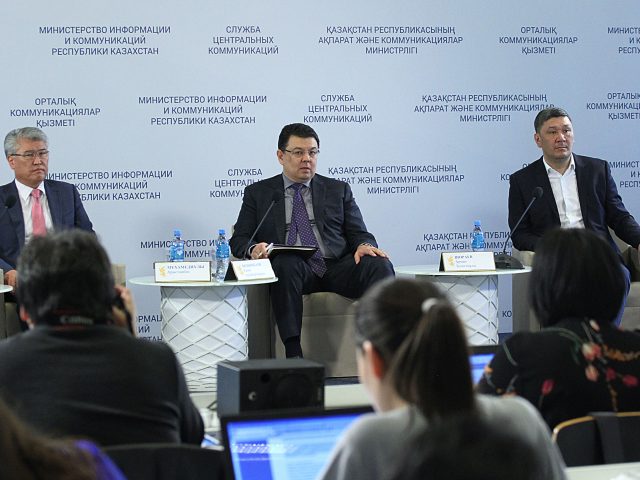 According to the organisers, the cash prize is about 20 million tenge (US$61,000). More than 1,000 wrestlers from across the country will take part in the tournament. The names of four winners will be announced May 8.

“We are reviving our wrestling traditions following the example of Japan, where judo and sumo are widely popular. Kazakhsha kures, traditional wrestling, will remain. Belt wrestling is a more democratic sport. It was widely spread until the 20th century. The rules are simple. Participants do not need expensive clothing. Everyone who is over 18 years old can take part in the competition,” said Kazakh Wrestling Development Fund Chair Arman Shurayev at an April 11 Central Communications Service press conference.

In beldesu, bare-chested wrestlers battle in brown trousers and red or blue belts of a width of 8 centimetres. Victory comes when one combatant forces the other to fall to the ground or touch the ground with a knee, hand or other part of their body.

Fighters may hold and throw their opponents in any way possible, but they may not strangle them or inflict specific physical pain. Wrestlers stand during the bout, and can only grab their opponents above the belt. Gripping below the belt results in disqualification.

Fights last five minutes, with three more minutes added in case of a tie. If the wrestlers are still tied after three minutes, victory goes to the wrestler who weighs less.

“Kazakh President Nursultan Nazarbayev said that modernisation is impossible without national-cultural tradition in the policy article ‘Course towards the future: modernisation of Kazakhstan’s identity.’ History and national traditions must be always taken into account. Thus, we are reviving the martial arts of our ancestors. This will be a grand event celebrating the national spirit,” said Kazakhsha Kures International Federation President Kanat Bozumbayev.