Risks of natural disasters in Central Asia: how to move from response to prevention?

The forthcoming meeting of the Heads of disaster management authorities of the Central Asian states, which will be held on April 27, 2018 in Almaty, Kazakhstan, is a good reason to set sights once again on when disaster risk reduction issue will become one of the national and regional priorities of Central Asia. 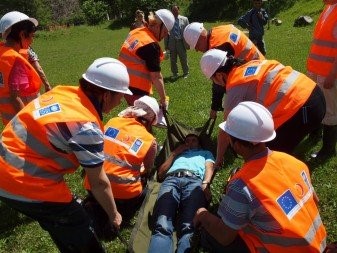 It’s no secret that the region is extremely vulnerable to natural and man-made disasters. The level of threats is growing due to a series of factors, among them are global climate change, growth of population, urbanization, industrial and agricultural development. Almost all countries regularly face seasonal hydrometeorological emergency situations such as floods, mudflows, landslides, avalanches, cold and heat waves. As noted in most of the National Communications to the United Nations Framework Convention on Climate Change, the frequency and impact of these emergencies have recently intensified because of climate change. Besides, the region still remembers the devastating earthquakes that took place at the beginning and in the middle of the last century, as well as various man-made disasters and catastrophes. The situation is aggravated by the fact that even in the absence of large-scale destructive catastrophes in the last decade, several countries suffer from a series of local emergency situations, which in turn divert forces and resources used for unending rescue operations and rehabilitation programmes. It should be also noted that the potential resources for disasters recovery and opportunities to attract foreign investment in most countries of the region are significantly limited.

All this leads to an understanding that there is a need for a radical review of approaches to combat emergency conditions. Of utmost importance appears the transition from a response and recovery actions for prevention and risk reduction, as it is reflected in the Sendai Framework for Disaster Risk Reduction (2015-2030). However, there are historically formed circumstances in Central Asia that limit an ability to change the situation in a quick and fundamental way. These are the general lack of understanding of the problem’s complexity and its scale of impact on the development of the economy and society. The deficiency of risk assessment systems, the underestimation of the cost of damage and losses and the fragmented nature of data collection, coupled with the limited authority of emergency departments, as well as insufficient cross-sectoral coordination form several barriers to disaster risk reduction.

Considering this and based on analysis of the current institutional, legislative and financial situation in Central Asia, we believe that the focus in the short term should be emphasized in the following areas:

Indisputably, this is only one part of necessary measures to be undertaken, and a more detailed range of work is outlined in the Sendai Framework for Disaster Risk Reduction (2015-2030), adopted by all countries of the region.

It is also worth mentioning that it would be incorrect to consider the issue of disaster risk reduction as a stand-alone topic. It is important to consider the close relationship between disaster risk reduction and climate change processes and to carry out the most coordinated work in these two areas. As a result, this will increase both the performance of applied efforts and will positively impact the effectiveness. It is also necessary to consider that both processes belong to the key directions of the intersection of different sectors. Therefore, they directly affect the success and the possibility of achieving the Sustainable Development Goals, the commitment to which has been declared by all countries of Central Asia.

Meanwhile, as a separate issue stands a need for regional cooperation to use the joint capacity of the countries of Central Asia for the successful implementation of disaster risk reduction and emergency response systems. From this perspective, the regional cooperation is primarily dictated because of economic efficiency and expediency considerations.

The establishment of the Centre for Emergency Situations and Disaster Risk Reduction in Almaty, as well as the work of the regular regional platform in the format of annual meetings with participation of Heads of disaster management authorities of the Central Asian countries should be seen as positive steps that demonstrate understanding and desire to work together.

The United Nations Development Programme over a period of two decades, together with other UN agencies, international donors, and partners, has made a significant contribution to the development of the institutional structure, human, technical and financial capacity building in the process of disaster management. UNDP is ready to continue providing support within the whole range of disaster risk reduction issues, given that disaster risks are critical elements impeding development of the Central Asian countries and directly affecting the lives of millions of people in the region.

We are aware that without a common understanding of importance of the issue, without a dialogue and cross-sectoral work, the region will continue to focus its efforts on rescue and recovery activities, which is not fully in line with the provisions of the Sendai Framework for Disaster Risk Reduction (2015-2030) and the principles of the sustainable development. In that context, the planned meeting on April 27 is an important step forward and another opportunity to gain understanding and lay a practical basis for reducing the risks of natural disasters. I am particularly pleased to be a part of this process over the past years and to assist in promoting the risks informed the development of the Central Asian region.