ASTANA – During a two-day official visit to Ankara April 19-20, Kazakh Foreign Minister Kairat Abdrakhmanov met with Turkish President Recep Tayyip Erdoğan and other top officials to discuss preparations for the meeting of the two countries’ leaders in the summer and ways to boost Kazakh-Turkish cooperation.

Abdrakhmanov conveyed greetings on behalf of President Nursultan Nazarbayev and noted how much appreciated Erdoğan’s role in strengthening Kazakh-Turkish strategic cooperation is in Kazakhstan, the Kazakh ministry’s press service reports.

Through joint efforts, the leaders of Kazakhstan and Turkey announced the launch of the so called Islamic rapprochement process in the Islamic world, and while Turkey chaired the Organisation of Islamic Cooperation (OIC) in September 2017, its first Summit on Science and Technology was held in Astana. Erdoğan expressed confidence that the upcoming meeting of the High-Level Strategic Cooperation Council in Ankara chaired by himself and Nazarbayev would boost cooperation between the two countries.

In 2017, trade turnover between Turkey and Kazakhstan, its largest trading partner in Central Asia, grew 28 percent compared to the previous year and amounted to $1.9 billion. Abdrakhmanov spoke about initiatives to modernise the Kazakh economy, as well as the Rukhani Zhangyru (Modernisation of Kazakhstan’s Identity) programme.

Erdoğan proposed a new goal of increasing trade turnover to $10 billion. He was also interested in Kazakhstan’s transition to a Latin alphabet. Erdoğan noted the importance of the Astana process on Syria, supported by Nazarbayev, which, in his opinion, increased the authority of Kazakhstan in the world arena. According to Erdoğan, Astana process guarantor countries Iran, Russia and Turkey will seek to stabilise the situation in Syria, as agreed during the meeting of their presidents in Ankara April 4. The Turkish leader also thanked Nazarbayev for Kazakhstan’s contribution to rendering humanitarian assistance to the Rohingya people.

Before meeting Erdoğan, Abdrakhmanov had bilateral talks with his Turkish colleague, Foreign Minister Mevlüt Çavuşoğlu, where they agreed to finalise the coordination of the agenda and draft documents to be signed during the official visit of Nazarbayev to Ankara in summer. In addition, a number of economic contracts are being finalised. The most promising areas of cooperation are transport, agriculture, small and medium business development and tourism. Kazakhstan is also interested in developing the transport and transit potential of the two countries.

The ministers discussed preparations for the summit of the Cooperation Council of Turkic-Speaking States (Turkic Council), as well as the activities of the Astana-based Turkic Academy.

During the talks, the interlocutors also supported the further continuation of the Astana process on Syria. “In the conditions of the ongoing conflict in Syria, Astana remains the only effective platform for achieving the cessation of bloodshed in Syria. The guarantor states have established a tripartite mechanism to monitor the cessation of hostilities, a working group for the exchange of detainees, the transfer of bodies of the deceased and the search for missing persons, and signed a memorandum on the establishment of de-escalation zones. Today, the Astana process needs not only continuation, but also greater international support in order to improve the situation on the ground. At the same time, we must all fully support the Geneva platform under the auspices of the UN as a platform for a political settlement,” the Kazakh diplomat emphasised.

Abdrakhmanov also met with Turkish Parliament Speaker Ismail Kahraman in Ankara on issues of inter-parliamentary relations and interaction of the two countries in international parliamentary organisations. 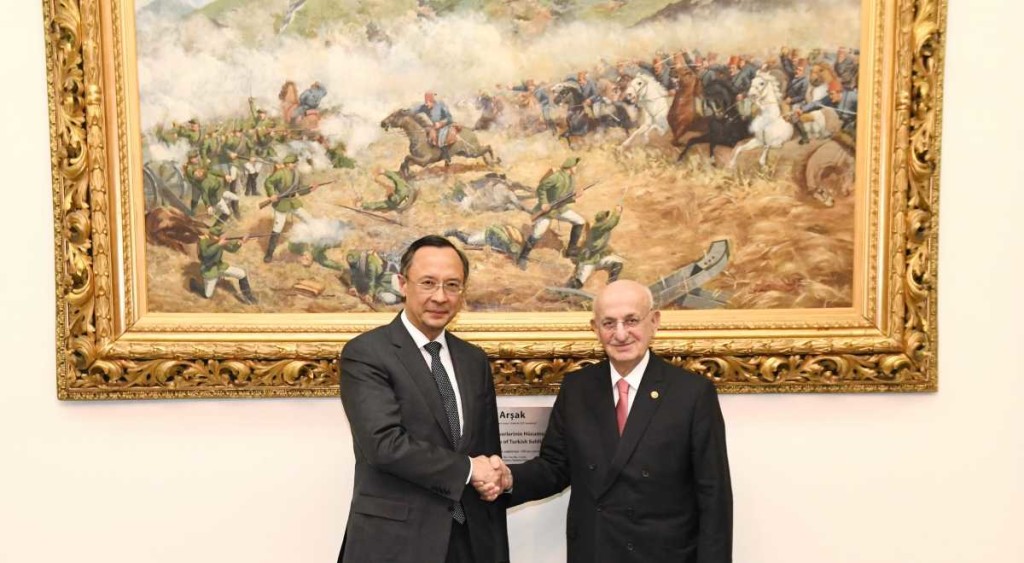 The Kazakh foreign minister also held a roundtable conversation with representatives of major Turkish companies and honorary consuls of Kazakhstan in Turkey where he spoke about Nazarbayev’s economic initiatives as laid out in the state-of-the-nation address “New Opportunities for Development in the Conditions of the Fourth Industrial Revolution” and the recent appeal on “Five Social Initiatives.”

The government of Kazakhstan is working to strengthen the stability of legislation, protect foreign investors and improve the conditions for doing business in the country, he said. Abdrakhmanov called attention to opportunities connected with the Unified Energy System, the implementation of China’s Belt and Road initiative, as well as the launch of the Astana International Financial Centre, the International Centre of Green Technologies and Investment Projects and the International Technology Park of IT Startups.

Within the framework of the visit, Abdrakhmanov also met with the heads of the leading political centres and observers of the Turkish media, where he exchanged views on the geopolitical situation in Central Asia and the Middle East.

To date, the Turkish business community has invested more than $2 billion into the economy of Kazakhstan, and the volume of Kazakhstan investments in Turkey is about $1 billion. Honorary consulates of Kazakhstan are open in the Turkish provinces of Adana, Bursa, Nevşehir, Mersin and the city of Alanya.