By Anuar Abdrakhmanov in Sports on 24 April 2018

ASTANA – The main event of the past football weekend was the match of Kazakhstan’s championship fifth round between the country’s two strongest clubs, FC Astana and FC Kairat of Almaty. The game was anticipated because Kairat lost 0-3 to Astana in the match for the Super Cup of Kazakhstan and was determined to gain revenge for the defeat. 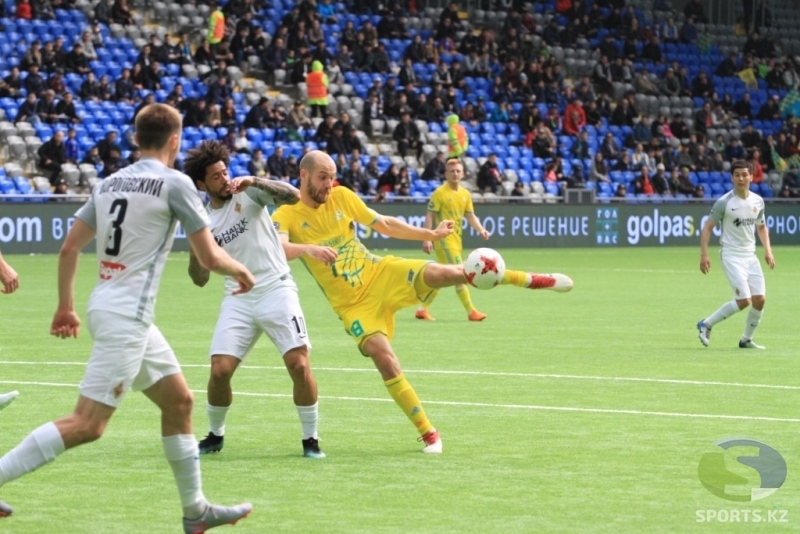 Before the match, Astana had already won all starting rounds of the championship. On the other hand, Kairat lost to team Aktobe. In the first half, the two teams played safe without any serious attacks. The only scoring chance was when Kairat’s midfielder Isael da Silva Barbosa made a long attempt on goal, but the ball hit the post.

The second half was much more interesting. The teams exchanged goal attempts. First, a Kairat defender pulled the ball from the gate line after a shot by Croatian midfielder of Astana Marin Tomasov. Then Kairat striker Hugo Silveira failed in a one-on-one with the goalkeeper.

Just a few minutes later, Astana finally opened the score. Marin Thomasov crossed the penalty area to Bakhtiyor Zainutdinov, and the young halfback, who has become one of the highlights of the new season, scored his fourth goal for Astana, making the score 1-0 in this game.

Kairat midfielder Andrey Arshavin, who came as a substitute in the second half, saved the team. It took the ex-player of London’s Arsenal just a bit more than ten minutes to score a goal. The score never changed until the final whistle.

“The fans witnessed a good match of the European format with a lot of chances for both teams. We controlled the game in the first half, had chances that we failed to realise. In the second half, we scored a goal and then lost the initiative to Kairat. The Almaty team had good players in their lineup and took advantage of this situation. In general, it was a double-edged and even game with a lot of tough and intense moments,” said FC Astana Head Coach Grigory Babayan.

According to FC Kairat Coach Carlos Alos Ferrer, the result of the game was not natural.

“We deserved to win, but earned one point, and the championship goes on. Astana was very powerful the first 20 minutes, and we knew they would put high pressure on us. We also knew we would control the ball more, and the dynamics of the game would depend more on us. I have a feeling that if we had scored first, the victory would have been ours,” he said.

Astana retained the first place in the championship, and Kairat is in the third place.