ASTANA – The Joint Intergovernmental Commission on Bilateral Cooperation between Kazakhstan and Uzbekistan, co-chaired by Kazakh First Deputy Prime Minister Askar Mamin and Uzbek First Deputy Prime Minister Ochilboy Ramatov, met March 14 to discuss relations between the states, including the expected increase in trade turnover, the Year of Uzbekistan in Kazakhstan and vice versa and regional and border cooperation. 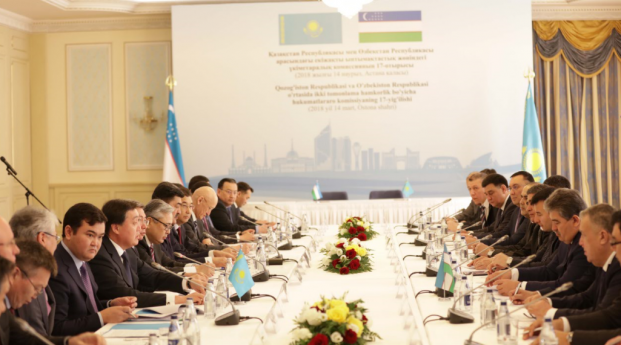 “We welcome the stable, positive dynamics in mutual trade. A further increase in volumes and extension of the list of commodity turnover will contribute to an increase in the volume of mutual trade. In addition, we need to timely implement trade contracts and agreements signed in 2017,” said Ramatov.

The parties agreed on further coordinated measures to ensure the growth of trade turnover to $3 billion in 2018 and $5 billion by 2020, according to the Kazakh prime minister’s press service.

This is the Year of Uzbekistan in Kazakhstan, with plans to hold more than 200 events highlighting the economy, tourism, culture and humanitarianism.

One of the key cooperation factors is the interaction of business circles and investments. Two large business forums were organised last year and commercial agreements worth more than $1 billion were signed. Joint ventures operate in food supplies, petrochemicals and chemistry.

Within the agreement on long-term cooperation between Uzavtosanoat and SaryarkaAvtoProm, a joint project is being executed to export products to foreign markets, including the Eurasian Economic Union.

Regional ties have been developing as well, noted the meeting participants, with Uzbekistan supporting the Kazakh initiative to hold forums on interregional cooperation on a regular basis, read the statement.

The countries also agreed to consider the prospects for building an international cross-border cooperation centre, a transport and logistics centre (dry port) in the border area between the nations.

In 2017, the volume of rail transportation between the states increased 8 percent to 20.5 million tonnes. During the first two months of 2018, traffic volume increased by 44 percent compared to the same period the previous year. The sides noted regular railway passenger trains along the Samarkand-Astana route will start operation in April.

Water cooperation issues were also discussed, as the counties will continue working to implement water relations roadmap activities. In addition, the sides discussed the need to develop a legal mechanism for Central Asian trans-boundary water resources that considers the interests of the entire region.

Kazakhstan and Uzbekistan are also interested in gas industry cooperation. An agreement was reached to continue the joint work to create the technical logistics to transport Kazakh gas supplies through Uzbekistan to the southern portion of Kazakhstan.