The conference was organised by the Uzbek and Afghan governments with a goal to coordinate the basic principles of a peaceful settlement in Afghanistan, the development of a mechanism to launch negotiations between the Afghan Government and the armed opposition and the coordination of international joint actions to support this process.

Minister Abdrakhmanov said Kazakhstan, like all countries in the region, seeks the stable, economically sustainable and safe development of Afghanistan. He said the conference will help that effort and contribute to the peace process.

“Creation of a regional zone of peace, security, cooperation and development in Central Asia, including multilateral assistance to Afghanistan in economic and social development, combating threats to peace and security, as well as strengthening its capacities are among the main priorities of Kazakhstan in the UN Security Council,” said Abdrakhmanov. 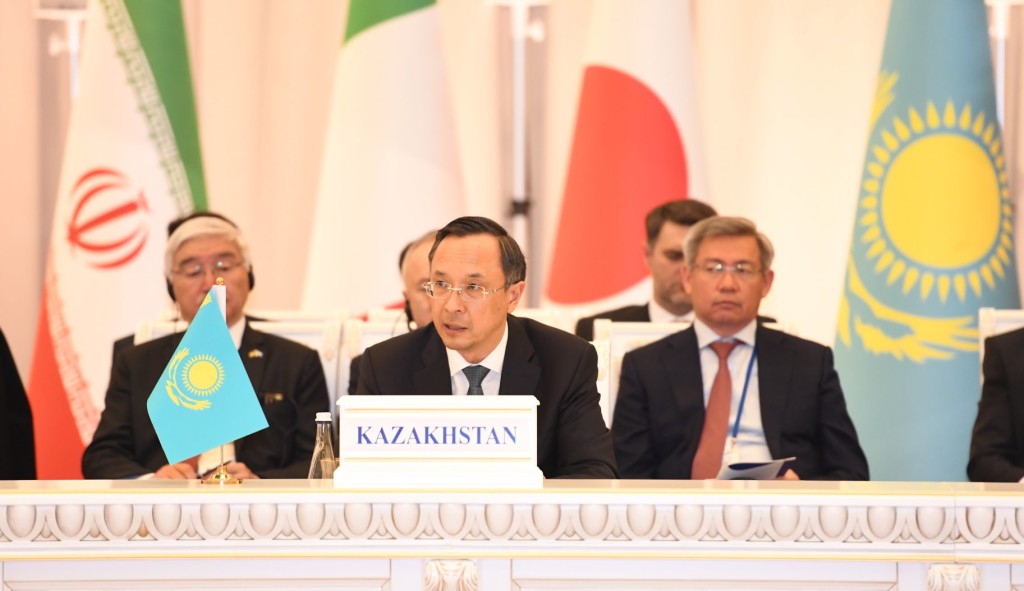 On January 19, the Kazakhstan delegation to the UN Security Council organised a ministerial level debate on “Building a regional partnership in Afghanistan and Central Asia as a model for the interdependence of security and development,” which resulted in the adoption of a consensus statement by the president of the Security Council aimed at improving the efficiency and coordination of foundations, agencies and UN programmes in the region.

In his welcoming speech to the participants of the Tashkent conference Uzbekistan President Shavkat Mirziyoyev expressed his sincere gratitude to President Nursultan Nazarbayev for the initiative shown in convening that meeting in the UN Security Council.

“We believe that the basis for stabilising the situation in Afghanistan should be reforms aimed at improving social and economic indicators in the country, the level of education and other human standards. Afghanistan’s economic recovery through long-term projects and wide participation of the regional countries are the most effective ways of solving complex problems of Afghanistan. We are considering direct participation of Kazakhstan in the development of the rail network of Afghanistan. Our common goal is to link Central and South Asia by stable trade and transport routes”, noted Abdrakhmanov, expressing support for Afghanistan’s integration into the regional network of trade, energy and transport links.

“In autumn 2018 in Astana, Kazakhstan plans to organise the international conference titled Expanding Opportunities for Women in Afghanistan to discuss the role and contribution of women in the peaceful development of Afghanistan, issues of empowering Afghan women in the political, social and economic spheres of the country through increasing their participation in the public and private sectors and developing specific recommendations aimed at enhancing women’s opportunities in that country,” Abdrakhmanov said.

The minister also noted Kazakhstan will continue to provide technical and humanitarian assistance to Afghanistan, both within the framework of bilateral agreements and in a multilateral format, providing thousands of tonnes of humanitarian supplies, including food, essential commodities, fuel and various equipment.

New avenues for the social and economic development of Afghanistan were also discussed at the working (consultative) meeting of the heads of Central Asian states, chaired by the President of Kazakhstan in Astana on March 15.

On the sidelines of the conference, Abdrakhmanov held bilateral meetings with the heads of the delegations of the United States and Iran.

With U.S. Under Secretary of State for Political Affairs Thomas Shannon, the sides discussed expanding the strategic partnership between Kazakhstan and the United States including implementing agreements reached during the official visit of President Nazarbayev to the U.S. in January 2018.

The officials confirmed the sides’ readiness to support international efforts to stabilise and economically restore Afghanistan. The American diplomat praised Kazakhstan’s contribution to Afghanistan’s peaceful development. The sides also discussed strengthening regional cooperation between the countries of Central Asia and the United States.

Abdrakhmanov also discussed trade, transport and logistics cooperation with Iran with Iranian Deputy Foreign Minister Abbas Arakchi. The main theme of the conversation was interaction within international and regional organisations, including CICA, the SCO, and in the context of the Astana Process on the settlement of the conflict in Syria.