By Aigerim Seisembayeva in Business on 16 February 2018

ASTANA – The Ministry of National Economy leadership outlined Kazakhstan’s economic results for 2017 and shared its plans for the current year at a Feb. 12 press conference, reported the ministry press service. 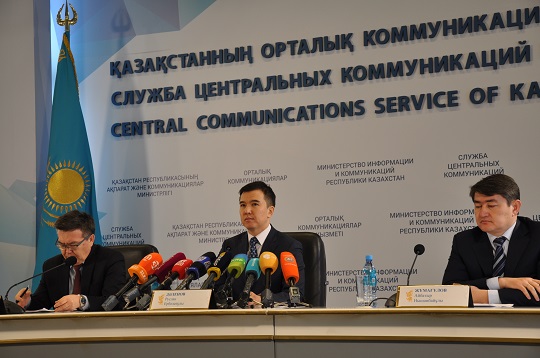 “The contribution to the country’s economic growth in 2017 was also made by the implementation of the Nurly Zher programme, due to which 11.2 million square metres of housing were commissioned, 4,000 kilometres of roads were reconstructed within the Nurly Zhol programme and 120 projects were implemented as part of the Industrialisation Map. The Export Strategy provided support to 400 exporters and 192,000 business entities were supported within the Business Roadmap 2020,” he noted.

The ministry’s tasks for 2018 include ensuring the country’s macroeconomic stability, improving intergovernmental fiscal relations, strengthening the tax policy, expanding the tools and approaches of public-private partnership and effectively managing the country’s debt.

In the past year, the ministry developed systemic measures aimed at deregulating businesses, including reducing the administrative pressure and significantly improving conditions for doing business. A full-scale audit of governmental bodies’ control and supervisory functions was carried out to reduce and optimise them.

A new concept of state control and supervision has also been proposed by introducing preventive control to replace selective inspections. The main tasks of preventive control will be identifying the reasons and conditions for unlawful conduct, explaining the legal consequences of offenses and reinforcing law-abiding behaviour.

In order to ease the burden on businesses of presenting various papers, information requirements are to be reduced 30 percent. Certain new legislative amendments have also been elaborated to improve the business climate.

“Our long-term objective is to let the private sector take the leading role and increase the share of the SMEs in the GDP to 50 percent by 2050,” said the ministry.

He added Kazakhstan’s foreign trade structure changed significantly in 2017, with an increase in non-primary products and some new export items. Export volume increased 31.6 percent to $43.1 billion compared to $32.7 billion in 2016. The share of non-raw materials increased 22.1 percent. Kazakhstan exported more than $14 billion in non-primary products, which represented 32.7 percent of the total export volume. Export growth was seen in timber, paper and paper products, busses and medicine.

Bekeshev also dwelled on the digitisation of the Eurasian Economic Union (EAEU) economies that are Kazakhstan’s main trade partners. The key aspects have been determined to implement the union’s 2025 digital agenda, which primarily affect the speedy launch of initiatives and project approach to executing the EAEU digital agenda.

Using the EAEU platform allows expanding access to the markets of third countries through trade agreements, he said.

“For example, exports to Vietnam, with whom we concluded a free trade agreement in 2015, rose to $274.2 million in 2017, which is 25 times higher than in 2015 (before the conclusion of the free trade agreement). To date, we have also completed negotiations on a free trade agreement with Iran and on trade and economic cooperation with China. This will help increase the volume of trade with these countries in the future,” he said.

In 2018, the ministry plans to enhance the access of Kazakh goods to wider markets.

“We are actively negotiating free trade with Israel, Serbia and India. In addition, this year we will continue working on the implementation of the provisions of the treaty with the EAEU and improving the regulatory framework, as well as removing obstacles in mutual trade in order to create favourable conditions for doing business,” he added.

Vice Minister Aibatyr Zhumagulov spoke about the ministry’s work on developing local self-government (LSG). According to the LSG development law adopted in 2017, LSG budget and municipal property have been introduced since Jan. 1 in rural districts with a population of more than 2,000 people. The rule will be introduced throughout the country starting Jan. 1, 2020. Rural district budgets have already received seven types of tax revenues and five types of non-tax revenues.

“The main peculiarity of LSG budgets is the obligatory participation of citizens in LSG budget and municipal property management,” he said.