By Anuar Abdrakhmanov in Sports on 20 February 2018

ASTANA – FC Astana lost 1-3 to Portugal’s Sporting in the Europa League’s round of 16 competition. 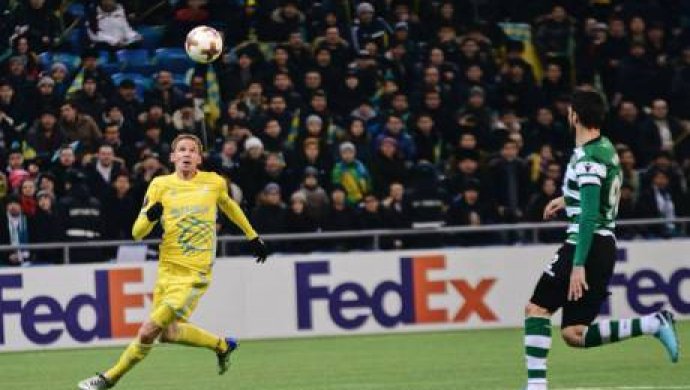 The match was of historical importance for Kazakhstan: no Kazakh football club had ever reached the European Cup playoffs. FC Astana, Kazakhstan’s domestic champion, took second place in Group A, losing only to Villarreal. Sporting went through to the Europa League, taking the third place in Group D of the UEFA Champions League, following Barcelona and Juventus.

No one doubted that the Portuguese had more chances to win this match, as they are one of the favourites of the tournament. Sporting, which lost to CSKA at home in the final match of the UEFA Cup 2004/05, went through to the playoffs of the Europa League for the sixth time. Moreover, Sporting had a much stronger line-up, including goalkeeper Rui Patricio and William Carvalho, who became European champions as part of the Portugal’s national team in 2016, as well as former Real Madrid player Fabio Coentrao.

Despite Sporting’s football pedigree, Astana was quite bold at the beginning of the game, going ahead in the first minutes. Patrick Twumasi passed the ball from the mid-field to Marin Tomasov in the penalty area. The latter forwarded it to the near corner, scoring 1-0. No one expected such a turn of events. A couple of minutes later, Astana’s striker Dorde Despotovic gave the team another chance, but Patricio saved the team.

Sporting, having received a goal at the beginning of the game, quickly got down to business. A couple of minutes later, Sporting forward Seydou Doumbia went to the penalty and shot into the centre, from where Marcus Acuna shot above the bar. Near the end of the first half, Doumbia managed to send the ball into the net of Astana, but his goal was discounted, as the judge decided the Portuguese player was offside.

While in the first half Astana looked confident and well-organised and appeared to be following their game plan, the second half was quite the opposite. At the beginning of the second half, a penalty kick was awarded to the opponent, after Kazakh defender Yuri Logvinenko broke the rules in his own penalty area. Fernandes made an accurate penalty kick, equalising the score.

A bit later, Gelson Martins turned a high cross into a goal with a header. Then, just five minutes later, Doumbia scored his third goal. Things were not going well for Astana, and they got even worse, when defender Yuri Logvinenko was given a red card for another foul, leaving his teammates finish the match one man short. As a result, Astana suffered an unpleasant defeat by one of the best teams of the championship of Portugal, but still has the smallest chance of reaching the next round of the tournament. The return match between the teams will take place on February 22.

“Unfortunately, we lost a game we shouldn’t have lost,” Astana head coach Stanimir Stoilov said after the game. “I can divide the game into two parts. The first half was perfect, we had chances, scored a goal and could score another one, while maintaining good defence. In the second half, we lost concentration and allowed two goals in the first 15 minutes. After Yuri Logvinenko’s sending-off, it was very difficult to do something, but we defended well and did not miss any more goals. If you make such mistakes in the Europa League, you will always be punished,”

“It is very important that we return to Lisbon in a good mood. We know that teams left defeated or with a draw, and we managed to win. In the first half, Astana set a high pace. Our right wing suffered the most. I explained everything at half-time, the players understood everything and followed my instructions. So, the second half ended in our favour,” commented Sporting coach Jorge Jesus.