By Aigerim Seisembayeva in Business on 10 February 2018

ASTANA – Members of the Kazakh government reported to President Nursutlan Nazarbayev during the Feb. 9 extended government meeting, outlining the key outcomes of 2017 and setting goals for the coming years. 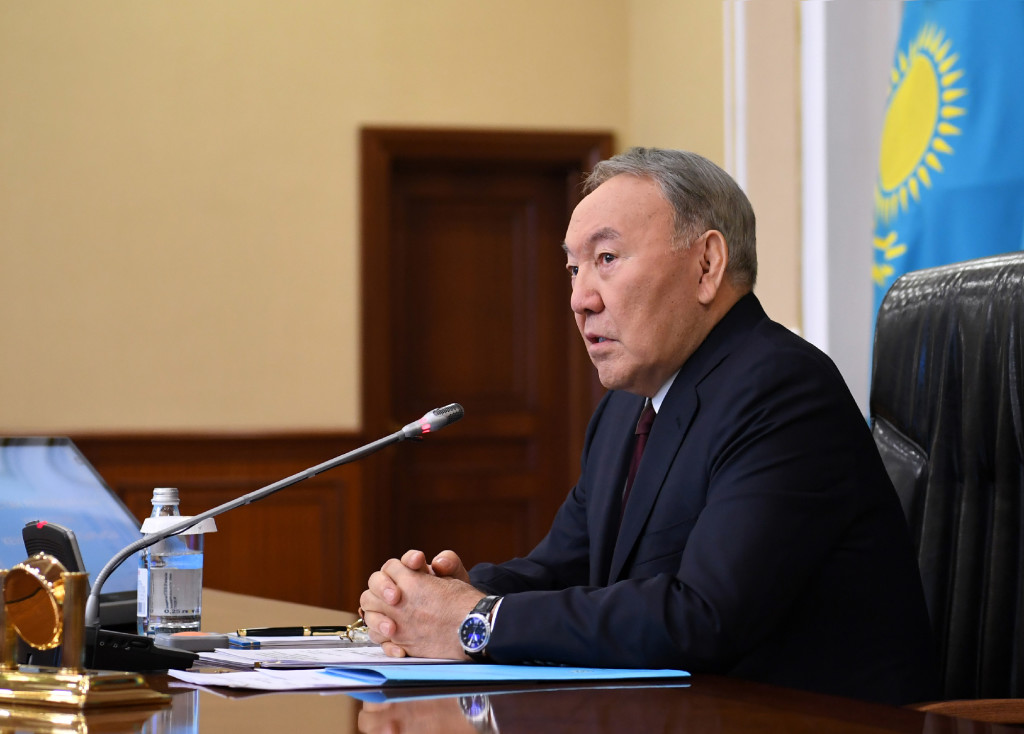 Opening the meeting that lasted for more than three hours, President Nazarbayev said the past year was tough and marked by an unstable global economic situation. His overall assessment of the government’s work in this regard was mostly positive, with targeted criticisms addressed to certain ministers regarding the implementation of major national programmes.

Nazarbayev focused on problems in the banking sector, clarifying the objectives of the digitisation programme, controlling the budget and reducing inspections of small and medium-sized enterprises (SMEs).

Sagintayev presented a 20-minute report on the government’s work carried out in 2017. He noted the national economy has reached the point of stable development, which is confirmed by international rating agencies that are providing stable forecasts to the Kazakh economy.

“GDP [gross domestic product] grew four percent, and 60 percent of growth was provided by non-primary sectors. It is important because it shows the economy’s stability and the change in its structure. Foreign trade turnover grew 25 percent to $69.5 billion. Investment in fixed assets increased 5.5 percent, with private investments growing 6.9 percent,” he said.

Sagintayev also highlighted that inflation dropped to 7.1 percent, the national debt did not exceed 26 percent of GDP and the national budget income grew 26.3 percent.

He then focused on the results of the implementation of national programmes initiated by Nazarbayev in previous years.

Regarding the “100 Concrete Steps” Plan of the Nation, Sagintayev stated 74 laws and more than 500 legal acts were adopted over the three years of its implementation, while 55 steps out of 100 have already been implemented.

The measures undertaken as part of the plan include a complex attestation of civil servants, testing of the new result-based system of their remuneration, transition from a five-tier justice system to a three-tiered one, a new antimonopoly legislation that is in line with the standards of the Organisation for Economic Co-operation and Development (OECD), a shorter procedure for obtaining permits, a tax reform that will increase budget revenue by 90 billion tenge ($276.3 million) in 2018 and the Government for Citizens corporation that provided 64 million services in two years, among other measures.

Nazarbayev, in this regard, instructed the government to take control of the introduction of electronic declaration for imports and the reduction of the number of inspecting and supervisory agencies.

The head of state also instructed the prime minister to take control of the work on attracting transnational companies to the manufacturing sector, noting the important role of the Kazakh Invest and Kazakh Export national companies. Investment into agriculture and the Astana International Financial Centre (AIFC) are among the top priorities.

In addition, he outlined the issue of self-employed citizens and their impact on the mandatory social health insurance programme.

“Another cause of the slowdown in healthcare reform is poor digitisation. We still do not have electronic health passports. Medical institutions on the ground are poorly provided with computers and access to the Internet. This is the area of responsibility of akims,” said Nazarbayev.

He also instructed the governmental bodies to continue reducing the excessive repressiveness of the criminal process and increase its humanisation.

In the anti-corruption dimension, Nazarbayev stated that taking systemic preventive measures is the main task in the fight against corruption.

The State Programme of Accelerated Industrial and Innovative Development (SPAIID), according to Sagintayev, is the main tool for diversifying and improving the industry’s competitiveness.

The contribution of the manufacturing sector to industry increased from 31 percent in 2010 to 40 percent in 2017. Non-primary goods export grew 22 percent, extending to 122 countries.

Nazarbayev, commenting on the results, instructed to take measures to increase the manufacturing sector’s share in the economy.

He also dwelled on the issues of introducing advanced technologies into production and enhancing the export capabilities of businesses.

He also instructed to examine the effectiveness of existing special economic zones and temporarily prohibited the creation of new ones.

The head of state also discussed processing in the oil and gas sector and the transformation of the Samruk Kazyna Sovereign Wealth Fund.

Sagintayev’s report outlined the key goals of the Digital Kazakhstan programme that is now under implementation. Those include providing broadband internet access to all populated areas of Kazakhstan, increasing the population’s digital literacy, creating digital factories and providing a legal framework for e-commerce, venture capital financing and the IT industry. The Smart City concept has been approved and is to be tested in every region by the end of the year.

Over the years of independence, according to the prime minister, around $300 billion in foreign direct investments (FDI) were injected into Kazakh economy. The FDI structure has changed, with 25 percent accounting for manufacturing industry, and 50 percent invested into non-primary sectors.

“The government is ensuring the implementation of your (Nazarbayev’s) agreements with China, Russia, the United States, Japan, South Korea, Iran, Turkey and other countries on developing production capacities worth a total of about $50 billion,” said Sagintayev.

The Nurly Zhol infrastructure development programme creates 100,000 jobs annually and has built 2,000 kilometres of roads in three years. More than 500 kilometres are to be commissioned by the end of 2018.

In this context, the head of state specifically highlighted the need to monitor the efficiency and transparency of the use of funds for highway construction. Nazarbayev also drew attention to the importance of building interregional and inter-district roads by redirecting the expenses for non-priority national roads.

The three years of implementation also resulted in 1,376 kilometres of new railways, a runway reconstruction in most airports of the country, a new railway station and an airport terminal in Astana.

The construction of the 2,857-kilometre Kazakhsection of the Western Europe – Western China international corridor has been completed, covering more than 240 settlements in five regions with a total population of about 5.5 million people.

New logistics hubs were created in Kazakhstan’s eastern and western regions, a new joint Kazakh-Chinese logistics terminal was built in Lianyungang and the Trans-Caspian international transport route has started operating.

“The task is to bring the profit from all types of transit to $5 billion and increase cargo transit from China to Europe to two million containers by 2020,” Sagintayev said.

The Nurly Zher programme ensured the commissioning of 11.2 million square metres of housing and new accommodation for more than 100,000 families in 2017. This resulted in a growth in the construction industry, with the volume of construction material production amounting to more than 440 billion tenge ($1.3 billion).

In this sphere, Nazarbayev instructed the government to revise the mechanisms to further implement  the state programme.

“Over the past two years, the state allocated 550 billion tenge ($1.7 billion) for housing construction. All this was spent on direct construction financing. In the crisis years, it was a justified measure. Now we need to switch to market mechanisms. Banks should finance construction, and the government, the National Bank and akims should create conditions for cutting housing costs,” he said.

Other results outlined by Sagintayev included the growth of the agricultural industry’s exports by 10 percent and gross agricultural production’s growth by 2.9 percent due to measures on increasing the effectiveness of state subsidies.

The programme of productive employment and entrepreneurship development involved more than 570,000 people in the first year; 315,000 of them have already been employed. The business sphere has been deregulated and a new entrepreneurial code has been adopted.

The measures taken allowed increasing SMEs’ output 29 percent and the share of SMEs in the economy by almost 27 percent.

Sagintayev also dwelled upon the Modernisation of Kazakhstan’s Identity programme that, among other things, includes a transition of the Kazakh language to the Latin script. He stated the step-by-step transition plan has already been elaborated.

The New Humanitarian Knowledge project identified 800 humanitarian science textbooks and translated 17 of them into Kazakh. The Tugan Zher (Motherland) project has carried out 700 events and is expecting 300 more. Private donors provided more than 51 billion tenge ($155.6 million) for the project. The Kazakhstan’s Sacred Geography project outlined 183 objects of national importance and 520 objects of local importance. The 100 New Faces project winners were identified and presented to the public.

Nazarbayev noted the formal and non-systemic approach of some heads of regions to the programme’s implementation.

“The modernisation of identity is not limited to one year. It is a long-term work that requires systemic and constant search for new methods,” he said.

At the end of the meeting, Nazarbayev highlighted the importance of implementing all the priorities of his recent state-of-the-nation address.

“In the address, I outlined ten specific tasks in the conditions of the fourth industrial revolution. The Presidential Administration, the government, the Parliament, akims, the Atameken and national companies need to carry out the relevant work. Today, I have outlined a number of other issues that need to be addressed. In conditions of ongoing constitutional reforms and a complicated geopolitical situation, everyone needs to step up and work together,” Nazarbayev concluded.