ASTANA – Construction has started on Abai Arena, a complex with an entertainment and sports centre in the new district in Semey. The facility is dedicated to the city’s 300th anniversary. 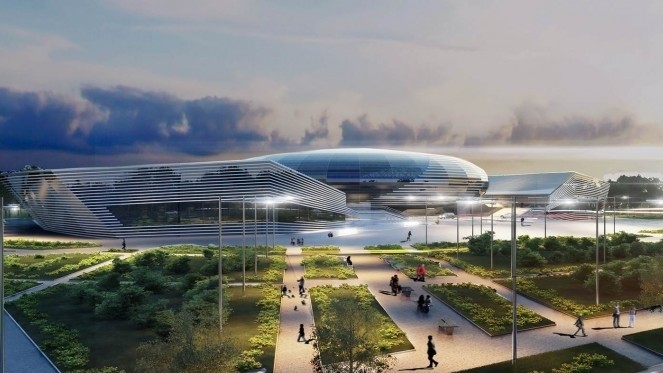 “Abai Arena will set the trend for the development of culture and sports in the city with its unique architectural design and functionality. It will be possible to organise various events in huge halls and use the swimming pools for both sports and recreation. Construction will take place in the Karagaily microdistrict as a paragon of various forms of modern architecture,” said East Kazakhstan region Akim (Governor) Danial Akhmetov.

The complex will measure approximately 14,000 square metres. The exterior will include aluminium panels and a media façade.

Abai Arena will be located on the bank of the Ertis (Irtysh) River near the pine forest.

“This will be a beautiful microdistrict. We need to construct apartment buildings of about 12 floors around the complex. The façade should be of bright colours so that people will be pleased with the microdistrict and the city as the whole,” said Akhmetov.

Two Semey construction companies have been commissioned for the first nine-storey residential buildings, according to the regional press service. The brick cladding and window installation have been completed and the internal finishing works are underway.

A kindergarten for 320 children, built under a public-private partnership, will be commissioned later this year.

Karagaily microdistrict will also include 98 apartment blocks, a school for 1,200 pupils, 720-student intellectual school, two additional kindergartens and hospitals. Wide roads, pedestrian areas and parking lots will be built for the convenience of residents. During construction, facilities for workers, including hostels for 200 people and canteens providing four meals a day, will also be erected.