By Special to The Astana Times by George Baumgarten, United Nations Correspondent in Central Asia on 30 January 2018

NEW YORK – In a first for both the U.N. Security Council and the Central Asian region, Foreign Minister Kairat Abdrakhmanov presided over a meeting of the council devoted to “Building Regional Partnership in Afghanistan and Central Asia as a Model to Link Security and Development.” The day’s programme featured a briefing by Secretary-General Antonio Guterres, statements by all five Central Asia Republics, and by various other regional powers. Conducted at the ministerial level by invitation of the Kazakh presidency, the meeting also had the presence of several foreign ministers, including Sergey Lavrov of the Russian Federation. 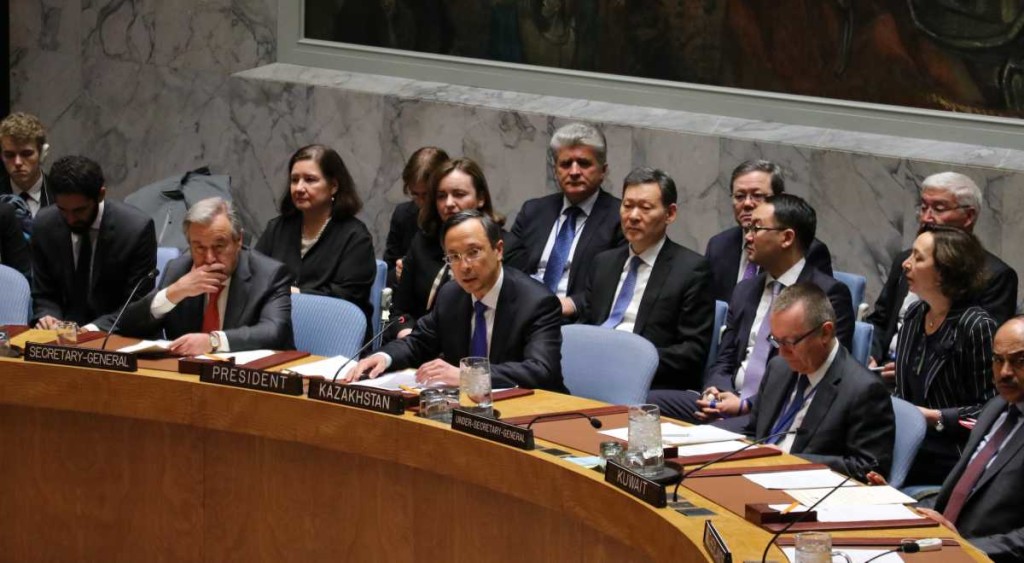 The day’s programme was organised as an open debate, to be followed by a UNSC presidential statement. It stressed the importance of the U.N.’s Regional Centre for Preventive Diplomacy in Central Asia (UNRCCA), as well as its Assistance Mission in Afghanistan (UNAMA). Kazakhstan had circulated a concept note for the debate in December, which particularly emphasised regional integration, terrorism and economic development. During the negotiations over the statement text, the U.K. and the Netherlands added language about the upcoming parliamentary and presidential elections, to be held this year and next, respectively.  During the debate, all 15 council members spoke, as well as the European Union and all four Central Asian states.

Secretary-General Antonio Guterres, who always speaks first, presented his report on the subject. On this occasion, he noted that the Central Asian countries had an important development role, particularly regarding the 2030 Agenda for Sustainable Development.  He said that trade in these “Silk Road countries” (referring to the old trade route to China), had fallen in the nearly three decades since independence. Obviously, however, Afghanistan’s fight against violent extremism was of great concern to the entire region. This has given rise to the U.N.’s Global Counter-Terrorism Strategy and its application in Central Asia.

Speaking first among council members, Abdrakhmanov told of Kazakh President Nursultan Nazarbayev’s vision: to create in Central Asia a zone of peace, security and cooperation. He said that the peace process for Afghanistan must be an Afghan-led and Afghan-owned one and lauded U.S., Russian and Chinese efforts toward that goal. Kazakhstan, he said, has an obvious interest in Afghan peace, since it is a regional neighbour. The Afghan peace process should be based on three pillars: 1) The security/development nexus, 2) Regional cooperation and 3) Coordinated efforts, led by agencies of the United Nations.

Russian Foreign Minister Sergey Lavrov told of the connection between terrorism in Afghanistan and its long-established illicit drug industry. He spoke of the importance of regional economic ties, as well as constructive dialogue between all parties.

U.S. Deputy Secretary of State John Sullivan said that the wider international community was clearly committed to Afghanistan, but emphasised that the vital process of reconciliation there must – of necessity – be an Afghan process. The place for progress was the negotiating table, he said, not on the battlefield. He repeated the willingness of the U.S. to work with all parties, including especially Pakistan, which sits on Afghanistan’s eastern border.

Several of the council’s European members presented their view of Afghanistan and the wider region. Andre Haspels, Dutch deputy foreign minister, said his country supported Afghanistan, but that any peace process, in a litany already repeated by others, must be Afghan-owned. U.K. Minister of State for Asia/Pacific Mark Field noted that Britain’s non-combat troops had been playing a crucial role in the country, largely through the North Atlantic Treaty Organisation (NATO). And he underscored the importance of “credible and timely” elections.

Sweden’s Ambassador Olof Skoog complimented all the Central Asian countries for their efforts at regional integration and cooperation, particularly with Afghanistan. Francois DeLattre of France likewise emphasised the upcoming elections, and particularly pointed to women and children, the most frequent victims of Afghan violence.

Belgium’s Marc Pecsteen de Buytswerve emphasised a potential UN role, particularly on the problem of returning foreign terrorist fighters. And he noted the importance of Afghanistan and Central Asia, as a long-established crossroads between nations. Christoph Heusgen of Germany pointed to his country’s strong commitment to Afghanistan but noted that its conflict could only be settled by negotiations.

Each of the other four Central Asian republics contributed its perspective, in turn. Abdulaziz Kamilov of Uzbekistan said there must be an organised Afghan reconciliation process. To that end, his country was organising a conference on Afghanistan in late March. Kyrgyzstan Foreign Minister Erlan Abdylayev said that only political means held promise for a solution in Afghanistan, but saw no recent progress toward that goal, due in large part to a “lack of political confidence.” And he felt it was vital that the Central Asian states become involved. Tajik Foreign Minister Sirodjidin Aslov noted that Tajikistan shares a border with Afghanistan, which gave his country a larger vital interest in events and developments there. And he emphasised the vital importance of improving the country’s education system. And finally, Aksoltan Ataeva, Turkmenistan’s permanent representative to the UN, pointed to her country’s extensive peace-building experience, and particularly lauded the efforts and actions of the United Nations Center for Regional Preventive Diplomacy for Central Asia (UNRCCA).

In the end, the council produced a Presidential Statement on Afghanistan and the wider Central Asia region. It repeated that there can be no purely military solution in Afghanistan and praised on-going international efforts at the country’s stability. It expressed concern at security threats from Da’esh and Al Qaida, and emphasised the need for “regional, interregional and international cooperation.” It stressed the importance of involving women in all decision-making. And it particularly noted and lauded the efforts at cooperation and integration of the Central Asian states.

These efforts may well hold out some hope for Afghanistan’s future.