By Elya Altynsarina in International on 19 January 2018

ASTANA – Kazakh President Nursultan Nazarbayev chaired high-level briefing of the UN Security Council on the non-proliferation of weapons of mass destruction and related confidence-building measures on Jan. 18 in New York.

He started his opening speech by thanking the international community for its confidence in Kazakhstan and in its peaceful policy. “As the first country from Central Asia ever elected to the council, we became the voice of our people in this high office”, said the President.

He thanked UNSC member states for their close cooperation in making Kazakhstan’s efforts and chairmanship of three UNSC sanctions committees as successful as possible. Nazarbayev recalled announcing 25 years ago at the 47th UN General Assembly session the initiative to build a regional structure on security and confidence building, which has now brought 26 countries, from Israel and Egypt to India and Pakistan, together as part of the Conference on Interaction and Confidence Building Measures in Asia (CICA).

“However, after a quarter of a century, I am back in the UN for my country’s presidency at the council, and I must admit that the issue of mutual confidence at both bilateral and global levels is acute and becoming more urgent”, the President said. In his view, confidence building measures shall be a top priority on the global agenda as they represent a vital element for maintaining global security architecture and consolidating peace across the globe. 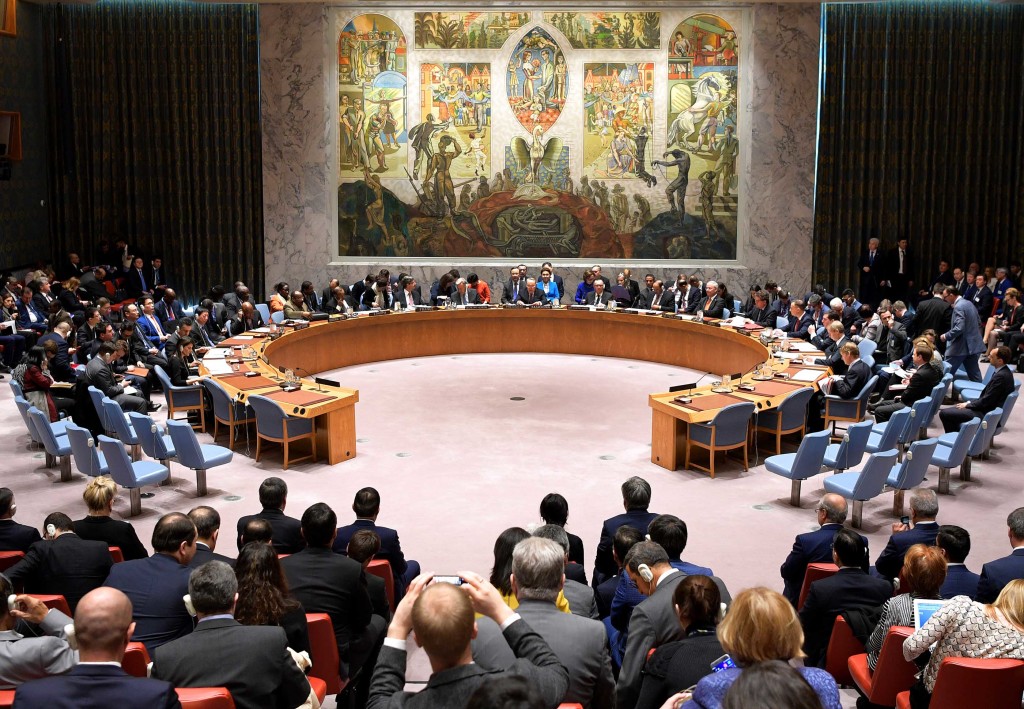 According to Nazarbayev, the confidence building measures have proven their efficiency throughout the history.

Firstly, they helped prevent the mass destruction in the second half of the 20th century, when humanity was on the verge of a new, large-scale war. “To save subsequent generations from the scourge of war” – as it is put in the UN Charter,  is our common goal,” the Kazakh President said. “Kazakhstan has proven its commitment to the goal by voluntary nuclear disarmament, which has been highly appraised by the world.”

Secondly, mutual confidence will contribute to the creation of a new model of international cooperation. Nazarbayev mentioned the establishment of the IAEA Bank of Low Enriched Uranium in Kazakhstan as an example of such cooperation. Kazakhstan is not new to strengthening the non-proliferation regime, and this case is another step among many.

Therefore, and thirdly, Kazakhstan’s nuclear disarmament experience can serve as a guideline for those willing to join it: this nation has established, and strengthened its independence, reached non-aggression pacts, and has built its global recognition by denuclearisation, he noted. “We call for the leadership of North Korea to follow this lead”, Nazarbayev said.

Fourth, the scientific and technological progress, as well as globalisation, make the WMD non-proliferation a matter of human survival.

The growth in the number of countries possessing WMD creates the risk that nuclear, chemical, biological and radiological weapons might fall into the wrong hands, Nazarbayev said adding that he is concerned that the current legal framework for ensuring nuclear security may not prevent the expansion of the so-called “nuclear club”. He, therefore, suggested rethinking the existing the non-proliferation regime based on the Treaty on the Non-Proliferation of Nuclear Weapons (NPT) and opined that new multilateral political decisions may be required. 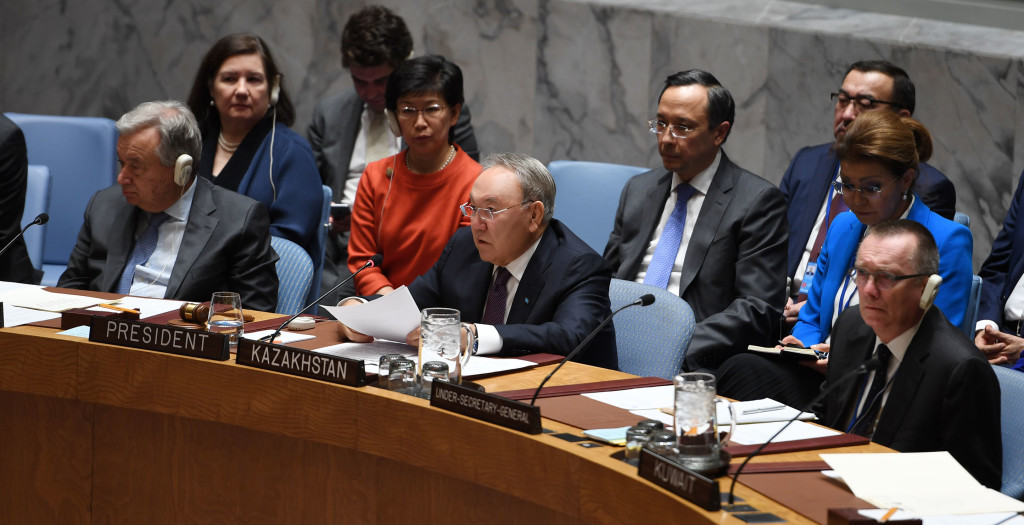 In this regard, in his capacity of the President of Kazakhstan, Nazarbayev made a following statement on perspective measures concerning the non-proliferation and weapons of mass destruction.

First, a withdrawal from the NPT needs to be made more complex. The example of North Korea may push others to seek possessing the nuclear weapons. “Without questioning the NPT, I propose to draft a special resolution of the [UN Security] Council that would define the consequences, including sanctions and enforcement measures for NPT violators,” the President stated.

Second, working mechanisms of applying tougher measures for the acquisition and proliferation of WMD should be worked out, strengthened by separate council resolutions. Nazarbayev suggested that the countries voluntarily renouncing their nuclear weapons shall receive strong guarantees of nuclear states.

“Third, either success or failure to update the global security system relies on our ability to overcome militaristic anachronisms: we shall leave behind the division into military blocs that became both provocative and meaningless”, – the speaker said, adding that the international community could put a deadline for solving the lack of mutual confidence and denuclearization by 100th anniversary of the UN.

The initiative has been earlier announced in Nazarbayev’s 2016 Manifesto “The World. The 21st Century.”

Fourth, the President emphasized the need to bring political trust and a systemic dialogue back to the international affairs, mentioning the usefulness of Iran nuclear deal and his hope that the signatories of what is known as the Joint Comprehensive Plan of Action will be able to overcome difficulties and keep the deal. Nazarbayev suggested using a similar approach to settling the North Korean issue.

“We stand for granting by ‘the nuclear five’ security guarantees to the DPRK as an important condition for creating an atmosphere of trust for Pyongyang to return to the negotiating table,” the President stressed. Should the need arise, Kazakhstan is willing to provide a platform for negotiations, he said reminding the meeting participants that Kazakhstan has successfully hosted talks aimed at ending the violence in Syria, and that seven rounds of Astana talks have contributed to the noticeable decline in violence there.

Fifth, based on the experience of Central Asian countries in establishing a nuclear weapons-free zone in the region, Nazarbayev called for applying a similar concept to the Middle East where a similar zone was called for in several decisions of the NPT review conferences.

Sixth, taking into account the height of modern scientific achievements, the international community must strengthen its control of arms race. “I believe that confidence-building measures are also needed in forging common approaches to prevention of militarisation of outer space”, Nazarbayev said, adding that that could be the topic for a separate discussion.

He underlined, however, that these initiatives and the issue of WMD non-proliferation depend on mutual understanding and trust between nuclear powers, as well as every nation of the world.

“The global community is a single body, strong in its diversity and pluralism that can survive and strive when there is balance and harmony among nations and peoples living on this planet,”  Nazarbayev said, praising also the role and the historic mission of the Security Council.

He concluded his remarks by expressing his hopes in trust, willpower and intelligence of the mankind multiplied by the energy of collective action in choosing the right direction of peaceful coexistence.

In his turn, UN Secretary-General António Guterres said that “despite the Council’s efforts…, global anxieties about nuclear weapons are the highest since the Cold War.” Complementing the words of Nazarbayev, Guterres said he was concerned that the existing arms reduction measures are under threat, pointing out especially the decreased confidence between the U.S. and the Russian Federation on nuclear and other issues. He urged that a taboo on chemical weapons broken during the Syrian conflict must unite the world, including working on preserving the Iranian deal.

In current geopolitical context, according to Guterres, military budgets are increasing, and coupled with serious growth in regional tensions.

In this light, he finds the latest decision of North Korea to participate in upcoming Winter Olympic Games very encouraging. “Trust is essential. But confidence can be undermined by bellicose rhetoric, confrontational approaches, the absence of communication channels, and inflexible positions”, the UN top official said. In conclusion, he called on all nations to assist those in need of capacity-building for the implementation of their disarmament, arms control and non-proliferation commitments.

Alongside President Nazarbayev, President of Poland Andrzej Duda attended the meeting marking the start of his country’s non-permanent membership in 2018.

Duda commended Kazakhstan for past and current initiatives in denuclearisation, and underlined of his country’s commitment to strengthening the non-proliferation and disarmament. In his remarks, he expanded on what he termed as three core flaws of NPT, which are (1) no requirement for a country to join the Treaty giving an “easy way-out” to participants; (2) no sanctions regime provided for Treaty violations: and (3) the fact that the inspections procedures of peaceful nuclear developments are voluntary. Despite these laps, the Polish leader admitted that, “it is the only real instrument, which brings us closer to the world without nuclear weapons.”

Since his country is going to chair, as a non-permanent member of the council, the Second Preparatory Committee for the 2020 Review Conference of the NPT, as well as the Hague Code of Conduct against Ballistic Missile Proliferation, Duda said he was willing to focus on maintaining NPT credibility, and supporting mutual trust. He concluded by inviting all nations to celebrate the upcoming Games in South Korea in the atmosphere of peace and friendship between all nations.

Another high-level participant of the meeting, Foreign Minister of Russia Sergei Lavrov spoke about the 50th anniversary of the NPT in June 2018, and said his country supports the resolution of all risks related to proliferation within the framework of that Treaty.

Having outlined his country’s objections to the recently adopted Treaty on the Prohibition of Nuclear Weapons, he reiterated that the complete renunciation of nuclear weapons needs to undergo in a context of engagement of all parties including nuclear powers, meaning that everyone must obtain equal and impartial security guarantees. Lavrov expressed equal concern about the future of Iranian deal as well as its effect on North Korean nuclear policy, and stated his support for the idea of holding a conference on establishing a WMD-free zone in the Middle East.

Meanwhile, U.S. Permanent Representative to the UN Nikki Haley began her remarks by acknowledging Kazakhstan’s role and achievement in the history of non-proliferation, and the leadership of President Nazarbayev in setting an example to the world.

“The United States continues to lead in efforts to stop the spread of nuclear weapons,” Haley said, adding later that “there is no greater threat to the international nuclear nonproliferation regime than that posed by North Korea”.

She urged the council to stand against such challenges to protect the “example that Kazakhstan set, and the efforts of so many others to curb the spread of nuclear weapons.”

The U.S. ambassador wrapped up by saying that among all important issues the council observes, the one of nuclear, biological, and chemical weapons non-proliferation stands out as a major one. Therefore, she encouraged all nations to join in the creation of security environment that would benefit the non-proliferation.

Following the briefing, Kazakhstan, as the UNSC president, issued its wide-ranging statement, agreed upon by all 15 member states, which outlined principles and steps the international community needs to be following and taking to prevent further growth of the threat to the world posed by the proliferation of weapons of mass destruction. The statement has also heavily focused on conflict prevention measures and pledged continued support for the UN Secretary-General’s efforts in better adapting the United Nations to modern challenges.