ASTANA – As President of the United Nations Security Council (UNSC) for the month of January, Kazakhstan chaired Jan. 25 the quarterly UNSC open debate focusing on the Middle East, the Israeli-Palestinian conflict. 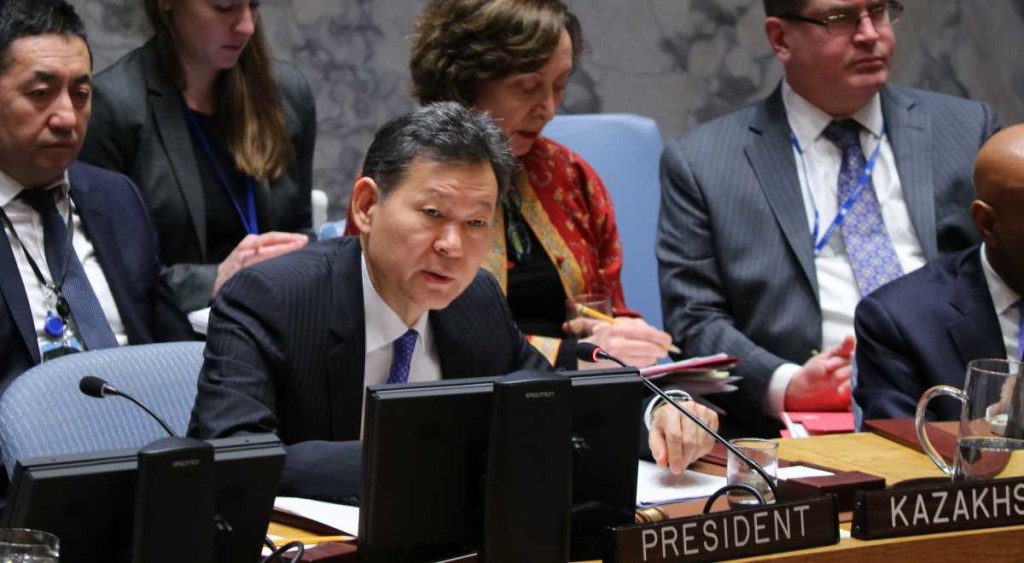 The debate was the first meeting focusing on that conflict since the December 2017 vote on a resolution on Jerusalem’s status.

Special Coordinator for the Middle East Peace Process Nickolay Mladenov briefed participants via video teleconference on the situation in the Middle East, focusing on Iraq, Syria, Yemen and the Israeli-Palestinian conflict.

“Twenty-five years after the Oslo Accords, we are at a critical point in the peace process… The uncertainty and volatility of the current environment is hardening positions and sharpening the rhetoric on all sides, a situation that plays directly into the hands of extremists and increases the risk of another conflict,” said Mladenov regarding the Israeli-Palestinian situation.

The issue, especially the status of Jerusalem, was subject to particular attention. Council members urged the leaders of the two states to follow the principles of international agreements regarding the inalienable right of Palestinians to statehood and Israel’s right to security.

Council members called for the resumption of bilateral negotiations without preconditions. The goal of the talks, according to the UNSC, should be the restoration and facilitation of the peace process in accordance with Security Council resolutions, the Madrid Principles, the land-for-peace formula, the road map and the Arab Peace Initiative.

Kazakh Permanent Representative to the UN Kairat Umarov stressed Kazakhstan’s continued commitment to the two-state solution and the need to implement the provisions of UN Security Council Resolution 2334 that demands Israel cease all settlement activities in the Palestinian territories. Both sides were also called upon to avoid unilateral actions that could delay the achievement of an early and fair resolution of the conflict.

Umarov cited Kazakh President Nursultan Nazarbayev’s Jan. 18 appeal during a high-level UNSC debate to resolve all international issues through confidence-building measures. That, according to Nazarbayev, is one of the main conditions for achieving lasting peace and security, including in the Middle East.

Council members stated both sides should refrain from provocative actions and rhetoric and take the necessary steps to resume direct negotiations and fulfil their commitments. Delegations noted the need to agree on principles to advance peace and to establish a system of negotiations toward the two-state solution.

Most of the states that took part in the debate, which was more than 50 representatives of member states and regional organisations, expressed concerns over the reduction in U.S. financial assistance to the UN Relief and Works Agency for Palestine Refugees in the Near East (UNRWA) announced by the Trump Administration Jan. 16. The aid covers 50 percent of the needs of Palestinian refugees in the Middle East. This step, according to many debate participants, will worsen the already tough situation for refugees and lead them to radicalisation.

In a broader context of the Middle East debate, the Kazakh delegation noted its commitment to Iraq’s sovereignty and integrity, the importance of promoting a comprehensive political dialogue between various groups in Iraq, as well as between Kurdish Erbil and Baghdad.

Regarding the situation in Yemen, the Kazakh delegation stressed there is no alternative to a political solution to the conflict and said the parties should facilitate the delivery of humanitarian aid.

Astana also welcomed the news about the date for parliamentary elections in Lebanon, which should contribute to the stability and political consolidation of that country.

The Kazakh delegation also called on the people of Libya to follow the path of dialogue and confidence-building measures to create an effective government of national unity.