ASTANA – The achievements and direction for the development of the Kazakh capital were discussed Jan. 25 as part of the city’s upcoming 20th anniversary. The forum called “Astana – 20 years of development and innovation” focused on the city’s innovations, investments and growth within the smart city concept. 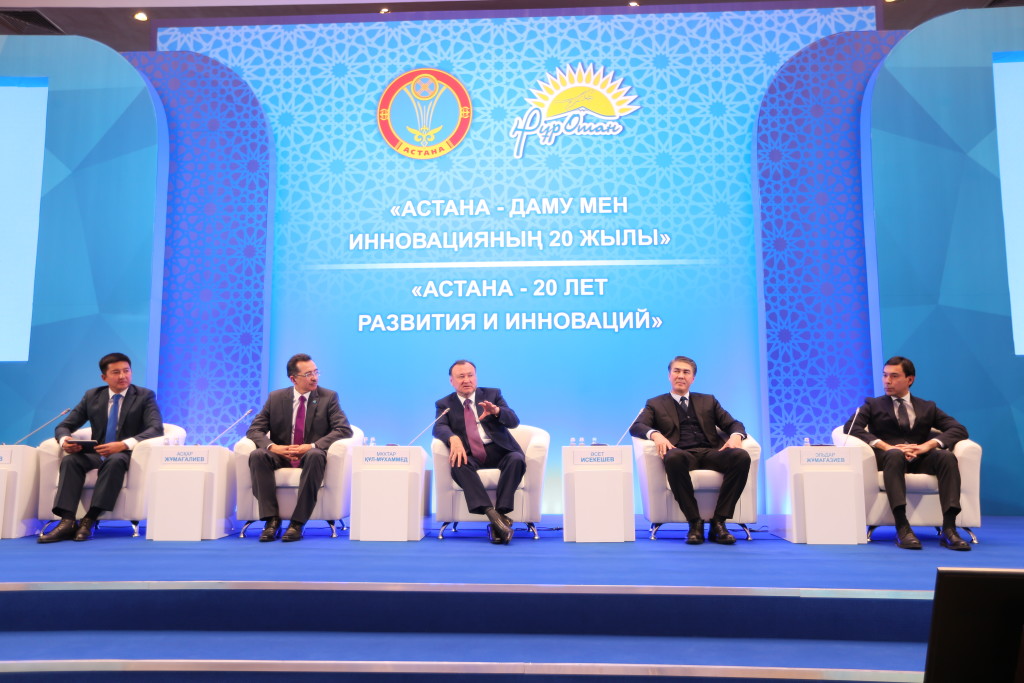 “Today, Astana, built by the political will of our head of state, firmly established itself on the world map as an active participant in global political processes, peacekeeping initiatives and became a national idea for all the citizens of Kazakhstan. Astana is the epicentre of interconfessional intercultural dialogue, the venue for major international forums of a global scale. Astana has become a real national brand, attracting foreign investors from around the world, and the innovative spirit of the new capital of Kazakhstan is confirmed by the EXPO 2017 international specialised exhibition, the theme of which was Future Energy,” First Deputy Chairman of the Nur Otan Party Mukhtar Kul-Mukhammed told the gathering.

He talked about the achievements of the capital over the last two decades and stressed that Astana opened a new era in the history of an independent Kazakhstan. He expressed support for introducing modern technologies in Astana, noting that Smart City technology will drive regional development, spur innovation and improve the lives.

“Building Astana as a Smart City will create a fundamentally new look of our capital with clean ecology and high standards of quality of life. Today, the investment climate of the country is formed by large megacities, investors come to where it is convenient, comfortable and safe. Therefore, the Nur Otan party will promote the full support and dissemination of the experience of smart city and digital technologies in other cities of Kazakhstan,” he added.

The party official also highlighted the joint project of the party and city administration, within which they plan to support 20 new technological start-ups.

“We organise the traditional competition Nurintech, which attracts young inventors from different regions of Kazakhstan who participate every year, their ideas really amaze. By their projects, they can make a significant contribution to the development of the country’s economy,” he said.

Akim (Mayor) of Astana Aset Issekeshev said that over 20 years the gross regional product of the city grew almost 190 times, reaching about 5 trillion tenge (US$15.5 billion). According to him, such indicators are the world’s economic precedent.

“The revenues to the state budget grew 80 times from 13 billion (US$40 million) in 1997 to 1 trillion tenge (US$3.1 billion) last year. Over 20 years, 1.6 trillion tenge (US$5 billion) was invested in housing construction, while 1,265 multi-apartment houses were put into operation with almost 180,000 apartments,” said Issekeshev.

The annual volume of investment in fixed assets has increased 44 times since 1997, and, for 20 years, has amounted to almost 8 trillion tenge (US$47 billion).

“In the sphere of investments, new economic strategies envisage a transition from budgetary investments to private ones, including foreign ones. In the portfolio, we have about 60 projects with the volume of private investments of more than $3 billion, including more than 30 transnational companies. I want to say that Astana is developing successfully. There are specific tasks set by the President and his most recent state-of-the-nation address entrusts us with a big responsibility, because Astana was defined as the standard for Smart City (technology). I am confident that all our projects and all tasks will be realised with the support of our government and the Nur Otan party,” said Issekeshev.

The current concept of the Smart City covers all spheres of the city’s life, including transport, education, healthcare, urban services, security and urban infrastructure.

The other significant topic of the forum was innovation. According to Issekeshev, last year the most significant project was the introduction of Sergek, which includes an intelligent video monitoring, analysis and forecasting system.

He also briefly described the development strategy of Astana, which provides for the transformation of the city into a global, smart, sustainable city. The city promises to follow the principles of the United Nations with an emphasis on social development and ecology. It is planned to introduce digital technologies into all objects of the municipal economy – from the system of state administration to the management of energy, transport, health and education.

“Today, there is a trend in the development of countries, when it is not an industry, but cities that are the main drivers of economic growth. It is the global cities that ensure successful competitiveness. We all know the cities of South-East Asia, such as Singapore, Hong Kong, Shanghai and Dubai in the Middle East. That is, each region has a city that is a hub, a centre for attracting tourists, investors and innovators. Therefore, all infrastructure that is in the city, such as a new airport, a new railway station, a large number of hospitals, hotels, restaurants – and security allow Astana to become a global city in the Eurasian space,” explained Issekeshev.