ASTANA – A Jan. 18 bus fire in the Aktobe region in north-western Kazakhstan killed 52 Uzbek nationals on their way to the Russian city of Samara. Only five, including three Kazakhs and two Uzbeks, escaped. 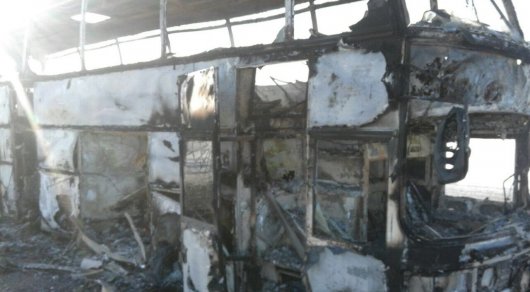 Fire broke out in the passenger bus carrying Uzbek workers from Shymkent city in southern Kazakhstan, close to the Uzbek border, to Russia, a major destination for Uzbek migrant workers leaving the country seasonally in search of bigger labour opportunities amidst poor economic situation in their home country.

The incident occurred at 10.30 a.m. in the Irgiz district on the 1,086-kilometre of the Shymkent-Samara highway, according to Interior Ministry Emergency Situations Committee spokesperson Ruslan Imankulov.

All 52 people killed in the fire were men and the majority were natives of Namangan, one of the Uzbek regions located in the Ferghana Valley in far eastern part of the country. The youngest passenger was 19 years old.

A government commission was set up to investigate the circumstances and causes of the incident.

In the Jan.19 statement, Kazakh Interior Affairs Deputy Minister Yerlan Turgumbayev noted the bodies were transported to Uzbekistan, where experts will proceed with forensic DNA profiling.

While the investigation is still underway, Turgumbayev said the fire started inside the bus and cited “careless use of fire” as the main cause behind the incident.

“A blowtorch was found on the site of the incident, which is used with flammable gas mixture, in particular petroleum. At the same time, the investigation and testimonies revealed there was a plastic five-litre tank full of petroleum,” said Turgumbayev

“This version is proved by the testimony of five survivors. The bus engine died and it was cold inside, the blowtorch was used as a heater. It had been working for more than two hours,” he noted.

The tank with petroleum was spilled by accident, it caused acrid smoke spreading inside the bus, which, according to the preliminary conclusions, poisoned the passengers first.

“Secondly, when the door opened, oxygen came in and the bus ignited from the inside. This did not let the passengers escape. The bus had two floors, people were on the second, while the luggage were on the first,” said Turgumbayev ruling out the possibility of road accident or any other criminal activity.

Five survivors were taken to the hospital and are going through the treatment, according to Kazakh Healthcare Vice Minister Alexei Tsoi.

“All patients that were transported by sanitary aviation were fully diagnosed and checked. In general, the situation is stable and each of them feels better now. Psychologists worked actively, because they needed to get over this morally. They are going through a huge stress. Patients are now active and nothing puts their health in danger. They are ready to leave the hospital,” said Tsoy.

Mirziyoyev noted the tragedy demonstrates the salient issues in Uzbekistan. “What happened demonstrates many things, and one of them is that we have huge debts in front of the people. They have to search for jobs in other countries, because we did not create proper conditions for them (in Uzbekistan),” he said in public remarks after the tragedy.