By Zhanna Shayakhmetova in International on 9 December 2017

ASTANA – More than 60 percent of Kazakhstan’s public services are provided in electronic format which has reduced the level of domestic corruption by two-thirds, said State Secretary Gulshara Abdykalikova at the Dec. 8 Modern Anti-Corruption Standards and International Cooperation Development conference in the capital. The event was held one day prior to the UN-recognised International Anti-Corruption Day, marked annually since 2004. 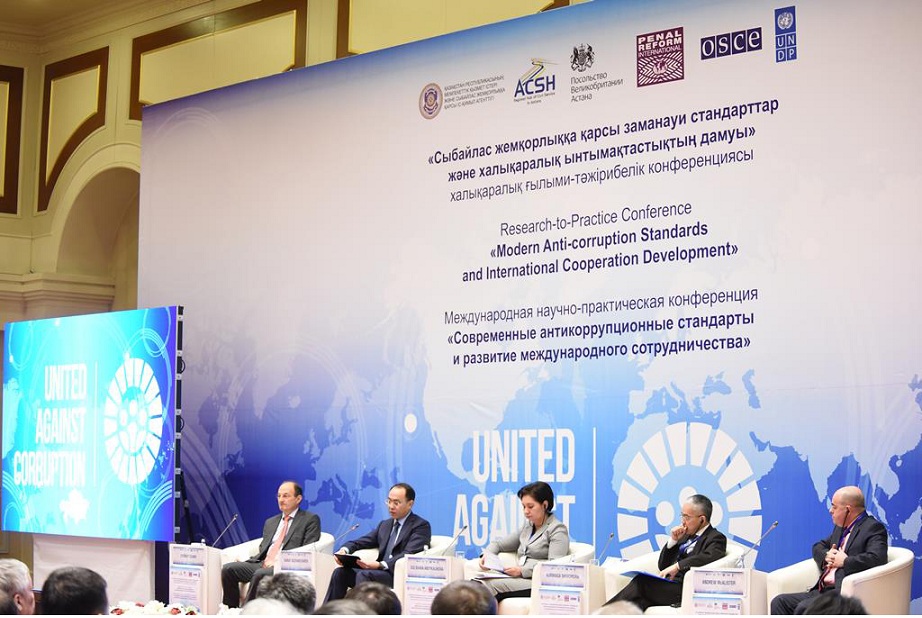 “One of the main tasks is to use a wide array of means of media communication to involve the entire society in the fight against corruption, to form a strong immunity to corruption and to develop a sustainable anti-corruption culture in the context of promoting digitalisation in Kazakhstan,” she said. 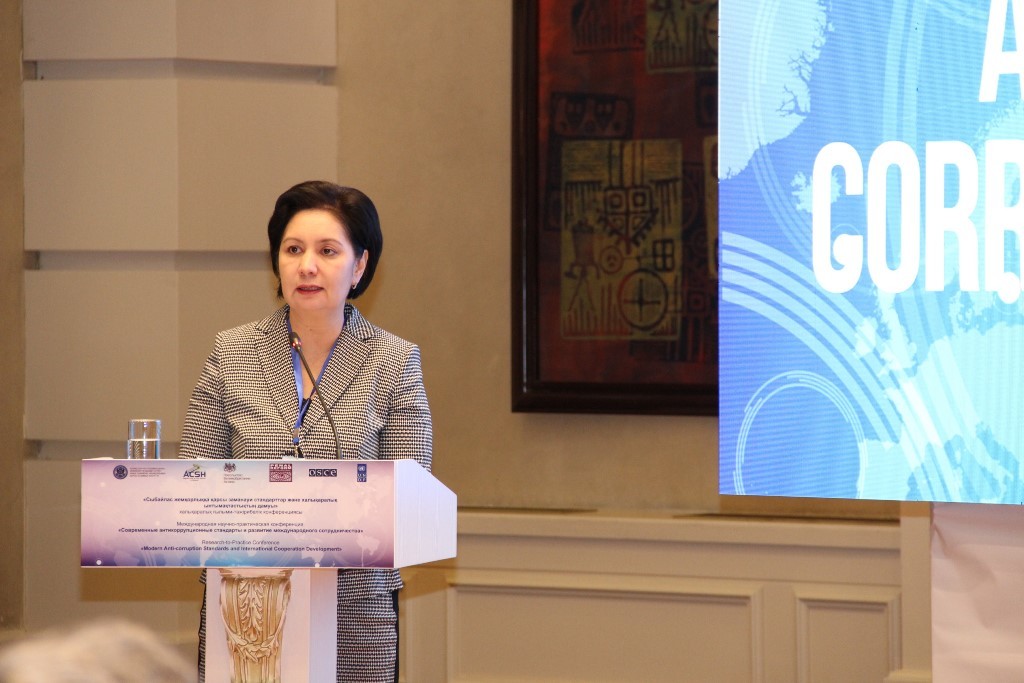 Fifty-nine laws have been adopted as part of the institutional reforms, said Chairman of the Agency for Civil Service and Anti-Corruption Kairat Kozhamzharov.

The transparency of state bodies’ activities and openness of public and private quasi-sectors are ensured. The administrative barriers were significantly reduced and constructive dialogue with civil society widely implemented. New prevention institutions and anti-corruption monitoring were introduced.

“More than 10,000 people have been convicted for corruption crimes, including two former prime ministers, 17 ministers, chairpersons and deputy chairpersons [of state agencies], 15 akims (governors and mayors), eight heads of national companies and eight officials from the law enforcement bodies since 2001,” he said. 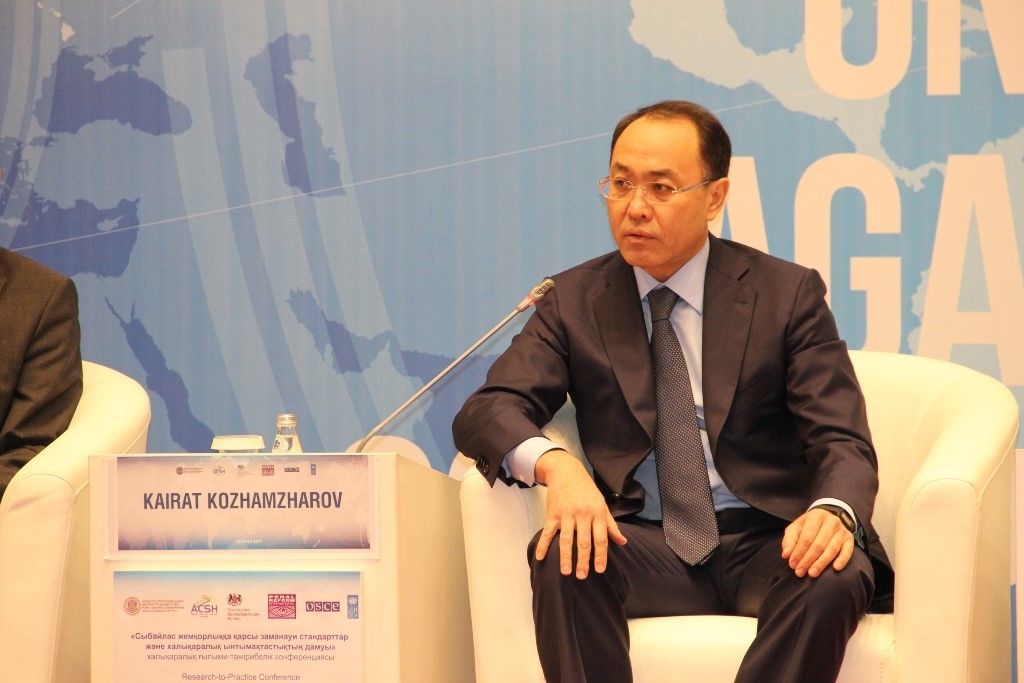 The nation is resolutely opposed to bribery and corruption, an important priority included in the Kazakhstan 2050 development strategy.

“To reveal the whole chain of the criminal scheme from executors to organisers is the priority. It is important to identify public sector corruption and prevent capital withdrawals at an early stage. Fugitive criminals and stolen assets are topical issues for each country. The world community is taking measures right up to the disclosure of data of account holders in foreign banks. Kazakhstan welcomes and fully supports these efforts and is ready to cooperate with other countries,” Kozhamzharov said.

The United Nations Convention against Corruption is the international legal platform for cooperation. Agreements on the issue and return of assets have been concluded with more than 40 nations, including Lithuania, Poland, South Korea, Spain, Turkey and the United Arab Emirates, he explained. 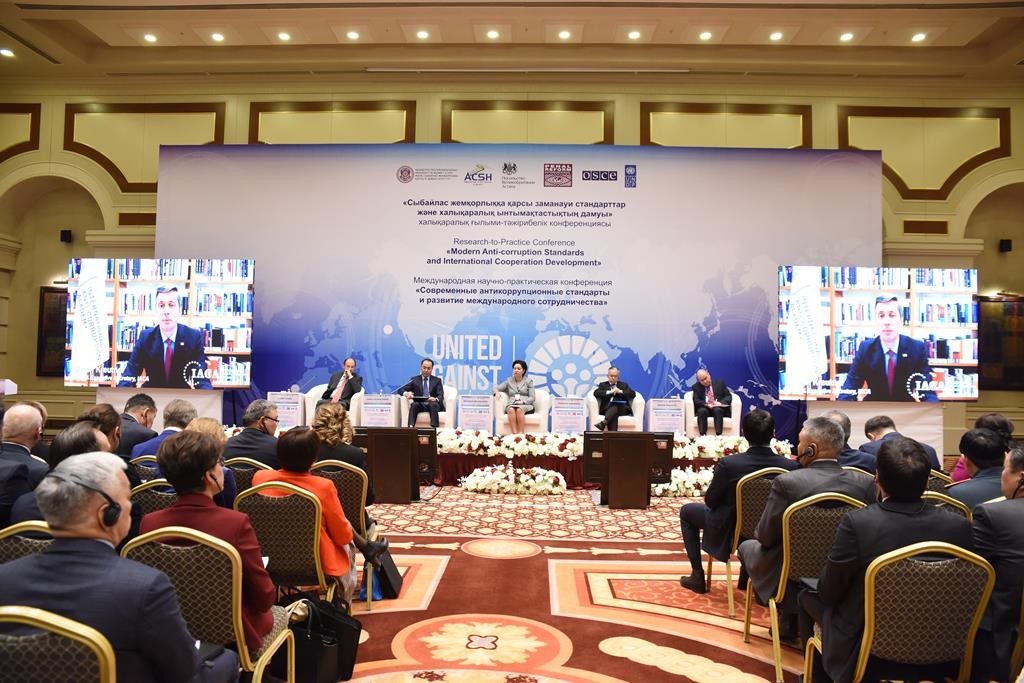 During the past 10 years, 152 of 205 suspected corrupt officials hiding abroad were returned to the country. Former ministers and local governors who have stolen more than $8 billion, however, are hiding abroad, including fugitive banker Mukhtar Ablyazov and Viktor Khrapunov (former Almaty mayor and East Kazakhstan region governor) and his wife Leila Khrapunova, Kozhamzharov said.

“Despite the politicisation of their status, they won’t escape prosecution. As a result of our partnership with foreign organisations, every corrupt fugitive will face the court. The state should unite efforts in excluding double standards when extraditing criminals and returning assets,” he stressed.

The National Anti-Corruption Bureau, which is part of the agency that Kozhamzharov leads, uncovered more than 8,000 corruption cases and prosecuted approximately 3,000 individuals who caused 60 billion tenge (US$180 million) in damage, including the heads of state and regional executive bodies, the bureau chief Talgat Tatubayev announced at the event. 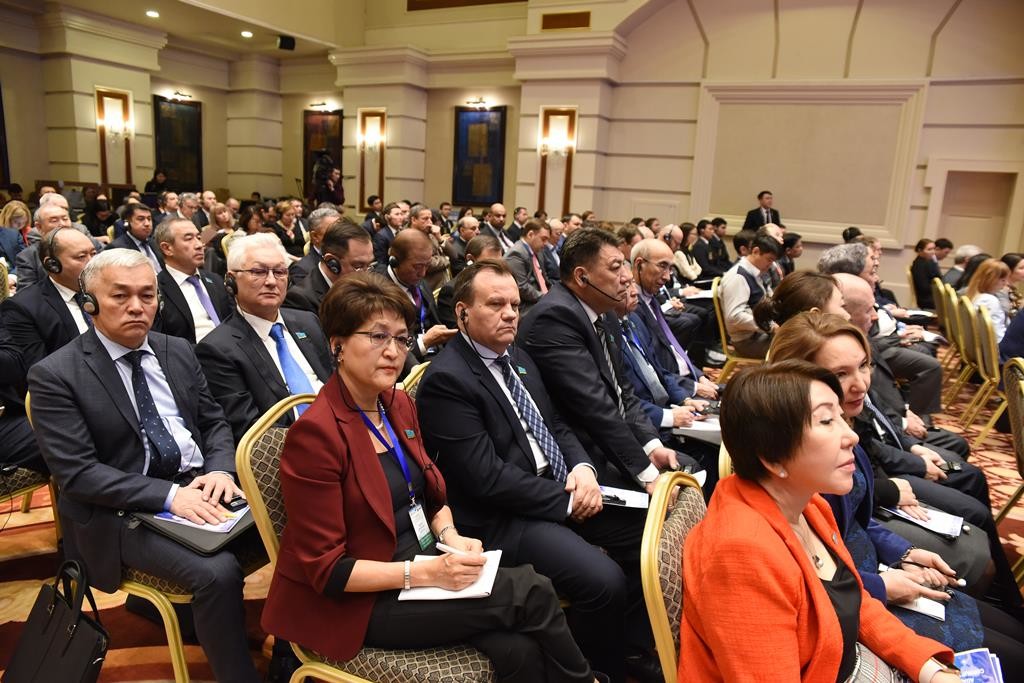 “UN Secretary-General António Guterres sent a powerful message to the international community stating that corruption hits the poor, the weak and the most vulnerable of all. It can deny people access to health services, schools and economic opportunities. It can deny them hope of a better future,” he said.

Businesses and individuals pay an estimated $1.5 trillion in bribes every year, Shimomura continued. The figure represents about 2 percent of the global GDP and ten times the value of official development assistance.

“The fight against corruption is one of the key priorities in the state policy of Kazakhstan encapsulated in a national anti-corruption strategy and other relevant documents. To date, a comprehensive legal framework has been formed. There is a shift in emphasis from law enforcement methods to preventive measures… Great attention is paid to eliminating the root causes of corruption and to reduce corruption risk,” he noted.

The UN Office on Drugs and Crime has supported Kazakhstan’s asset recovery efforts through its Stolen Asset Recovery Initiative in cooperation with the World Bank.

“Despite our joint efforts and achievements and the progress that is being made, still much more can be done to eradicate corruption from Kazakhstan. This requires persistent and consistent implementation of our institutional reform. These reforms, when implemented successfully, will enable effective public control, reduce corruption risk and limit the space for corruption. It is everyone’s responsibility – the government, civil society, organisations, the private sector, media, public and general public, including the young people who will play a pivotal role in shaping our world hopefully free of corruption in the years to come,” said Shimomura.

No country is immune from corruption, noted British Charge d’Affaires Andrew MacAlisster. No country can feel complacent or comfortable and “it’s only through collective action working internationally and in partnership that governments can stand a chance of tackling it,” he said.

“Corruption is a disease. It hinders growth, it undermines confidence in the rule of law, it eats away at the very fabric of our society and it chokes the growth and development of our very livelihoods. It fuels conflict and it leads to ever more serious criminality. So, beating it really matters to the UK just as it does to Kazakhstan. It matters to us all, wherever we are in the world,” he added.

The British embassy in Astana is working on a project with Penal Reform International’s Central Asia office designed to increase accountability and good governance in the law enforcement system specifically by targeting corruption.

“To be successful, this project relies on the support of the Agency for Civil Service and Anti-Corruption of Kazakhstan and the Ministry of Internal Affairs and I can report that their on-going work to eradicate corruption in the law enforcement system makes us actual partners. We are working successfully together on this. Our shared goals to strengthen government accountability and its capacity to combat corruption and to enhance interaction between the government and civil society in Kazakhstan are another key way of tackling this,” said MacAlisster.

The UK welcomes the national anti-corruption strategy and programme that are driving the institutional reforms enabling the country to effectively counter corruption.

“We are proud to be working as partners on the Astana International Financial Centre (AIFC) in recognition of the fact that English law is a tried and tested means of dealing with corruption and malpractice in the international financial sphere,” he added.

The conference continued throughout the day in separate sessions each producing a set of recommendations for the international community on how best to fight corruption, strengthen international cooperation in this area and implement the UN Convention against Corruption.