ASTANA – Kazakh Minister of Foreign Affairs Kairat Abdrakhmanov met with Austrian President Alexander Van der Bellen, and attended the 24th Council of Foreign Ministers of the Organisation for Security and Cooperation in Europe (OSCE) during a Dec. 6-8 visit to Vienna. 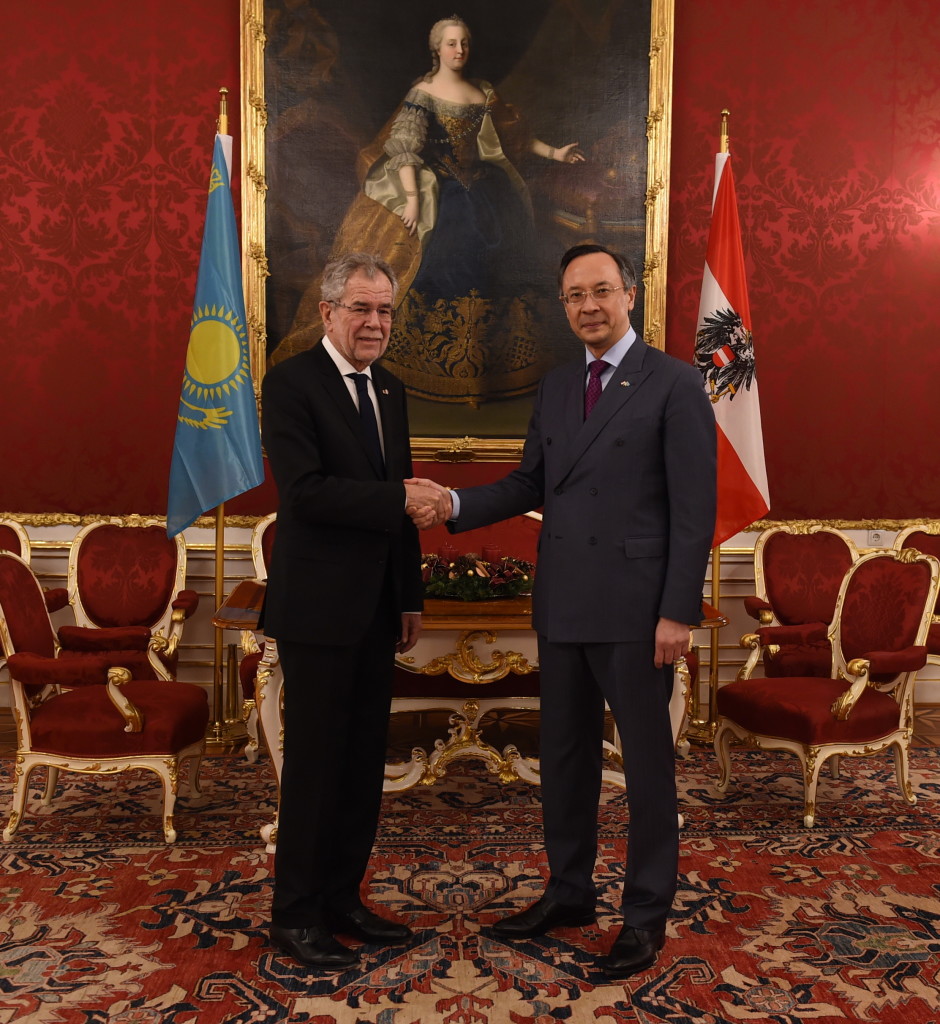 The Austrian President praised Kazakhstan for its holding of EXPO 2017 and Kazakhstan’s efforts to help de-escalate the conflict in Syria and other peacekeeping efforts. He also noted Kazakh President Nursultan Nazarbayev’s leadership in nuclear non-proliferation, according to the Kazakh Ministry of Foreign Affairs.

The two officials also discussed bilateral cooperation within international organisations, including the UN and the OSCE. They also discussed Kazakh – European Union cooperation in the context the Enhanced Partnership and Cooperation Agreement (EPCA). Austria is involved in implementing the EU strategy for Central Asia and seeks to partner with Kazakhstan on transit transport and infrastructure projects.

Abdrakhmanov met with the Kazakh-Austrian society’s leadership, Kazakhstan honorary consuls in Austria and Slovenia and Austrian economic officials and businesspeople. The talks focused on reforms, outlined in President Nazarbayev’s address to the nation “The Third Modernisation of Kazakhstan: Global Competitiveness” and “Rukhani Janghyru” programme. 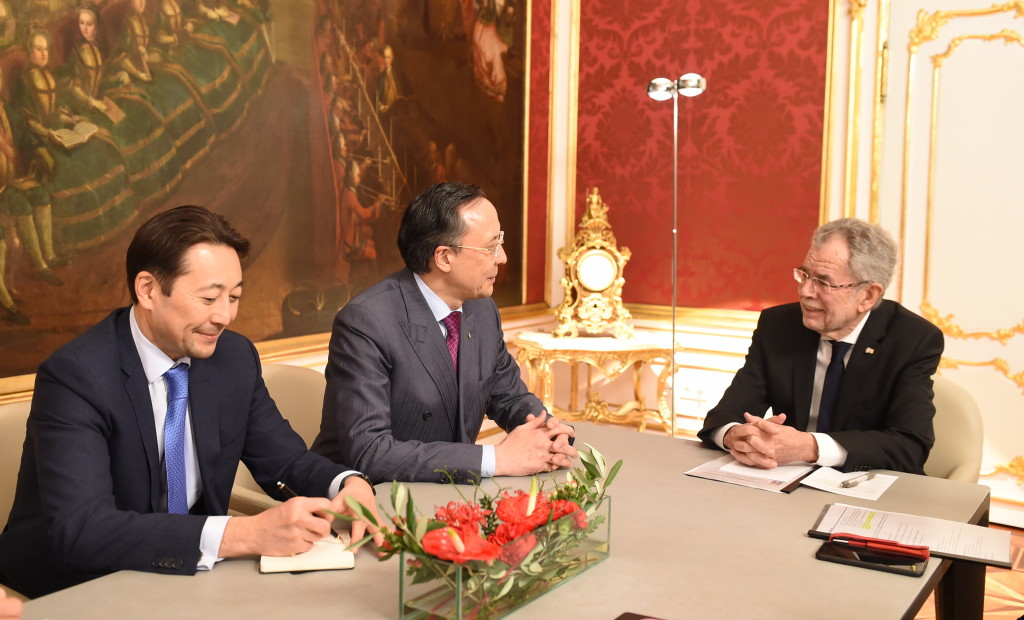 At the Dec. 7-8 24th OSCE Ministerial Council session on the Euro-Atlantic and Eurasian challenges, Abdrakhmanov stressed the importance of the principles of the Astana Declaration of the 2010 OSCE Summit – the only political document the organisation adopted in the 21st century.

In his remarks to colleagues from other 56 OSCE participating states as well as eleven partners, the diplomat pointed out the importance of dialogue and cooperation in conflict prevention and outlined Kazakhstan’s priorities as a non-permanent member of the UN Security Council and mediation efforts in the Eurasian region. He also presented the Kazakh President’s initiatives to create a Global Anti-Terrorist Coalition and the Code of Conduct on Global Action against Terrorism and Extremism and called for steps to strengthen OSCE cooperation with the Conference on Interaction and Confidence Building Measures in Asia, the Shanghai Cooperation Organisation and the Collective Security Treaty Organisation that will be chaired by Kazakhstan in 2018. 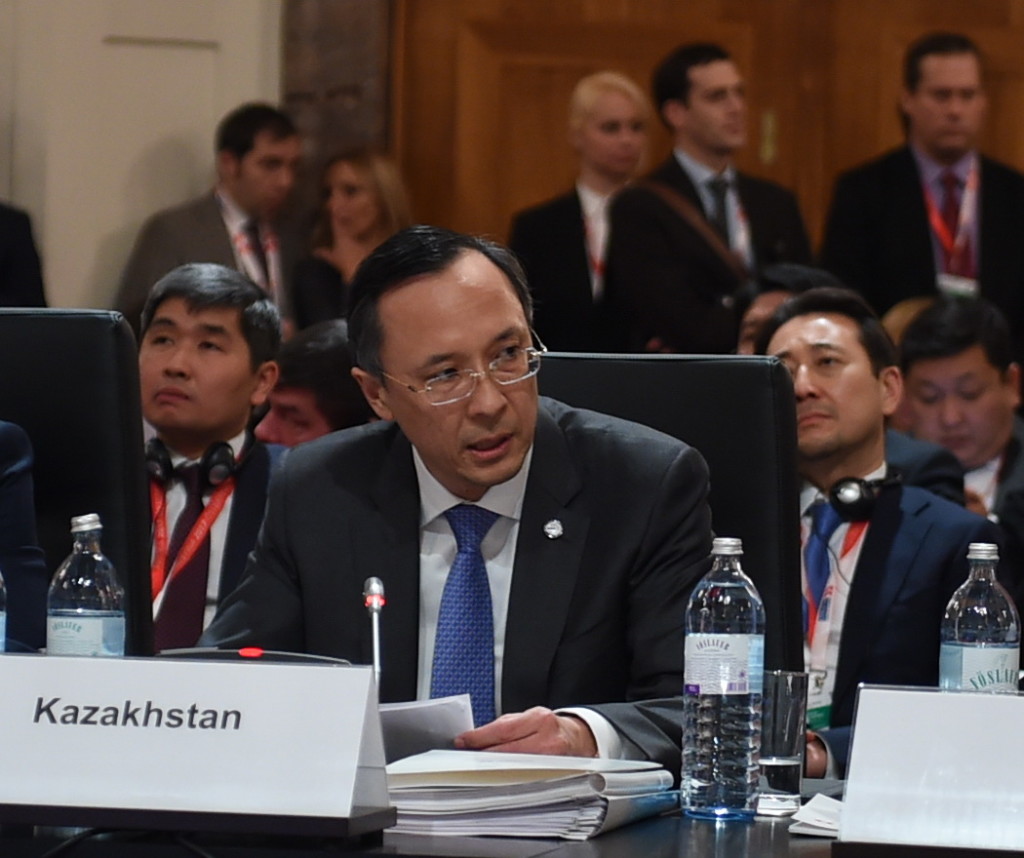 Abdrakhmanov also praised the start of a structured dialogue on military challenges meant to restore confidence in arms control talks within the OSCE region with a view to preventing the growth of military activity and the increases in the concentration of troops and, as a consequence, the danger of military incidents, confirming Kazakhstan’s willingness to actively participate in it.

The OSCE’s economic and ecological dimension should help build consensus, stability and cooperation within the OSCE, he said.

“The OSCE can promote greater compatibility between regional economic and integration processes and, ultimately, lead to the formation of a single economic space from the Atlantic to the Pacific. We hope to continue promoting the benefits of enhanced interaction between integration associations, and in this regard remain committed to the idea of a Greater Eurasia, uniting the Eurasian Economic Union, the Belt and Road Initiative, and the European Union,” he noted.

An initiative from Secretary General Thomas Greminger to create thematic OSCE missions was welcomed by Abdrakhmanov, who proposed using the former EXPO 2017 site to host the thematic OSCE Centre for Interconnectedness and Green Economy in Astana.

“Kazakhstan is of the opinion that the reduction of environmental risks, resource efficiency and alternative energy uses go hand in hand with good governance, encourage the rule of law, economic progress and the strengthening of cooperation in the OSCE human dimension,” he said.

“I strongly believe that we should build upon this positive momentum in the OSCE to form a healthy political environment as a strong foundation for conflict-free development and the attainment of the vision enshrined in the 2010 Astana Declaration. That declaration itself as the one and only document of such scale in the 21st Century proves that this mission is possible. But we need trust, transparency, tolerance and respect for traditions,” Abdrakhmanov concluded evoking the famous 4 Ts slogan of Kazakhstan’s 2010 OSCE chairmanship.

On the sidelines of the Vienna ministerial, the Kazakh minister attended an informal meeting of CSTO foreign ministers who discussed the OSCE Agenda and CSTO-OSCE cooperation. Kazakhstan proposed to focus on countering terrorism, cybersecurity and combating illicit drug trafficking as possible areas for cooperation.

Abdrakhmanov also discussed bilateral and multilateral cooperation with the heads of delegations from Austria, Italy, Macedonia, Mongolia, the Netherlands, Estonia and the European Union.

Talking to the European partners, the Kazakh minister stressed the need to strengthen contacts between citizens of Kazakhstan and European countries, including by simplifying the visa regime.

The spectrum of Kazakh-Austrian relations was also discussed during the meeting with the OSCE Chair-in-Office – Austria’s Minister for Europe, Integration and Foreign Affairs Sebastian Kurz. Special attention was paid to the development of economic interaction with an emphasis on trade diversification, as well as legal cooperation, including the establishment of direct contacts between law enforcement agencies, the signing of bilateral treaties and the accession of Kazakhstan to the legal instruments of the Council of Europe.

Abdrakhmanov also congratulated Kurz for the victory of his Austrian People’s Party at the parliamentary elections in October, wished him success in forming the new government and invited him to visit Kazakhstan.

A detailed conversation on global issues also took place with Secretary General of European External Action Service Helga Schmid. The diplomats considered the implementation of the Joint Comprehensive Plan of Action on the Iranian nuclear programme, the situation in the Middle East and Afghanistan.

While in Vienna, Abdrakhmanov also met with Lassina Zerbo, executive secretary of the preparatory commission of the Comprehensive Nuclear Test Ban Treaty Organisation (CTBTO) to discuss Kazakhstan’s on-going cooperation with CTBTO in reaching its goal of ensuring the treaty’s early entry into force.