By Dana Omirgazy in Business on 21 December 2017

ASTANA – Kazakhstan’s national Employment 2020 Programme helped 413,000 citizens get a job over the last 12 months. Of those, 279,000 were permanently employed, Kazakh Minister of Labour and Social Protection Tamara Duissenova said during a Dec. 20 government meeting. 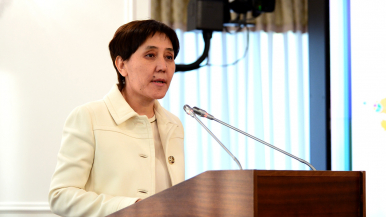 The programme includes 527,000 participants so far. More than 50 percent are inhabitants of rural areas. According to the minister, the main indicators of the programme have been achieved.

“Under the first direction, 90,000 people were trained to meet the needs of regional labour markets. Of them, 21,000 people are unemployed youth; the remaining 69,000 are unemployed and self-employed. Short-term training courses were completed by 43,500 people,” Duissenova said.

Almost 15,000 people underwent training to support entrepreneurial initiatives under the Bastau business programme. Approximately 8,200 attendees protected their business projects and over 3,000 received loans. Next year, the government hopes to double the number of trainees among unemployed and self-employed citizens.

The third direction of the programme provides targeted support in employment of vulnerable categories of citizens and increased mobility of labour resources.

“This year, approximately 134,000 people have been introduced to social work places, youth practice and public works,” the minister noted.

The programme gives special attention to the increase of citizens’ labour mobility. Duissenova reiterated that more than 2,000 families expressed a desire for voluntary resettlement in the northern regions under the interregional job fairs.

“Given allocated funds, 381 families or 1,479 people have voluntarily moved from the southern to the northern regions under the programme. Next year, it is planned to increase the regional quota of resettlement by five times, that is, to resettle up to 1,700 families or about 7,000 people,” Duissenova reported.

The minister submitted for the government’s consideration changes to the programme to more effectively encourage the voluntary resettlement of citizens, support entrepreneurial initiatives of citizens and improve the education system.

In addition, Minister of National Economy Timur Suleimenov, Minister of Education Yerlan Sagadiyev and First Vice Minister of Agriculture Kairat Aituganov reported on the implementation of the programme for the Development of Productive Employment and Mass Entrepreneurship.