We have very friendly ties and people love each other, says Georgian ambassador

ASTANA – Georgian Ambassador to Kazakhstan Zurab Abashidze has praised the countries’ friendly ties and expressed a commitment to bringing the partnership to a new level. 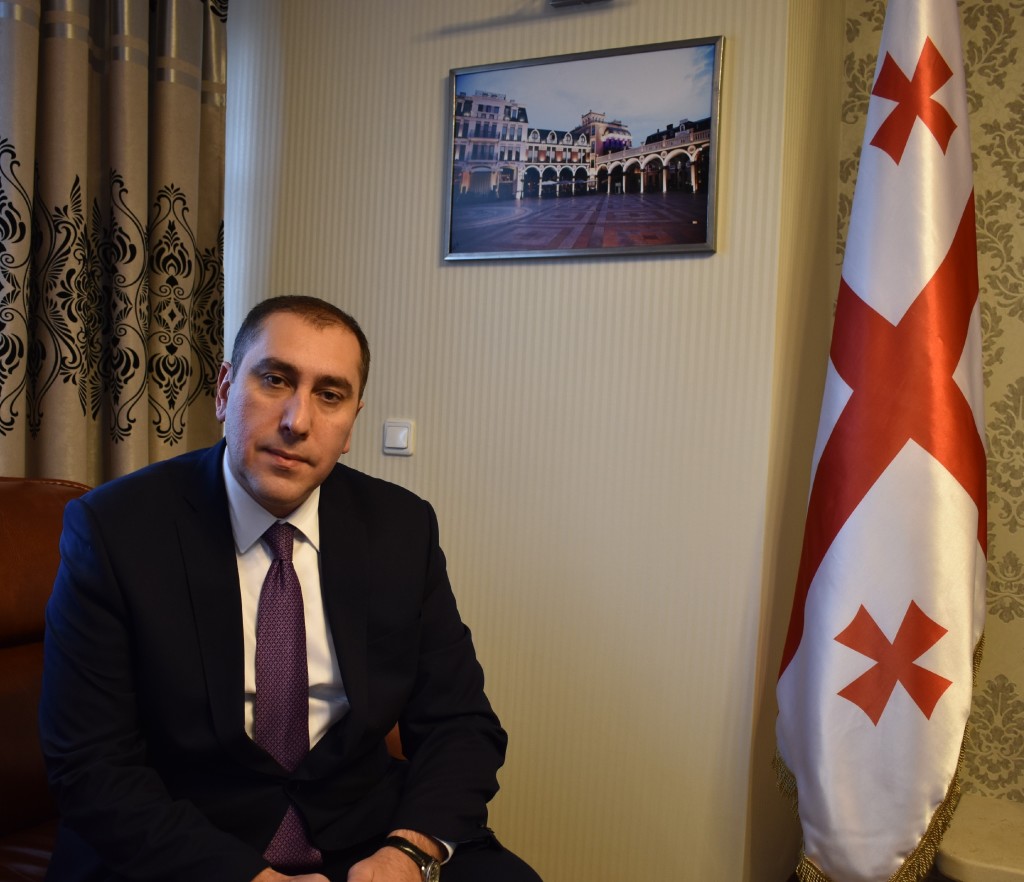 Abashidze arrived in the capital in March on his initial diplomatic mission as an ambassador, he recalled in a recent interview for this story.

“It was the first time I arrived in Astana and my first time in Central Asia. I am very excited. I am always joking that this date marks the launch of the visa-free regime between Georgia and the European Union and while others went to Europe, I went to Central Asia,” he said.

“I am lucky that I am the ambassador of Georgia, especially to such very nice and beautiful country as Kazakhstan,” he added.

Before taking the post, Abashidze worked in the Georgian government, and has served as a deputy speaker of its parliament with responsibilities in foreign relations issues.

Eight months into his appointment have seen several milestones in Kazakh-Georgian cooperation, including Georgian President Giorgi Margvelashvili’s visit to the capital in June and the country’s participation in EXPO 2017.

“The president arrived the day after [the opening of the expo]. We had a very busy schedule. We had our first national day on the expo stage,” he said.

In addition to meeting with Kazakh President Nursultan Nazarbayev, the delegation engaged with Prime Minister Bakytzhan Sagintayev as well as Senate and Majilis speakers.

Georgian debt to Kazakhstan was among the issues raised. The country experienced economic problems in the 1990s after gaining its independence and took a $27 million loan from Kazakhstan to recover its economy, said Abashidze. The sides agreed Georgia would start repaying the loan in September.

“I have to thank Kazakhstan for its support of Georgia, its sovereignty and territorial integrity. We know what it means – this support of Kazakhstan to Georgia,” he noted.

The work to strengthen the current partnerships and set up new ones is continuing, he added, as Georgian Foreign Minister Mikheil Janelidze is expected to visit Kazakhstan in early 2018.

Nazarbayev made his first official visit to Tbilisi in 2005 and the Georgian government has issued invitations for his return.

“We have to work on the visit of President of Kazakhstan Nursultan Nazarbayev to Georgia. Not only me, but our president, prime minister and high level officials are expecting the visit, because Georgian people love and respect him,” noted Abashidze. “The time has come.”

He noted Kazakhstan has been one of the main investors in the Georgian economy, with direct investments last year of $435 million. The Kazakh money backed 160 ventures launched in the country in recent years, he added.

“What we can offer Kazakhstan from the investment point of view is that we are closer to the EU (European Union) than Eurasian countries. We are not part of the Commonwealth of Independent States (CIS),” he said.

The major investment projects include the Rixos Hotel in Borjomi. Since its unveiling in 2015, it has become one of Georgia’s most popular holiday destinations.

“It was built by Kazakh investors. It is one of the biggest projects and very successful in Borjomi, one of the most popular regions in Georgia where the mineral water comes from. It is very famous,” he added.

Batumi port, which belongs to Kazakhstan’s national oil and gas company KazMunayGas and its subsidiary KazTransOil, is an important part of Kazakh-Georgian cooperation. The 826-kilometre Baku-Tbilisi-Kars -railway route recently opened with a ceremony in Baku, which, according to Abashidze, is the “project of the century.”

Trade offers greater opportunities for both sides, with the trade turnover totalling $62 million in 2016 and $67.5 million between January-October this year. Abashidze, however, believes the indicators could be higher.

“It is not very high. We have to increase the figures and work very hard. The governments, business community and the Kazakh Invest company are working very well in this area,” he said.

Georgian exports included mineral water and wine and, according to Abashidze, Kazakhstan is among the five biggest consumers of Georgian wine along with China, Poland, Russia and Ukraine. The nation imports Kazakh oil products, meat, dairy and wheat, he said, stressing the excellence of the latter.

Georgia’s success in public administration is also among the important areas of cooperation. In recent years, the nation completed successful reforms in the field, eventually managing to tackle corruption and decrease crime rates, serving as one of the best examples in the post-Soviet space.

“Reforming the country is the brand for Georgia, [as it relates to] how we defeated corruption in the government and police. Police do not take any bribes and the criminal situation is very low,” said Abashidze.

“Georgian experts are deeply involved in consulting Kazakh officials, government, judiciary, prosecutor’s office and other institutions. We are happy and glad to have such close relations and that Kazakhstan acknowledged Georgia’s achievements. This may be our investment in Kazakhstan,” he added.

The ambassador praised the friendly ties between people in both nations.

“We are very friendly countries and people love each other,” he said.

Georgia is among the most popular holiday destinations for Kazakhs due to the visa-free regime, relatively cheaper prices and direct flights. Its national cuisine is also an attraction.

“I was counting this summer how many direct flights we have from Kazakhstan to Georgia and there were 18 per week. Every day from Almaty to Tbilisi and four times from Astana to Tbilisi and I am not mentioning other cities, such as Aktau and Shymkent,” said Abashidze, suggesting other Central Asian countries should use Kazakhstan as an example.

“Tourism is the most popular way to communicate between Kazakh and Georgian people and I was very happy to hear that people here love Georgia. We used to live in a common country, the USSR, and people are mentally very close and we do not have any boundaries in terms of language, because we both speak Russian,” he added.

Abashidze believes in a bright future for the Kazakh capital.

“Astana will become the financial centre of Central Asia and a hub for the entire region. The city is so nice with newly constructed buildings; this is hard work. I wish success to your country and people. I love your country and love your people,” he said.