By Aigerim Seisembayeva in International on 2 November 2017

ASTANA – King Abdullah II of Jordan was awarded the Nazarbayev Prize for a Nuclear-Weapons-Free World and Global Security during his Nov. 1 official visit to Kazakhstan. The Jordanian monarch was decorated for his contribution to “regional stability, global security and steadfast stance against war and the proliferation of weapons of mass destruction.” 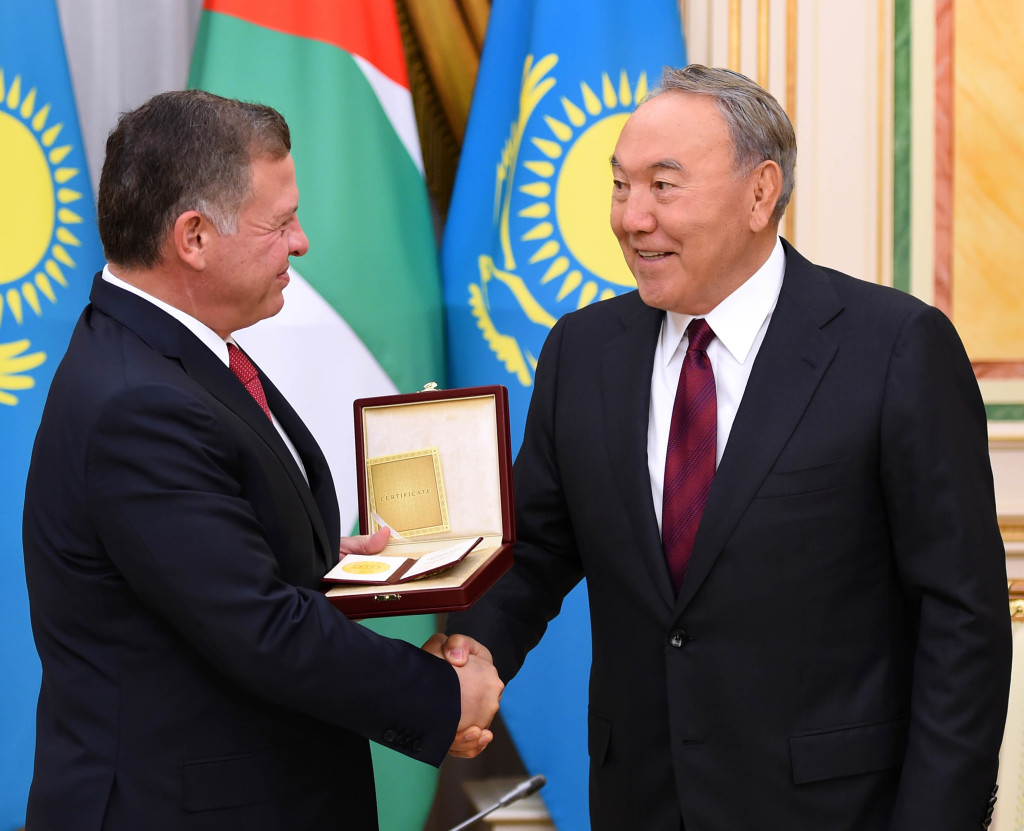 “This award is in recognition of your contributions and manifestation of hope that as conflicts rage you would continue with a peacemaking role, which brings people closer,” said Kazakh President Nursultan Nazarbayev.

He specifically highlighted Jordan’s acceptance of up to 1.3 million refugees since the Syrian crisis began more than six years ago, as well as Amman’s involvement in the Astana Process peace talks on Syria as an observer. Jordan’s contribution to peace process between Israel and Palestine was also noted.

King Abdullah thanked the Kazakh President for the invitation, the warm welcome rendered by the Kazakh hosts and expressed gratitude for the award. 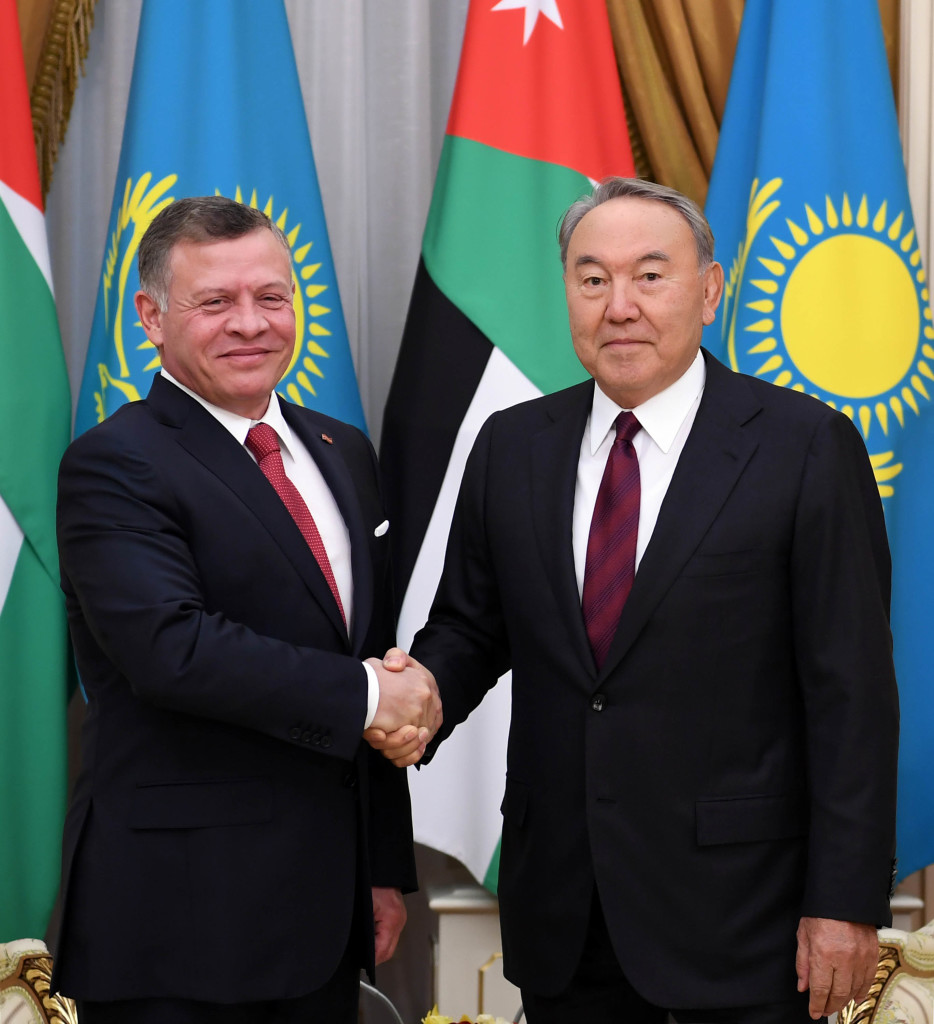 He emphasised the trusting nature of the relations between the two countries and highlighted the important role of Nursultan Nazarbayev in the peaceful settlement of international conflicts.

“We value what you do to make this world a better and safer place. Your leadership is important for all of us,” said the king.

He stressed that “this award is for the entire people of Jordan.” His office is reported to have added that the prize money would go to support excelling Jordanian students in public schools.

The leaders of the two countries also tackled international issues, including the war in Syria and the Astana Process, the situation in Iraq, the diplomatic crisis around Qatar, as well as the fight against terrorism and joint efforts to promote religious tolerance and nuclear non-proliferation.

The Jordanian leader visited Kazakhstan the day after the seventh high-level international meeting on Syria concluded in Astana. Jordan participated in the talks as an observer. Nazarbayev stated that the Astana Process helped diminish the level of violence in Syria significantly, as the local population have a chance to return to peaceful life. 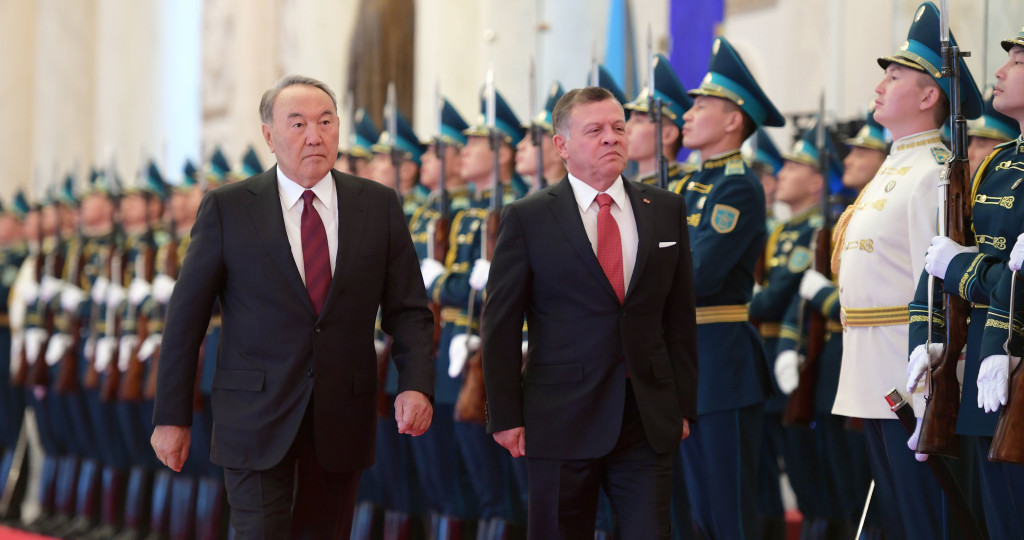 The Kazakh President and the Jordanian King agreed to continue developing bilateral ties and cooperating on efforts for international peace.

At a briefing that followed the bilateral meeting, Nazarbayev noted February 2018 will mark the 25th anniversary of Kazakh-Jordanian relations.

He also thanked the Jordanian side for their active participation in the EXPO 2017 international specialised exhibition in Astana and the first Summit on Science and Technologies of the Organisation of Islamic Cooperation.

King Abdullah confirmed Jordan’s willingness to continue the close cooperation with Kazakhstan and thanked Kazakhstan and its leader for its contribution to the international community.

“My dear brother, you have brought global vision to today’s most pressing international concerns. Today, Kazakhstan is a champion of global co-existence and cooperation,” he said.

The meeting resulted in the signing of bilateral agreements, including those on extradition of persons, on the transfer of convicted persons, on legal assistance in criminal matters, on cooperation in combating terrorism, organised crime, illicit trafficking in narcotic drugs, psychotropic substances, their precursors and other types of crimes.

The Nazarbayev Prize for a Nuclear-Weapons-Free World and Global Security was established in 2016. Its objective is to urge international actors to pursue more vigorous efforts to rid the world of nuclear weapons.