ASTANA – Kazakh President Nursultan Nazarbayev addressed the Astana Club, a neutral platform to debate public issues based on Chatham House rules, during its Nov. 13 third annual meeting.  He talked about global challenges and threats such as growing terrorism, military issues, economic situation, migration, as well poverty and lack of water and food. 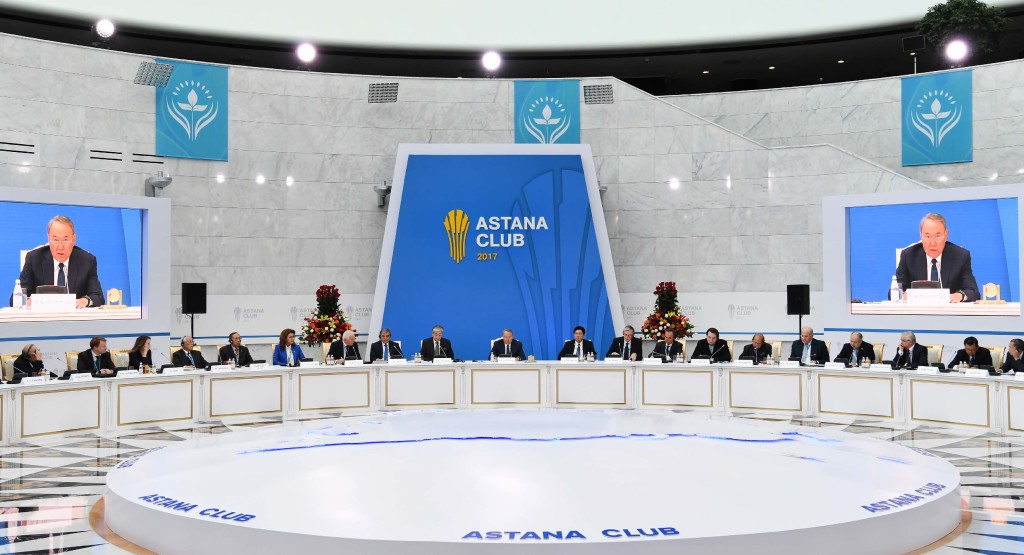 “We are trying to bring to the world something that it has been lacking so much recently – unification, cohesion and tolerance for solving global problems. Kazakhstan’s diplomacy is focused on a philosophy of dialogue, compromise and mutually beneficial partnership. This can be seen in the examples of mediation efforts on Syria, anti-nuclear initiatives, the contribution to the dialogue between cultures, the development of socio-economic agendas,” the President said.

One of the main issues Nazarbayev addressed was international terrorism.

“The building of a new architecture for global development takes place in the context of a deepening geopolitical, geo-economic and geo-ideological fault along the East-West line. Political repression, poverty, low level of education and health are fuelling the international terrorism and extremism,” he said, adding that the existing systems of regional and international security do not meet dynamics of the pace of developments or offer enough sustainable solutions to old and new issues.

“There is a formation of a new trade world order by forming large blocks around competing economic centres. This may lead to a reduction in the role of the WTO, an increase in protectionism. The threat to international trade and fair competition comes from ‘sanctions wars,’ which under the pretext of political pressure pursue economic goals and vice versa,” he said.

The second set of major global issues includes the growth of militaristic sentiments, the development of the arms race and the threat of nuclear weapons as well as the increase in global tensions generally.

“For many years and decades, military operations in the Middle East and Africa remain in active phase. The situations in Afghanistan, Iraq, Ukraine, Nagorno-Karabakh are in a limbo. The growth in global tension increases the demand for armaments. Military spending once again rose last year and amounted to US$1.7 trillion or 2.2 percent of world’s GDP. The United States increased its military spending to US$611 billion, China to US$215 billion, Russia to US$69 billion, India to US$56 billion, and this is a large part of the total national income of these countries,” said Nazarbayev.

According to him, the increase in military spending not only poses a threat to security and peace, but is also ineffective distraction of economic and human resources from real needs. He noted that international terrorism has significantly spread over recent years and the world is on the edge of the world war.

“Today, any place in the world can become the object of destructive strikes. Since the beginning of the third millennium, the number of terrorist attacks, as well as the number of deaths, has increased tenfold; terrorist attacks have occurred in 104 countries, which are more than half of the world. By geography and scale, we are, conditionally, in the state of the third world war – a war against terror. And the attacks are shifting from developing to developed countries. According to Global Terrorism Index, 2015 was the worst year in terms of terrorism for OECD countries. The number of attacks was 731. At the same time, terrorist attacks occurred in 21 of 34 OECD countries. Pseudo-Islamic sects expand the area of ​​their influence, aggressively penetrating the territories of many states. Despite the contradiction between the world and regional powers, it was possible to coordinate actions in the fight against the Islamic State in the Middle East. However, it must be understood that defeated militants will begin to revive cells in other territories, and this is a serious challenge for the whole of Eurasia,” he stated. 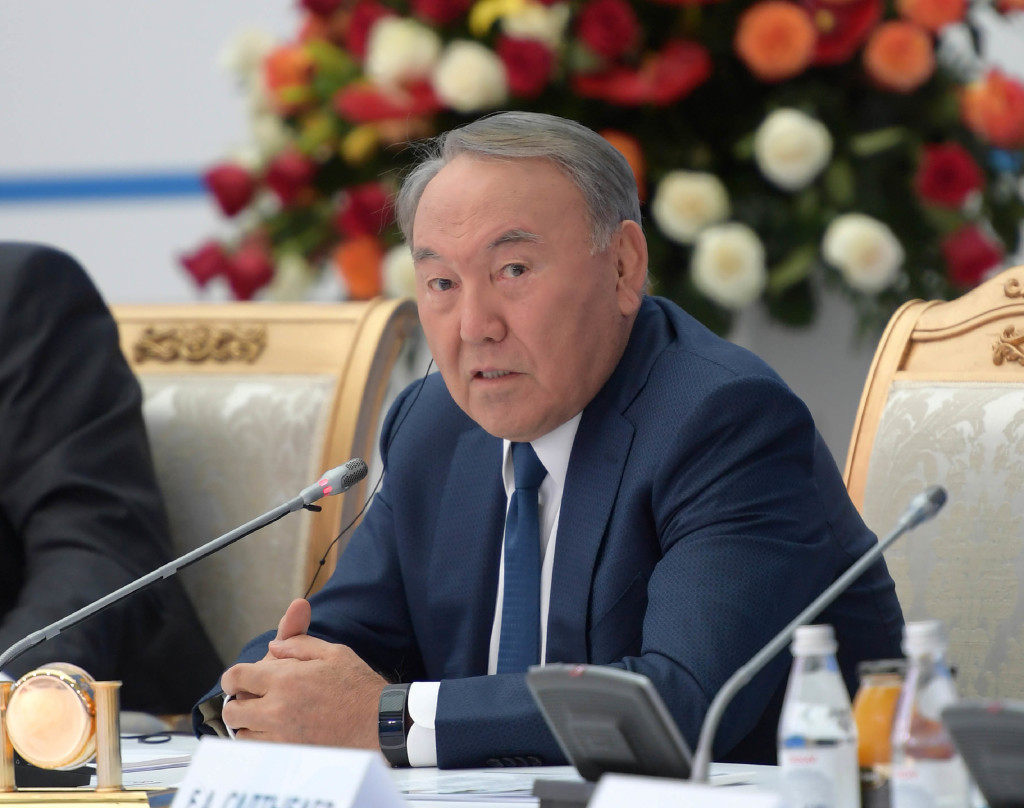 As the fourth issue, the Kazakh leader highlighted uncontrolled global migration, noting that over the past 25 years the number of international migrants has doubled and now exceeds 250 million people. At the same time, limited food resources are particularly relevant in the context of global population.

“Migration processes lead to a conceptual rethinking: there has not been such a significant demographic imbalance in the history of mankind. In the developed countries the population is one billion people, in developing countries it is 6.5 billion,” said Nazarbayev.

People move somewhere else mostly because of poverty and wars, said the President. This leads to social tensions, crime and unemployment.

“The flows of migrants from the Middle East and Africa took Europe by surprise. They provoked socio-political crises, as well as national-populist and, frankly, xenophobic sentiments. At the same time, the expenditures for refugees in countries such as Lebanon, Jordan and Turkey costs between 1.5 to 3 percent of the GDP of these countries,” he said.

The problem of uncontrolled flow of people is often linked with the issue of life support resources and their inevitable shortage. The struggle for fresh water becomes a reason for interstate contradictions, like in a situation between India and Pakistan, said Nazarbayev.

“With the growth of population on the planet, the food crisis in some regions of the world is inevitable. There is a decline in arable land. The fertility of soils is declining. According to the calculations of experts, in the next 40 years it is necessary to increase the acreage for grain at least twice. It is important to identify the agriculture of the Eurasian countries, including Kazakhstan as a major producer of food products,” he added.

According to him, to solve those issues, Eurasia is able to offer a unifying agenda in the field of security, economic growth and dialogue. The implementation of the Belt and Road Initiative, the Eurasian Economic Union, the Shanghai Cooperation Organisation, Kazakhstan’s own Nurly Zhol infrastructure programme and other projects makes it possible to create a fundamentally new geo-economic configuration in the Eurasian continent, he emphasised. A broader conjugation with the European Union and ASEAN has a great potential for the development of Eurasia, as well as the whole world, he added.

“I think that the development of mankind is our future. It is the subcontinent of Europe and Asia that, in cooperation among themselves, trading in a free space, can count on development. For a long time, our region’s states were on the periphery of international cooperation because of the distance from the open seas. Not so long ago in 2011, Hewlett-Packard Company set a goal to establish direct rail supplies between China and Europe. This idea then looked like a real adventure. Today there are about 40 transcontinental routes. … Over the past two years, direct railroad deliveries from China to Afghanistan, Iran and the United Kingdom were made for the first time. All this allows us to re-position the Eurasian region in a global context. I am convinced that the future rests on the broad integration based on the principles of equality, mutual respect and following the principles of international law,” he said.

Kazakhstan, having regained its independence 26 years ago, strives to be useful for the whole world and to serve peace and cooperation and seeks mutual trust in Eurasia, he ended.

Astana Club as a dialogue platform

This year, the Astana Club meeting has gathered more than 60 participants from 27 countries, including politicians, diplomats and researchers from leading think tanks.

“In my speech I noted how Kazakhstan has become a centre of independence, prosperity and economic development, and I think President Nazarbayev serves not only his country, but the whole region of Eurasia. … The peace-making initiatives of the country made this region, especially Kazakhstan, a centre of stability. Astana has become a platform for Syrian talks; Astana unites many international organisations around itself. And we feel very proud for a brotherly nation, which has become a platform for making important international decisions,” Gül said at a media briefing afterwards.

The central theme of this year’s Astana Club meeting was Greater Eurasia-2027: Confrontation or Partnership and was meant to seek strategic solutions to global policy issues.

“Astana has secured the role of a global neutral platform, where strategic dialogues take place at the highest political level. It is this factor that has drawn genuine interest and attracted all the new participants of our meetings,” Yerzhan Saltybaev, director of Institute of World Economics and Politics which organises the Astana Club, said prior to the event.

According to participants, the club has provided a way to share opinions on today’s hottest topics.

“There are many opportunities here to exchange perspectives on some of the most important issues of the day, including assessment of the situation in the world from President Nazarbayev, who seems to be very well informed, and wide range of issues from the Rohingya crisis in the South East Asia to the migration crisis in Europe, opportunity to hear from some prominent former statesmen about their take on the situation,” said Senior Fellow and Director of Russia and Eurasia Programme at the Carnegie Endowment for International Peace Eugene Rumer in a comment.