By Aigerim Seisembayeva in International on 14 November 2017 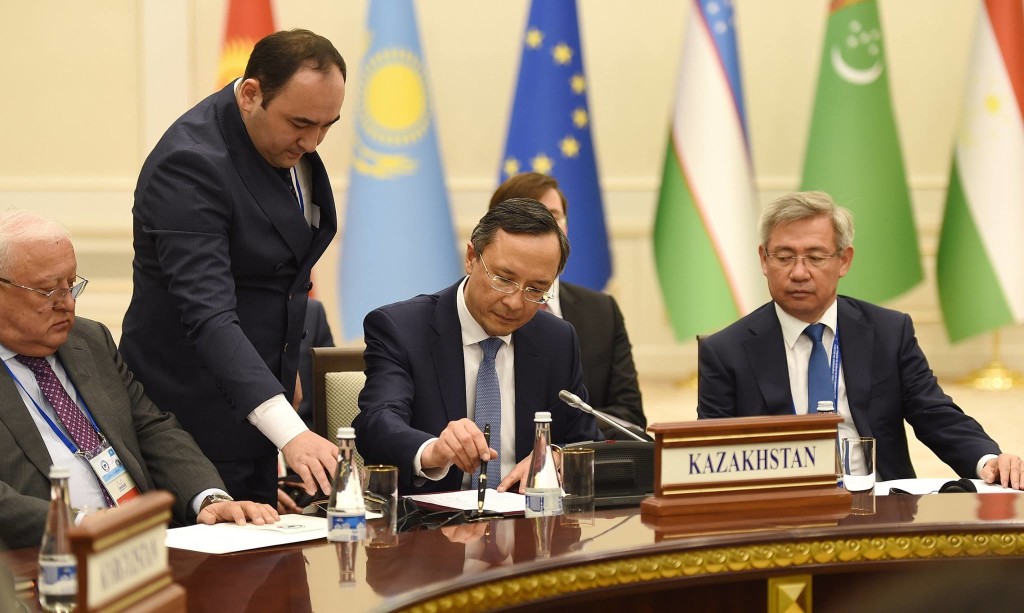 Foreign ministers from Kazakhstan, Kyrgyzstan, Tajikistan, Turkmenistan and Uzbekistan, the European Union’s (EU) High Representative for Foreign Affairs and Security Policy and Vice-President of the European Commission Federica Mogherini and the European Commissioner for International Cooperation and Development Neven Mimica adopted the communiqué, EU and Central Asia: Working for a Safer and More Prosperous Future Together.

“We are, as the European Union, and we will remain the first development partner of the region. But we see Central Asia more and more not as a recipient of aid but as an economic partner, with a market of 70 million people, that, especially if reforms are undertaken successfully, will become an attractive area for investments, including from Europe. We believe that we are facing challenges but that there are a lot of opportunities that we can make the most out of if we cooperate together,” said Mogherini following the meeting.

Participants also discussed ways to optimise Central Asia’s economic, transit and transport potential and to better manage cross-border issues, such as water and energy use as well as environmental protection.

Officials also discussed the security situation in and around Central Asia, including Afghanistan, and the security challenges facing the European Union. Participants said in the joint communiqué they welcome the support provided to Afghanistan by the EU and Central Asian countries and called for continued joint efforts to help that country.

They also stressed the importance of strengthening good governance, including democracy, human rights protections, fundamental freedoms and the rule of law in combating extremism, terrorism and drug trafficking and responding to financial and political challenges. The communiqué also said the Dec. 7 meeting of EU and Central Asian Ministers of Justice in Brussels would intensify discussion on the Rule of Law Initiative.

“Never before have we had such an intense, positive and constructive EU-Central Asia cooperation. I would say that we are at the top of our historical experience of cooperation, but we want to use this not as a target point, but as a starting point,” Mogherini said.

In this regard, the five Central Asian foreign ministers welcomed the decision to adopt the new EU Central Asia Strategy by the end of 2019 that will lay the foundation for further cooperation.

The next EU-Central Asia Foreign Ministers’ meeting will be in Brussels in 2018.