OECD Eurasia Week in Almaty, first in region, focuses on openness and diversification

ASTANA – OECD Eurasia Week under the theme Openness for Shared Prosperity took place in Almaty Oct. 23-25 for the first time outside the organisation’s headquarters in Paris. The forum gathered high-level officials from OECD, its member states and partner countries in the Eurasian region, including OECD Secretary-General Angel Gurria and Kazakh Prime Minister Bakytzhan Sagintayev, to discuss ways to promote economic openness and foster policy dialogue in a multilateral framework.

“We see the growing interest from the region in the OECD instruments and multilateral cooperation,” he said.

The decision to organise Eurasia Week in Almaty, made last year in Paris, reveals Kazakhstan’s increasingly dynamic involvement in the organisation and its “thorough and fruitful cooperation,” he added.

The partnership between Kazakhstan and the organisation embarked on a new phase in 2015 when the nation became one of the first three countries to implement the OECD Country Programme, which offers partners full involvement with the organisation’s best expertise and policy network in carrying out structural reforms to promote prosperity and inclusive and sustainable economic growth. OECD prolonged the programme this year until the end of 2018. 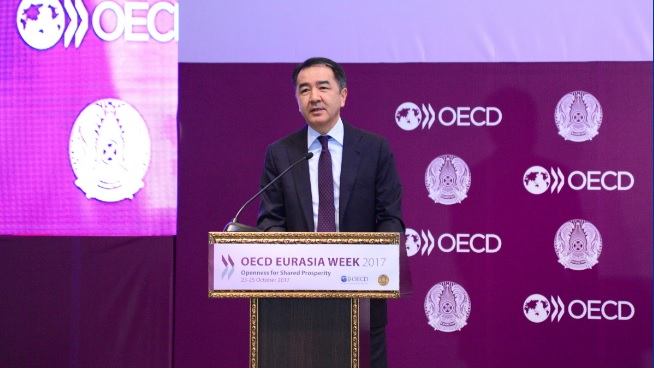 Kazakhstan’s involvement in the programme demonstrates the organisation’s support of the nation’s crucial objective of entering the world’s 30 most developed countries by 2050, noted Sagintayev, adding the standards and development level of OECD member states serve as a practical guideline for Kazakhstan in its economic development.

“The OECD recommendations help us conduct a structural reform agenda in a wide range of issues, including public administration, small and medium-sized entrepreneurship policies and green growth. Kazakhstan is ready to contribute to promoting best practices and share its experience of cooperation with the OECD and the Eurasian countries,” he said.

This year’s theme is of particular importance for the region, noted Gurria, as it contributes to diversification, a key goal for the Eurasian countries that heavily rely on oil and gas resources.

Kazakhstan’s continuing dependence on oil and gas and metals is one of the main challenges for its economy as well as an impediment for its diversification, said Kazakh Minister of National Economy Timur Suleimenov at a ministerial panel on where participants from Central Asia and Eastern Europe discussed key challenges for their economies.

In 2009, they accounted for 19.7 percent of Kazakhstan’s GDP, according to the minister, and after many years of concerted efforts under various state programmes, their share now stands at 12.7 percent of GDP.

Other factors affecting Kazakhstan’s economic development, according to Suleimenov, include rather basic, but inescapable factors – climate, geography and expenses.

Comparing Kazakhstan to the Netherlands, which has a similar size of the population, yet 65 times smaller than Kazakhstan, Suleimenov explained the need to invest much more in the development of infrastructure.

“Infrastructure and transportation costs are a lot more in our economic structure. We have to dig deep, heat up more, and transport further. And that impacts our interaction with our neighbours,” he said.

Suleimenov noted, however, that Kazakhstan has a consistent vision of how to overcome those challenges reflected in the nation’s economic programmes such as Strategy 2025.

“We have an even longer term plan in Strategy 2050. All of these strategies talk about diversification,” he said.

Openness not a goal in itself

Openness is not a goal in itself, added Gurria, and the Kazakh government’s efforts affirm that.

“It needs to be accompanied with the right structural and social flanking policies to promote better opportunities and enhanced wellbeing for all,” he said.

“Openness is worth preserving: it can bring greater prosperity, innovation and diversity. The OECD is committed to working with Eurasia and our partners around the globe to develop the analysis, policies and the will to build a more open, transparent and fair global economy. The region is ready and so are we,” noted Gurria.

In his turn, Uzbekistan Deputy Prime Minister Nodir Otajonov stressed the importance of the forum’s theme for all countries.

“Openness for shared prosperity, the theme of the first Eurasia Week held in the region, is relevant to all of us,” he said. “Uzbekistan is taking radical measures to ensure steady economic growth, reform public administration and increase institutional attractiveness.”

Economic openness is equally critical for Tajikistan, said the country’s Deputy Prime Minister Azim Ibrohim, adding there are still many challenges, including the economy’s huge dependence on remittances.

“We have developed a comprehensive set of measures to support businesses,” he noted. “We are welcoming upcoming cooperation with the OECD and neighbouring countries.”

Deputy Managing Director of the European External Action Service Luc Devigne emphasised the importance of the region to the European Union in his remarks.

“Countries to the East of EU are very important for us,” said Devigne, highlighting the EU’s commitment to investing in long-term stabilising partnership with the region.

He also pointed out a significant potential in the development of cooperation between the Union and Kazakhstan. “The EU is the first trading partner and the first investor in Kazakhstan and we are very happy that two years ago we signed the Enhanced Partnership and Cooperation Agreement (EPCA) and I am sure it will strengthen our ties further,” noted Devigne.

The EU is equally the largest foreign donor and the largest contributor to development assistance in the region, especially in Kyrgyzstan and Tajikistan, he said, and maintains its commitment to supporting political and economic reconstruction efforts in Afghanistan.

“I believe it would be impossible to ensure stable development of Central Asia without Afghanistan,” added Devigne.

He assured the countries in the region of the European Union’s continued support.

“I know the geopolitical environment is challenging, but it is still possible to see stars from the bottom of a well when the sun is shining,” said Devigne, referring to the quote from Robert Byron’s The Road to Oxiana about the poet’s account of his travels in Persia and Afghanistan.