By Staff Report in International on 20 October 2017 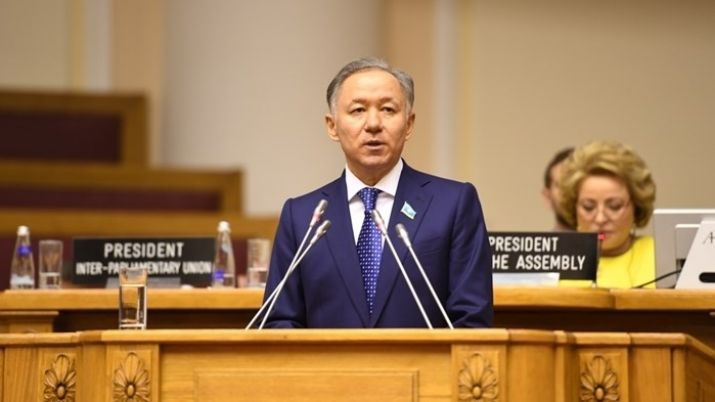 Nigmatulin reviewed Kazakhstan’s proposals and Nazarbayev’s efforts in strengthening regional and global security for the 137th Assembly of the Inter-Parliamentary Union, which drew parliamentarians from more than 160 countries to Tauride Palace in St. Petersburg to unite their efforts to promote peaceful dialogue.

“Back in 2015, President of Kazakhstan Nursultan Nazarbayev, speaking at the 70th session of the UN General Assembly in New York, put forward a number of initiatives to counter international terrorism aimed at creating a Global Anti-Terrorist Coalition under the auspices of the United Nations. Today, from this high rostrum, we appeal to fellow parliamentarians from the member states of the Inter-Parliamentary Union to support the initiative of the President of Kazakhstan to develop and adopt ‘The Code of Conduct on the Achievement of a World Free of Terrorism’ within the framework of the United Nations. I’m sure it will make a significant contribution to the global parliamentary community in the fight against one of the most serious threats of the 21st century,” Nigmatulin said.

The speaker also explained the unique model of interethnic and inter-confessional dialogue that Kazakhstan has formed and is successfully developing. Among its basic principles, he noted, are the constitutional and legal provision of equal opportunities for all citizens of the country in the realisation of their religious and cultural interests.

A purposeful state policy on the development of the culture and languages of the ethnic groups of Kazakhstan, the formation of effective institutions for interethnic accord and a consistent practice of interfaith dialogue were also noted.

Discussing the Assembly of the People of Kazakhstan as a unique institution for supporting harmonious interethnic relations, Nigmatulin noted the commendation of the assembly by the UN, UNESCO and the Organisation for Security and Cooperation in Europe (OSCE).

“The experience of the Assembly of the People of Kazakhstan could be of interest to the world community as an effective model for institutionalising interethnic dialogue for multicultural societies,” Nigmatulin said.

Nigmatulin met with Speaker of the Great National Assembly of Turkey Ismail Kahraman to talk about issues of strengthening inter-parliamentary cooperation. They paid special attention to interaction within the framework of the Parliamentary Assembly of Turkic-speaking States and the relevance of parliamentary diplomacy in the face of modern challenges.