By Aigerim Seisembayeva in International on 13 October 2017

During the CIS summit, the heads of state and government discussed strengthening cooperation as well as deepening trade and economic ties among member states.

Tajikistan presented its agenda for its chairpersonship of the organisation and Turkmenistan shared ideas to develop the organisation. The results of the work within the CIS Interparliamentary Assembly were also presented.

President Nazarbayev stressed the CIS’ role in developing trade and economic relations among the member states.

“Free trade in services in the CIS will open new opportunities for our businesses and bring our countries’ trade and economic cooperation to a new level. I propose to instruct the Council of Heads of Government and the Executive Committee to intensify work on the draft Agreement on Free Trade in Services and to adopt it in the near future,” Nazarbayev said.

The CIS heads of state signed documents on combating corruption and legalisation of proceeds from crime. They also considered humanitarian measures to expand ties in culture, education, science and tourism. They also adopted a statement supporting family and traditional family values. 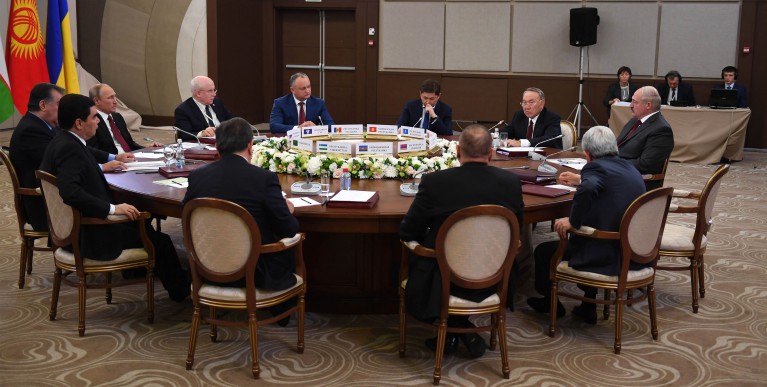 Meeting participants discussed cooperation within the EAEU and heard a report by the EEC. They also noted the EAEU’s positive impact on the member states’ economies and the importance of enhancing integration processes.

The sides expressed confidence that the implementation of the agreements reached at SEEC meetings would enhance cooperation among EAEU countries to a higher level.

The specifics of the documents signed at the CIS Summit were decided upon during the Oct. 10 CIS Council of Foreign Ministers meeting attended by Kazakh Foreign Minister Kairat Abdrakhmanov and other CIS foreign ministers.

Ministers at the CIS Summit also agreed to develop proposals presented by Nazarbayev at the 2015 Summit in Burabai to improve the organisation’s efficiency. At the 2016 meeting in Bishkek, the leaders also adopted measures to modernise the organisation that were based on Kazakh proposals.