The history of relations between the people of Kazakhstan and Croatia dates back to the times of the Silk Road through which trade caravans from China and Central Asia transported silk, wool, fabrics, jewellery and other goods to Europe. 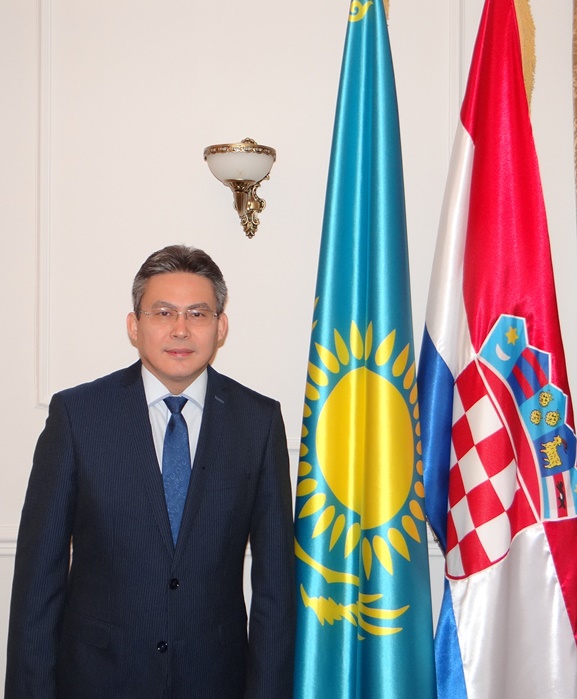 In the 13th century, the brothers Niccolo and Maffeo Polo travelled as merchants through the lands of southwestern Kazakhstan, visiting the Ustyurt plateau, the Syrdarya and Amudarya river valleys and the ancient Kazakh cities of Otrar and Almalyk. Niccolo’s son, the great explorer Marco Polo, native of the Croatian island of Korcula, studied the customs of the Great Steppe and the language and traditions of nomadic tribes, describing them in his famous book “Livres des Merveilles du Monde” (“Book of the Marvels of the World”).

During the First World War, the future leader of Yugoslavia, young Croat Josip Broz Tito, was a prisoner-of-war in the southern Siberian city of Omsk, near the border with Kazakhstan. In the difficult conditions of Tito’s captivity, the family of Kazakh farmer Issa Zhaksenbayev gave him shelter and work and helped him survive.

The people of our two countries fought together against fascism during the Second World War. In the battles for the liberation of Yugoslavia, the 73rd Guards Division, formed in Kazakhstan, was noted for its special courage. As part of the 18th partisan brigade of the 30th Yugoslav Division, Kazakh soldiers, along with Russians, Ukrainians, Serbs and Croats, fought valiantly. The Kazakh soldier Khalil Salimzhanov, for his service in the battles for liberation of the people of Yugoslavia, was awarded the Silver Star and the Order of Bravery as well as the Partisan of Yugoslavia Honorary Badge by the Presidium of the Socialist Federal Republic of Yugoslavia.

In the post-war years, Croatia, as part of the former Yugoslavia, actively participated in the development of economic ties with the Kazakh SSR. In the period of industrial construction and the development of Virgin Lands, Yugoslav specialists took part in building industrial facilities, schools, hospitals and commercial centres. Consumer goods, footwear and clothing produced in Yugoslavia were popular in Kazakhstan. Imports from Yugoslavia were dominated by raw materials, machinery and equipment.

The quarter-century spanning the turn of the 20th and 21st centuries was a time of large-scale historical changes. The new independent states of Kazakhstan and Croatia appeared on the political map of the world. At the dawn of their independence, the Croatian people faced difficult times due to the military conflict in the Balkans.

Having overcome the crises of the 1990s and challenges in establishing and developing statehood, Kazakhstan and Croatia became recognised as independent sovereign states. Our countries have experienced profound and progressive changes, the general features of which included large-scale state reforms, modernisation of society and economy, improvement of the living standards of the population, and strengthening of the role of the two countries in international affairs.

Oct. 20, 2017, marked the 25th anniversary of the establishment of diplomatic relations between Kazakhstan and Croatia. Today, the people of our countries are bound by traditions of friendship, mutual respect and trust. Successful dialogue is being developed at the highest level.

By now, interstate relations have been brought to a high level by common efforts. Joint work is under way to expand the contractual and legal frameworks linking the countries. Dialogue is maintained through the Ministries of Foreign Affairs and specialised government agencies. Inter-parliamentary and interregional relations, business and cultural-humanitarian contacts are developing as well.

It is encouraging that the foreign trade turnover between Kazakhstan and Croatia has a stable growth trend. According to Kazakh statistics, from January to September of this year, the volume of mutual trade has exceeded $300 million and continues to grow. About 30 Croatian companies are registered in Kazakhstan in the fields of construction, pharmaceuticals and medicine, the food industry and trade.

Astana and Zagreb share similar positions on key issues on the international agenda. Our states closely cooperate within the framework of the UN, the Organisation for Security and Cooperation in Europe (OSCE) and other international organisations on issues of international security, the fight against international terrorism, organised crime, illicit trafficking of narcotic drugs, illegal migration and other transnational challenges and threats.

On Oct. 11-12, on the eve of the 25th anniversary of diplomatic relations between Kazakhstan and Croatia, political consultations at the level of deputy foreign ministers took place in Zagreb.

Agreements were reached on expanding the legal framework and signing bilateral agreements in various fields. The parties agreed to promote the development of inter-parliamentary, inter-ministerial and interregional relations, as well as business and cultural-humanitarian contacts. In this context, an important step will be the opening of the Embassy of Croatia in Astana next year.

Following the consultations, the deputy ministers signed the Plan on Cooperation between the Ministries of Foreign Affairs of Kazakhstan and Croatia for 2018-2020, exchanged signed texts of the Convention on the Avoidance of Double Taxation and agreed to harmonise draft documents on cooperation in air transport, agriculture, energy, tourism, education and culture

The constituent meeting of the Croatian-Kazakh Friendship Society held recently in Zagreb and attended by public figures and representatives of science, education and culture was an important event. During the meeting, Chairman of the Croatian-Kazakh Friendship Society Andrija Karafilipovic noted that the people of our countries are tied by traditions of friendship and cooperation. The special role of society was also noted as an effective instrument of people’s diplomacy and an important channel of cultural ties.

Looking into the future with optimism, Kazakhstan and Croatia intend to continue pursuing the policy of comprehensive strengthening and development of bilateral relations to benefit the people of the two states.

The author is ambassador of Kazakhstan to Croatia.