By Anuar Abdrakhmanov in Sports on 19 September 2017

ASTANA – After a year-long hiatus, Kazakhstan’s men’s tennis team returned to the Davis Cup World Group by defeating Argentina in the playoffs. 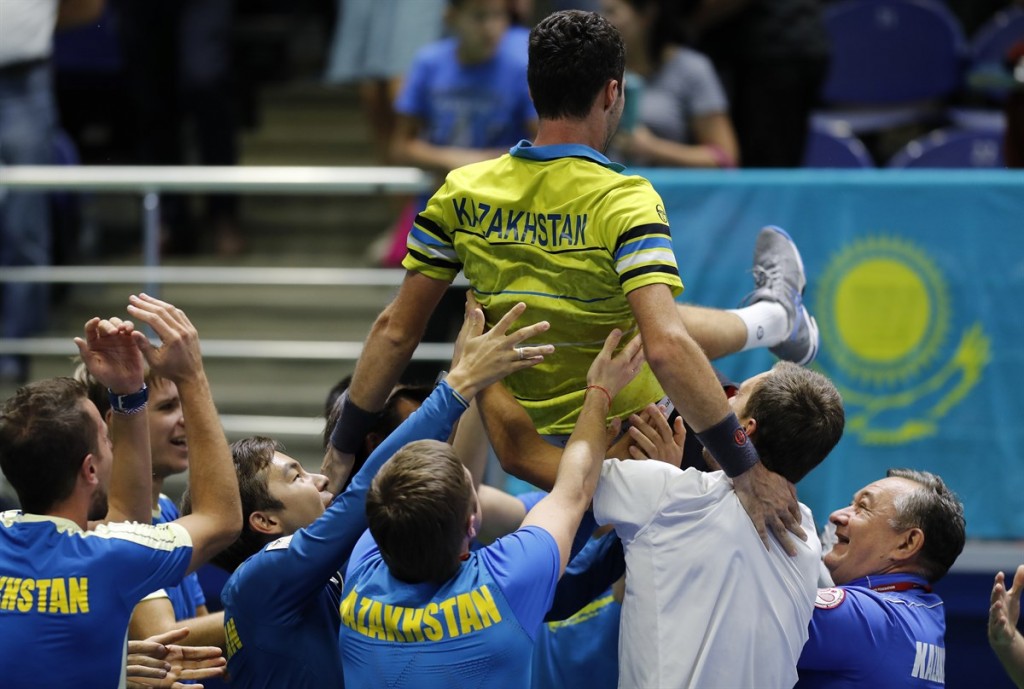 The Argentines, the current Davis Cup champions ,were the clear favourites in the match, even though their 3-2 home loss in February to Italy sent them to the playoffs. Kazakh captain Dias Doskarayev, however, never stopped telling his players they could surprise any opposition.

“There are always chances. We are playing at home on an important stage. We have good statistics at home, regardless of the opponents. Of course, we are playing the current Davis Cup champions and it will be very difficult. The most important thing for our tennis players now is to prepare well and believe in victory. Our players can do it; they proved it many times,” he said before the match, which was contested Sept. 15-17 at Astana’s National Tennis Centre.

Kazakhstan’s number 1, Mikhail Kukushkin, met Guido Pella in the first game, earning the first point for his team with a 6-7, 7-6, 6-2, 6-4 victory. The match was quite long, lasting more than three hours.

“I have never played the Argentinean in individual tournaments, but I knew that my opponent was a very strong player, so I set my mind on the hardest fight with him. I believe I could only have won over Pella thanks to our fans. They gave me great support and helped me win,” said Kukushkin after the match.

The guests equalised the score in the match after Argentinean leader Diego Schwartzman defeated Dmitry Popko 6-4, 6-2, 6-2.

Few could suggest Kazakhstan would win the doubles. The loss of Andrey Golubev, who was always good in this format, meant it would be very difficult to be victorious on the second day. Initially, Denis Yevseyev was to partner with Aleksandr Nedovyesov, but shortly before the game Doskarayev made a substitute, introducing Timur Khabibullin. The decision proved to be the right one. In a very difficult game, Nedovyesov and Khabibullin earned an important win against Maximo Gonzalez and Andres Molteni.

Kukushkin vs. Schwartzman was the decisive confrontation of the three-day match. The Kazakh player moved better and was more accurate in key episodes, which allowed him to beat his opponent 6-4, 6-4, 7-6, bringing his team an early victory and an elite place in next season’s Davis Cup.

“If you play for your country and your people with all your heart, if you fully believe in yourself and the team, you can beat any opponent, even such a strong one as Argentina. I congratulate everyone on our victory. Kazakhstan’s tennis is now at a very high level. More and more people are getting interested in it. Some people take tennis classes, others come to watch and support the players. It is great. I hope that this victory will contribute to this great trend,” said Doskarayev.