By Zhanna Shayakhmetova in International on 30 August 2017

ASTANA – The Pugwash Council called upon all governments and people to reflect on the grave and irreversible ecological and humanitarian consequences of nuclear weapons and to spare no efforts towards achieving a nuclear-weapon-free world. This was stated in the Astana Declaration “From Prohibition of Nuclear Testing toward Prohibition of Nuclear Weapons” Aug. 29 at the 62nd Pugwash Conference. 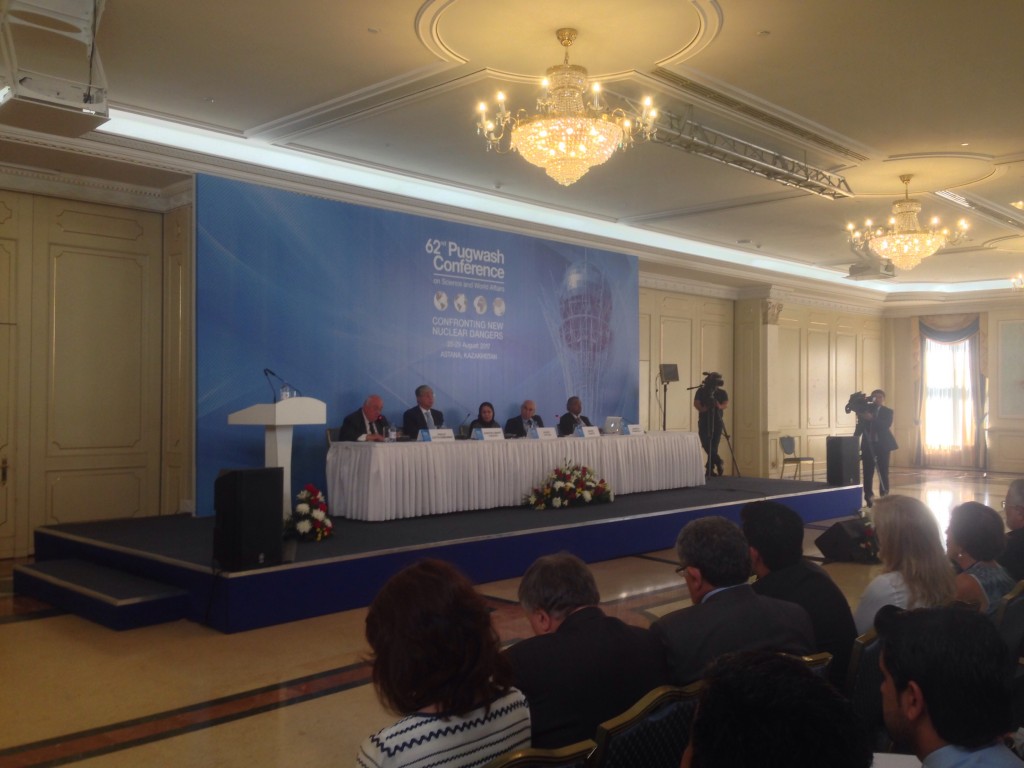 “One of the initiatives that changed the tide in the fight against nuclear weapons testing was at Semipalatinsk. The decision by Kazakhstan to permanently close the Soviet nuclear test site was promulgated on Aug. 29, 1991. It became one of the significant factors that led to the moratorium on nuclear testing, followed by the successful negotiation of the Comprehensive Test Ban Treaty (CTBT) in 1996,” according to a council document.

At the initiative of The ATOM Project, the conference participants stood at 11.05 am to observe a minute of silence as a mark of respect for victims of nuclear tests on the Aug. 29 United Nations (UN) International Day against Nuclear Tests.

Parliament Senate Chairman Kassym-Jomart Tokayev said in his conference closing speech that “the Pugwash conference has been known for bringing scientific insight generating meaningful and collaborative dialogue on the most pressing issues facing humanity and seeking a world free of nuclear weapons.”

The Pugwash has a wide outreach engaging the young generation and groups worldwide.

“The Astana meeting brought a new momentum to this important work. It’s not a coincidence that our country was offered to hold this forum. Today the international community marks the International Day against Nuclear Tests. That day 26 years ago the Semipalatinsk nuclear test site was closed down by the historic decree of Kazakh President Nursultan Nazarbayev who all these years has been playing a key role in global efforts in non-proliferation and disarmament areas,” he said.

Tokayev added that the contact with the Pugwash will be maintained in the future as it fulfils its noble mission promoting the cause of peace through dialogue across divides and offering new thinking and creating approaches to emerging challenges.

In his concluding remarks, Pugwash Secretary General Paolo Cotta-Ramusino spoke about the topics discussed by the working groups during the five-day conference.

“The conference started with the test ban treaty saying that in Kazakhstan, the legacy of the nuclear tests is a serious problem. We wanted to use this opportunity to strengthen and to stress the importance of bringing CTBT into force. Then we discussed the proposal in the UN for a new treaty, which in fact is a total nuclear ban. We are looking forward to helping the treaty itself to be expanded the most as we can,” he said.

A nuclear-weapon-free zone and WMD-free zones in the Middle East and nuclear risks were also discussed.

The security challenges in Central Asia and civilian nuclear energy also drew the attention of the scientists at the event.

“The radical groups are getting more and more relevance in world policy and they have an influence on the situation where we have conflicts. On the last day, we discussed the nuclear agreement concerning Iran and risk that this agreement can be dismantled. Finally, there is a strong correlation between nuclear energy and capability of building nuclear weapons,” he added.

“The idea of creating bank for Low Enriched Uranium (LEU) is a part of the deal of building the international fuel cycle centre,” he stated.

Since 1945, nuclear weapon testing has played a primary role in the horizontal and vertical proliferation of nuclear weapons. Such testing has also inflicted great damage on the environment and people, especially in areas adjacent to nuclear test ranges but also globally. The cumulative consequences of more than 2,000 nuclear tests conducted since 1945 by nuclear weapons states can be compared to a slow-motion limited nuclear war, waged by them on themselves and on humankind, the declaration said.

The document concluded: “This year marks the 60th anniversary of the first Pugwash Conference. The tragic results of the Castle Bravo hydrogen bomb test by the US in 1954 in the Marshall Islands led Joseph Rotblat to set in motion what has now become a truly global movement. Here in Astana, on the International Day against Nuclear Tests, and aware of Kazakhstan’s important contributions to this cause, the Pugwash Council calls upon all Governments and the people of the world to reflect on the grave and irreversible ecological and humanitarian consequences of nuclear weapons and to spare no efforts towards achieving a nuclear-weapon-free world.”