FC Astana defeats Celtic at home, but fails to qualify for Champions League

By Anuar Abdrakhmanov in Sports on 26 August 2017 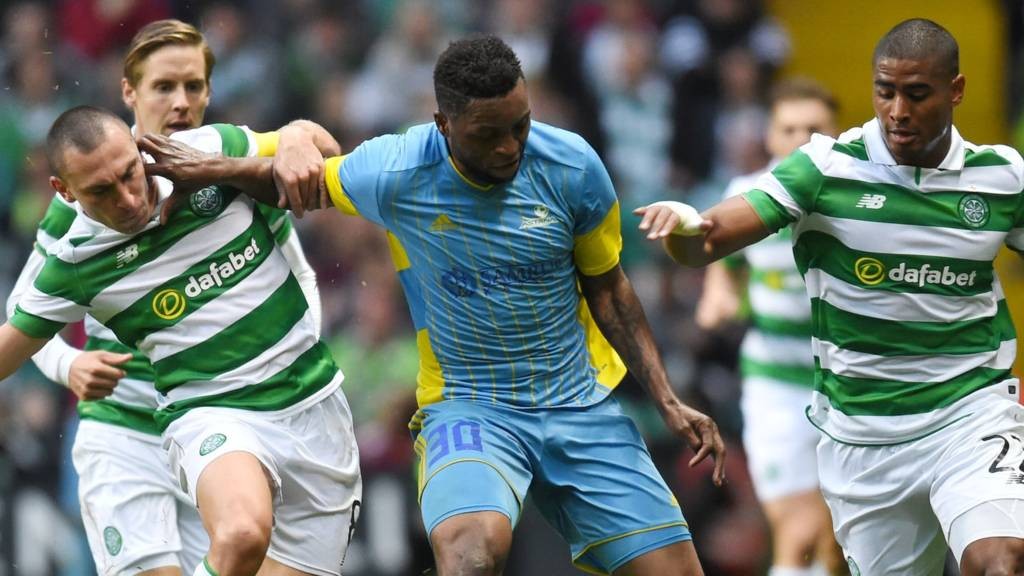 The Scots had already virtually secured their berth in the Champions League group stage in the first game at Celtic Park, where they crushed the opposition with a more-than-confident 5-0 win. Astana manager Stanimir Stoilov admitted at a press conference ahead of the return leg that his team had very little chance to cut the deficit. Few, however, expected the players would come so close to working a miracle.

From the first minutes, Astana started attacking its opponent’s goal. Patrick Twumasi had a nice shot at the target, but Celtic’s goalkeeper Craig Gordon blocked it. Another attempt came a bit later from Serikzhan Muzhikov, but this time the ball missed the goalpost. Junior Kabananga had some scoring chances as well, only to be blocked by Gordon. Finally, in the 26th minute, Dmitry Shomko made a long-range shot and the ball ricocheted off the defender’s foot into the Celtic’s net. The Scots evened the score six minutes later, however, when Scott Sinclair got the ball at the left wing and shot it into the far corner.

Stoilov changed the game scheme at halftime, restructuring into three central defenders and placing Abzal Beisebekov at right flank. The moves proved fruitful at the 47th minute. Srdjan Grahovac made a cross into the penalty area, where Muzhikov confidently sent the ball into the goal. Two minutes later Shomko made an accurate pass to Twumasi, who sent a header behind Gordon into the net.

At the 69th minute, after a clear run on goal Twumasi scored his team’s fourth of the night and for the first time the chance of overturning the deficit from the first match seemed realistic. The team needed to score three more goals, but given how confidently they scored the last three it looked like the Celtic players were close to a panic. Astana had at least two more scoring chances in the following minutes, but they lacked a bit of luck.

Playing all attack and a huge desire to score often imply a heightened risk of missing a counter-strike and that is exactly what happened. In the remaining time, Celtic made a few quick attacks of its own and scored two more goals, making it 4-3 and thus dashing the hope of the Kazakh fans.

The Kazakh titleholders still secured a win in the match, but it was Celtic that eventually made it to the group stage of the Champions League. As a result, Astana will now continue in the Europa League, the second most important continental club tournament. On Aug. 25, after a draw in Monaco, they learned that their opponents in Group A will include Villarreal CF, Maccabi Tel-Aviv FC, and SK Slavia Praha.

“My players showed good football and the fans should have liked that. If we had scored another goal when we had it 4-1, there could have been a chance. I am glad we won. If it were not for the mistakes in the first match, we could have been closer to the Champions League. The team will continue growing, but today the Europa League is a good achievement for us, [too],” said Stoilov.