ASTANA – Charity Tour de Burabay, an annual cycling ride for charity, gathered 1,500 people Aug. 19, including 718 participants along with professional cyclists, sports and government representatives, to experience a 30-kilometre journey through Burabay scenery, one of the most popular resort areas in Kazakhstan. 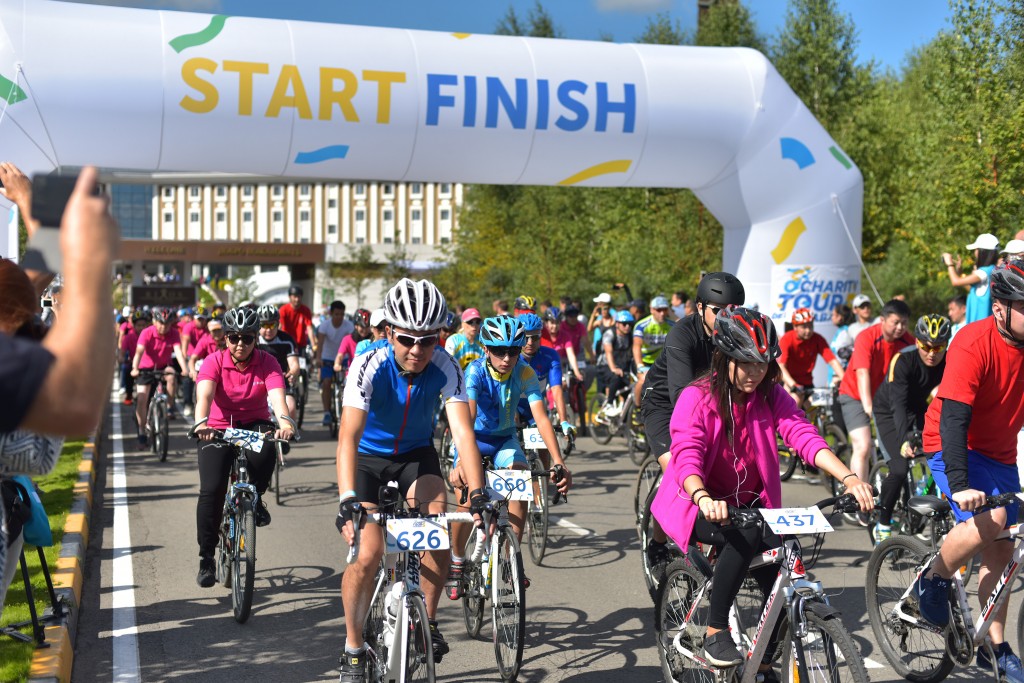 Opening the event was Kazakhstan’s Minister of Culture and Sports Arystanbek Mukhamediuly. He said the event has helped increase the popularity of cycling in Kazakhstan and noted the event’s contribution to providing medical care to children.

Among the 12 items sold at the auction were boxing gloves of Gennadiy Golovkin, Kazakhstan’s boxing superstar and unified middleweight World Champion, which sold for nine million tenge (US$27,054) and the bicycle that once belonged to veteran Italian cyclist and Astana ProTeam member Michelle Scarponi who died in a road accident in April sold for 20.5 million tenge (US$61,623).

Within five years, total proceeds have grown 14 times and made 463.5 million tenge (US$1.4 million) with a seven-fold increase in the number of participants.

Participants enjoyed a picnic soon after the finish at the Rixos Borovoe resort.

The common goal encouraged the participants, said Akbota, 24, an amateur cyclist taking part in the event for the first time who preferred to be referred by her first name only.

“The idea behind the event is good and I was happy to see so many people gathering together and willing to contribute for a good cause,” Akbota told The Astana Times.

“It was a challenge for me to drive 30 kilometres, because I have never covered such a big distance within a day. I liked the spirit of people and not only sports people, but representatives of various companies and just bike lovers as me,” she added.

Their enthusiasm and support during the event made her feel a part of something bigger, she noted.

Madina, 24, also participating in the event for the first time, agreed that the atmosphere urged participants to ride for the common goal.

“It would be great if the event participants continue helping people in need, children and other vulnerable segments of population rather than confining these activities to one day. I believe this will help us achieve more united society and higher level of development,” she said.