ASTANA – The Fallout, The Artwork of Karipbek Kuyukov, a personal exhibit featuring 20 paintings by the famous Kazakh artist and ATOM Project Honorary Ambassador, opened Aug. 9 at the Kazakh National Museum. The event, organised by the museum and supported by the Kazakh Ministry of Foreign Affairs, highlights the heavy consequences of nuclear weapons use for the world and serves as a call to action against such weapons. 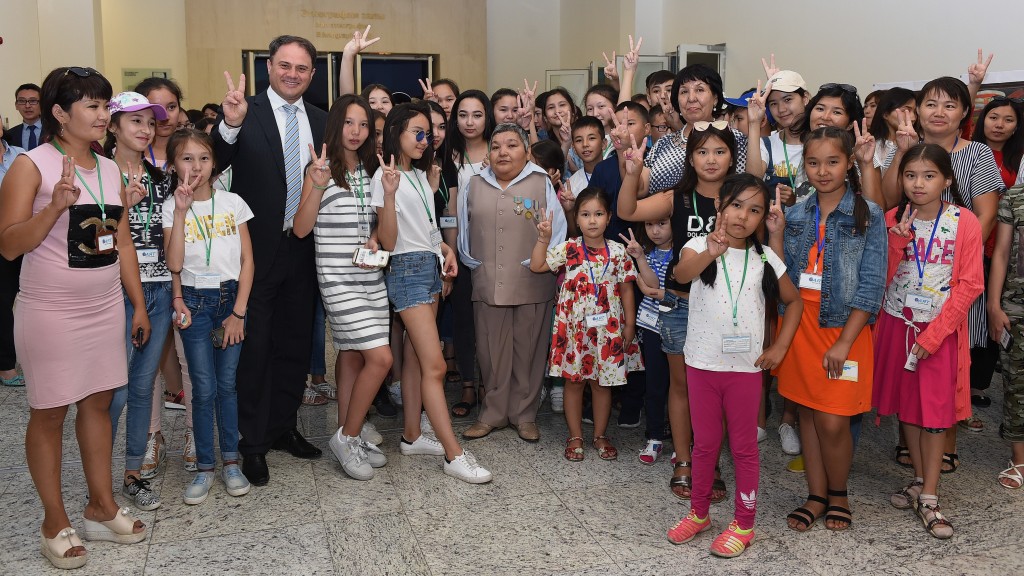 Born in the village of Yegindybulak, 100 kilometres from the former Semipalatinsk nuclear test site, Kuyukov remembers the horror of nuclear explosions and saw many children who were born with disabilities. A number of them could not be shown to others beyond their family and lived their whole lives in seclusion. 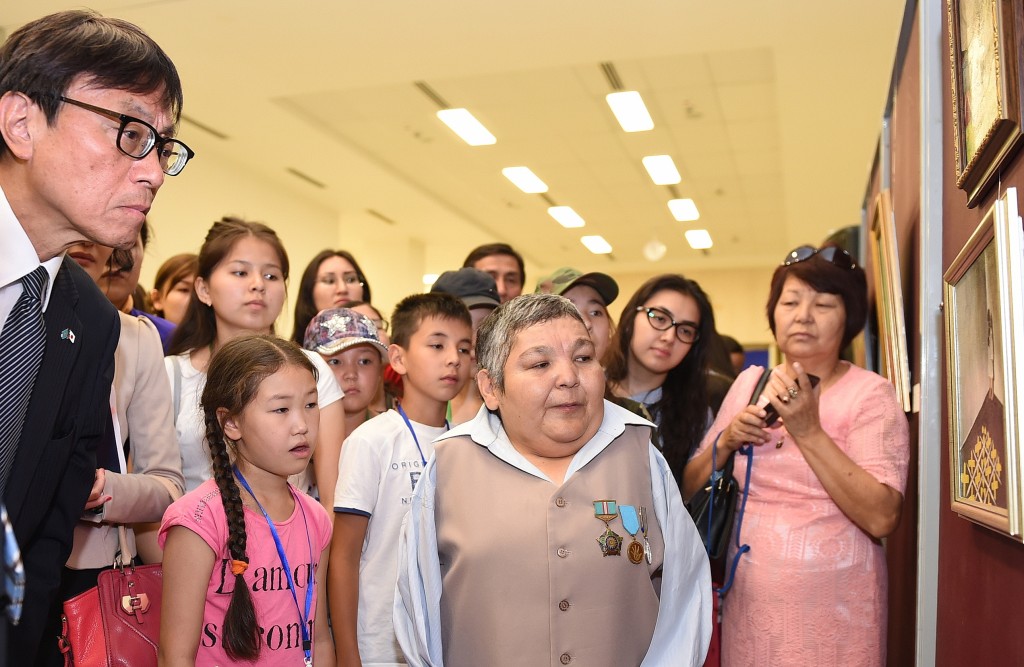 “I am very proud to live in a country that was one of the first to ban nuclear tests. I believe that my most important goal in life is to tell the whole world about what these nuclear tests lead to. You are all healthy people, you have arms and legs and the future is in your hands. We shall strive for the complete elimination of nuclear weapons from the face of the earth. I hope you remember my words for the rest of your life,” Kuyukov told the journalists, visitors and mostly school children who attended the exhibit’s opening ceremony. 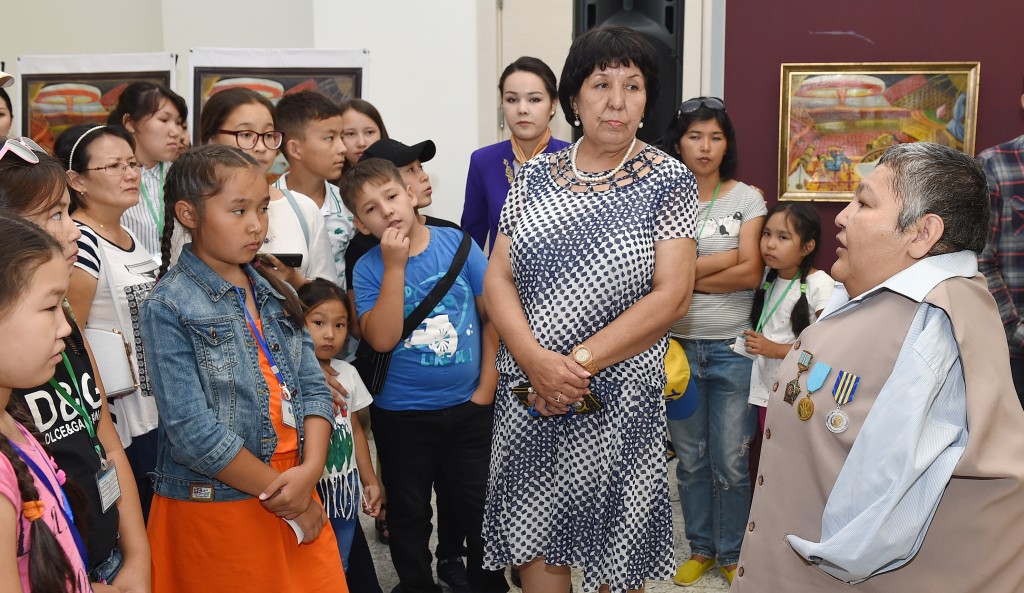 “Today’s exhibition is devoted both to the sufferings of Kazakh people and the relentless struggle and tremendous faith in the success of our common deal – the building up of a world without nuclear weapons. As it is known, more than 450 nuclear tests were conducted at the Semipalatinsk test site in the second half of the last century; as a result, more than 1.5 million Kazakh citizens were affected by those tests. Many of them, like Kuyukov, suffer birth defects, lifelong debilitating illnesses and early death,” said Kazakh Deputy Foreign Minister Roman Vassilenko. 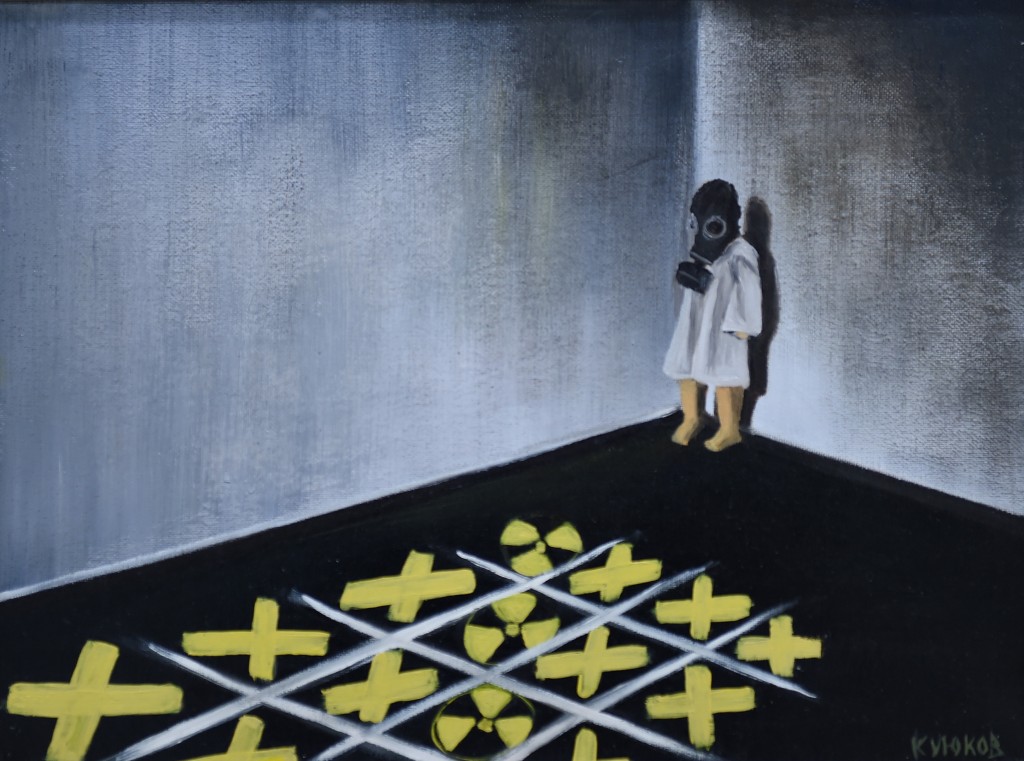 Kuyukov’s paintings were previously presented at the UN offices in both New York and Geneva, as well as at the International Atomic Energy Agency (IAEA) and the Comprehensive Nuclear-Test-Ban Treaty Organisation (CTBTO) in Vienna. Throughout the world, the pictures arouse understanding and interest among nuclear non-proliferation specialists and ordinary people.  Looking at his art, they discover the history of nuclear tests in Kazakhstan and understand why the country is convinced that nuclear disarmament and elimination of nuclear weapons are essential. Kazakh President Nursultan Nazarbayev, Nevada-Semipalatinsk anti-nuclear movement founder Olzhas Suleimenov and Kuyukov have been fighting for nuclear disarmament around the world for more than 25 years and have been recognised as true leaders in this realm, said Vassilenko. 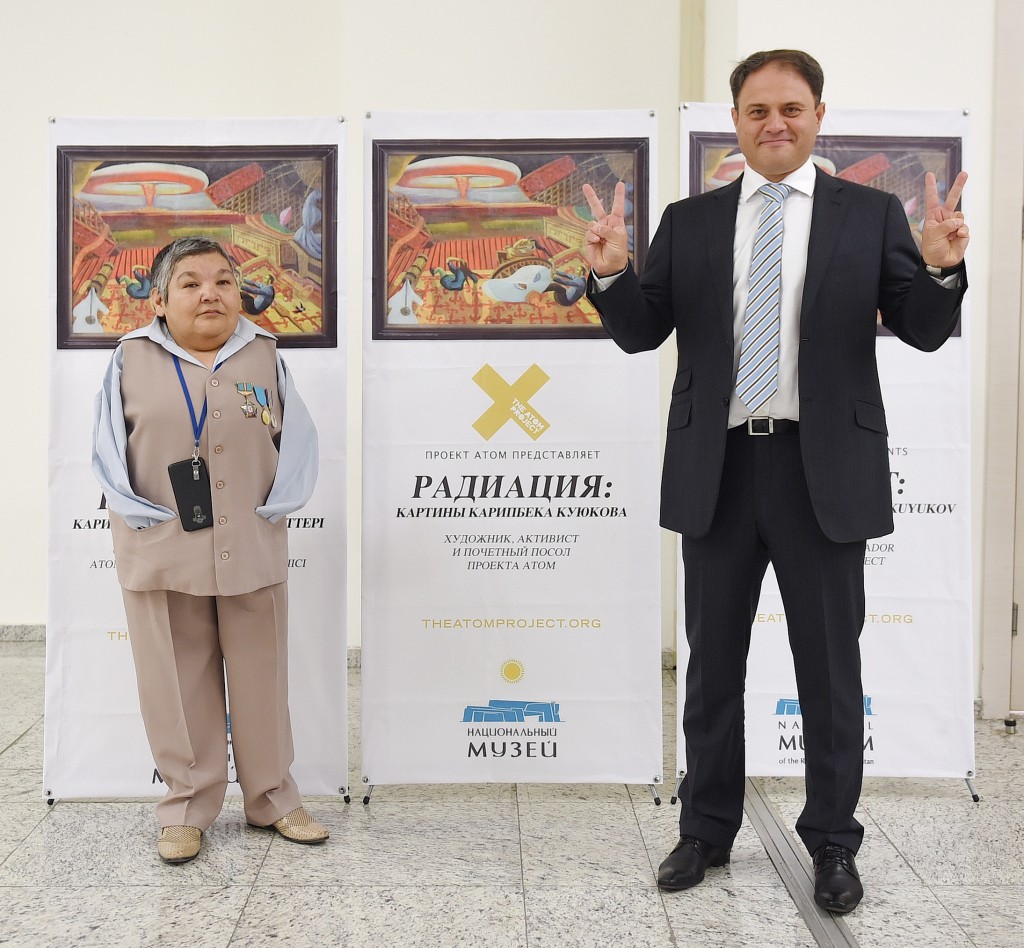 “This exhibition is organised in response to numerous requests from people partly familiar with the works of Kuyukov, not indifferent to his creativity or to his high mission. Some of them plan to visit Astana this month to visit EXPO 2017. Among them are delegates from the Pugwash Conferences on Science and World Affairs, who will meet in Astana on Aug. 25-29 on the eve of the International Day against Nuclear Tests and on the anniversary of the Semipalatinsk test site closure,” he said.

“If we are really committed to the idea of ​​nuclear disarmament, then we must not remain silent; we must act. On Aug. 29, 2012, President Nazarbayev came up with a new initiative called the ATOM Project (Abolish Testing. Our Mission). Over the past five years, a large number of people around the world have learned about the history of nuclear testing and Kazakhstan’s activity against nuclear weapons and supported the online petition of The ATOM Project to help bring into force the Comprehensive Nuclear Test Ban Treaty. Despite the fact that this document has existed for more than 20 years, it has not yet entered into force and requires the support of certain states. However, at least 300,000 people from more than 100 countries have signed an online petition and every day the number of project supporters is growing,” he added.

Every year, Japanese people honour the victims of the atomic bombing of Hiroshima and Nagasaki on Aug. 6 and 9. People recognise the similarity of the historic destinies of the Kazakh and Japanese peoples affected by nuclear weapons; therefore, both countries focus special attention on cooperation in this area.

“Aug. 6, 9 and 29 remind humanity of how peace in the world is important for the development of civilisation and the culture of mankind. The works of Kuyukov will give new impetus to our desire to build a world without nuclear weapons,” said Japanese Ambassador to Kazakhstan Ichiro Kawabata who was a guest of honour at the exhibition launch.

The exhibition is open for capital residents and guests until Aug. 29.