ATOM Project ambassador pleads to recognise nuclear threat, stand up against it

By Dmitry Lee in International on 18 August 2017

ASTANA – The people of Kazakhstan have multiple stories to share on the eve of the Aug. 29 International Day against Nuclear Tests, because this day is part of their fate, part of their national identity. 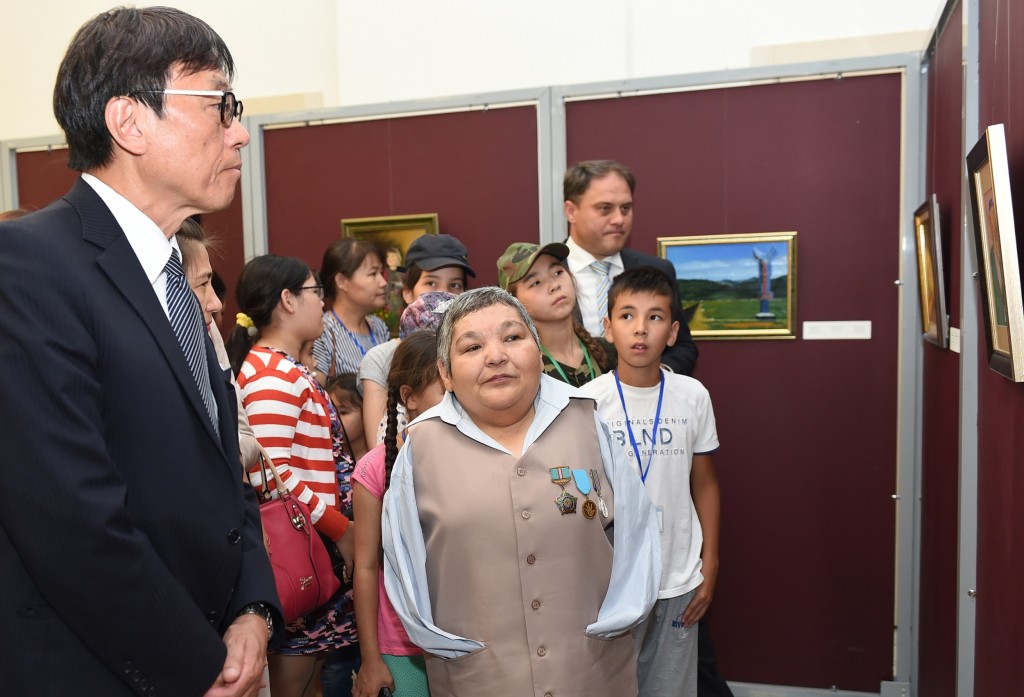 Along the thorny path the country had taken there lie countless stories of 1.5 million lives which have been affected by nuclear tests conducted by the USSR from 1949-1991 on the territory of the infamous Semipalatinsk nuclear test site.

Karipbek Kuyukov, honorary ambassador of The ATOM Project, was born without arms as a result of his parents’ exposure to nuclear weapons testing at Semipalatinsk. To this day, he continues his life-long journey of fighting the madness of the nuclear arms race.

In his numerous paintings he depicts the pain of his people, calling for dialogue to rid the world of nuclear weapons forever. He launched another of his many exhibitions Aug. 9, displaying 20 paintings at the National Museum in the Kazakh capital.

On the eve of the day observed to increase awareness and education about the effects of nuclear weapons, Kuyukov spoke to The Astana Times in an attempt to appeal to the people of the world amid the heightening North Korea-U.S. controversy.

“First of all, I feel sad for the ordinary folk who live in North Korea. We [in the USSR] have been through that, too, we know. We thought having weapons of mass destruction means being stronger and more powerful, but it is like an illusion. For me, it’s like carrying a huge rock up a steep mountain on my shoulders,” he said in an exclusive interview.

“The ongoing polemic between North Korea and the U.S. needs to be settled by a third party, an independent mediator, I believe. Astana has the experience of hosting peace talks and I think this is a really hard job, but perhaps Kazakhstan could offer its hand to help resolve the issue,” he added.

For Kuyukov, Aug. 29, is first of all, the day of remembrance of the fallen as a consequence of the nuclear tests.

“I was really pleased that on Aug. 6 a Japanese delegation came to my house and spoke to me about the consequences of the nuclear explosions,” the artist said. “As you well know, Aug. 6 and 9, 1945 are the two black dates in the history of Japan and entire humankind. Those are the days when the U.S. dropped two atomic bombs on the cities of Hiroshima and Nagasaki and while the exact number is still unknown, the number of dead and injured with permanent health problems is estimated over 300,000 people.”

“It was also really nice to see Ambassador of Japan Ichiro Kawabata at the opening of my exhibition called ‘Fallout’ in Astana on Aug. 9. My exhibition is dedicated, most importantly, to all those who had suffered from radiation and the explosions in Hiroshima and Nagasaki,” he said.

Speaking of the first reaction to the bombings, Kuyukov stressed the whole country [USSR] was terrified and felt threatened and unsafe.

“We thought we could be next. Unfortunately, our fears brought the curse to our region, our land. From 1949 commences the tragedy of my homeland, when the officials launched the Semipalatinsk nuclear polygon,” he said calling the test site by its Russian moniker.

“I think that back in those Cold War times every country wanted to show its militaristic superiority. I can’t comprehend to this day why fate chose Kazakhstan to be used for the nuclear polygon. They said because it was a country with a small population with vast steppes, the damage inflicted by explosions shouldn’t have a big impact. We now, after 40 years, understand the true damage to those who lived close by the polygon,” he added.

“I am a son of Earth and I am really worried for our planet. I see the tendency of people just growing complacent with the terrorist acts, ongoing North Korean threats and use of chemical weapons and this worries me most of all. We should stand up against that; we should recognise such threats! That’s why such projects as The ATOM Project, launched by our President Nursultan Nazarbayev in 2012, are relevant today more than ever,” said Kuyukov.