ASTANA – Fifteen-year-old Taraz resident Isaac Mustopulo, who is committed to helping Kazakh children with special needs receive a full-fledged education, participated in the Human Library under the Perception Change Project, a creative communications initiative of the United Nations Office in Geneva. The July 18 event in the Swiss Pavilion at EXPO 2017 focused on climate change, mainstreaming sustainability into education, education in emergencies and refugee camps. 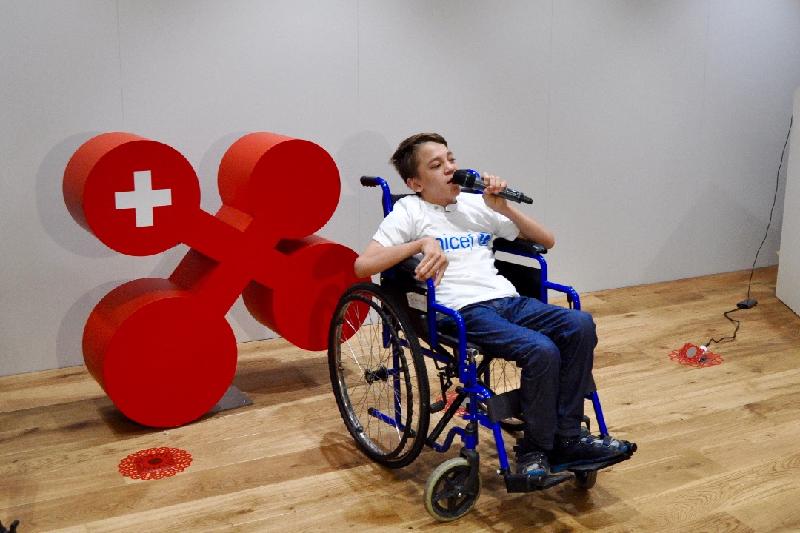 Mustopulo was diagnosed at eight months with cerebral palsy and his parents were told their son would have both mental and physical disabilities. Despite the doctor’s opinion, he finished the eighth grade this spring at a local school, where he excels academically and is actively involved in extracurricular activities. Mustopulo has become an advocate for inclusion and is working on a project that would introduce tutors in public schools for students with special needs.

“I am 15 years old and I have already made some conclusions for myself and today I will tell you about them. Usually, a person’s life goes like this: a baby is born, everyone loves him or her. He learns to crawl, walk and talk, first goes to kindergarten, gets first friends or even enemies and learns to communicate with peers. Then he goes to school, gets new knowledge and skills, learns to defend his interests, argue, learns to win and lose and falls in love. All of the above seem to me to be very important pillars in a person’s life. A person develops, chooses a profession, then creates a family and lives a full and happy life and I am sure that it cannot be otherwise. However, it happens very differently, …” he said.

The teen talked about his childhood and challenges he needed to overcome similar to other children with special needs.

“When it was time to go to school, I already had certain communication skills. However, it turned out that the school is not adapted for students who move in a stroller. No teacher was willing to focus on one student and not pay attention to the whole class. The teacher began to come to my house, but that was not enough for me either. My mother and I began to go to school regularly and to do everything that my classmates did,” he said.

As those lessons still did not satisfy him, this brave young man now has many extra classes, yet finds the time to lead an active social life, communicate with friends and work. He has participated in many school-age competitions and Olympiads, winning a number of them.

Most children with special needs, however, rarely venture beyond their homes, said Mustopulo.  Lack of socialisation leads to tragic consequences, as growing up, the person simply does not know who he or she is and who he or she wants to become.

“I know who I want to become. For this, I need to learn a lot and go to the university. However, I realise that no university will be ready to accept me, except for Nazarbayev University,” he added.

To help people with disabilities receive an equal education, the young reformer proposes to develop a mentor-tutor system. The tutor would provide individual educational programmes for students and direct the process of specific education at the school or university.

“I am developing the Indigo Project, a project that is very significant for me. … I will make every effort to implement it not only in my city of Taraz, but also throughout the country. Then, hundreds of students with special needs will be able to freely go to schools and universities,” he said.

Mustopulo ended by talking about his enthusiasm for astrophysics and a planned meeting with brilliant scientist Stephen Hawking, who is almost completely paralysed due to early-onset amyotrophic lateral sclerosis (ALS).