ASTANA – Kuryk international ferry port on the Caspian Sea, which started operation in the beginning of the year, has received 93 ships and more than 400,000 tonnes of cargo. Plans are underway to increase the number up to one million tonnes, according to a Kazakhstan Temir Zholy (KTZ) press release. 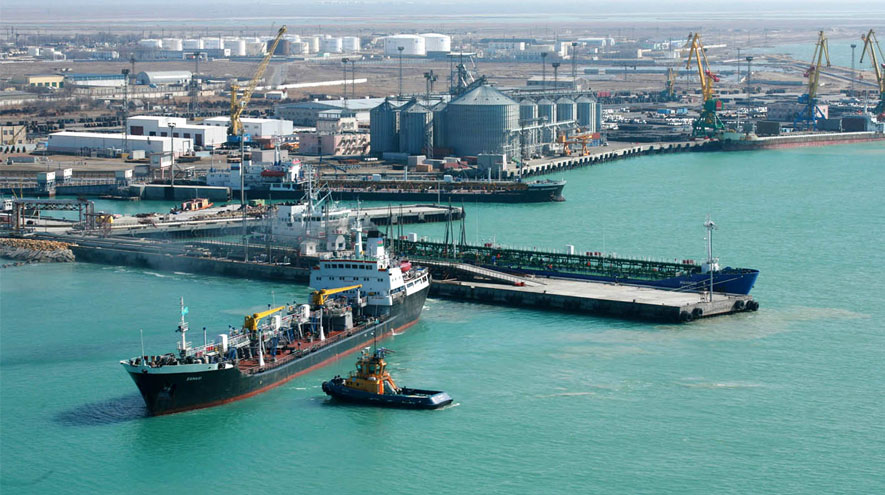 First Deputy Prime Minister Askar Mamin inspected the Nurly Zhol projects during his working trip to the Mangystau region. He also visited the construction site of the port’s second phase.

Phase one was launched in December. Last year, 44 areas were put into operation, including the railway road, which allowed handling ferries with freight cars in round-the-clock mode.

Kazakh President Nursultan Nazarbayev’s state-of-the-nation address specified the nation’s third modernisation must enhance vehicle access, which will provide transshipment of cargo vehicles. That access is part of the second phase of construction, as equipment at the ferry port is currently being built and offshore dredging has been completed. Construction of the eastern and western protection embankments is underway.

The new ferry crossing will provide multimodal transportation of all types of cargo, including liquids, significantly increasing transit cargo traffic and export potential across the Caspian Sea to the ports in Azerbaijan, Iran and Russia. Commissioning the crossing will expand Kazakhstan’s sea gates, appreciably increasing the potential of the Trans-Caspian International Transport Route. The route arrangement includes countries such as Kazakhstan, Azerbaijan, Georgia and Turkey.

Mamin was also familiarised with the execution of projects to reconstruct the region’s nationally important highways. A number of projects, such as Aktau-Shetpe (167 kilometres) and Shetpe-Sai Otes (60 kilometres), are proceeding and regional authorities have also started rebuilding the 85-kilometre Beineu-Akzhigit-Uzbekistan border highway. After the loan agreement is ratified this fall, reconstruction will begin on a 73-kilometre section of Zhetybai-Zhanaozen Road.

Mamin instructed local authorities to take measures to complete the work in the shortest possible time to significantly increase the region’s transportation potential.