By Aigerim Seisembayeva in International on 13 July 2017

ASTANA – Kazakh Foreign Minister Kairat Abdrakhmanov during the July 11 Ministerial Meeting of the Organisation for Security and Co-operation in Europe (OSCE) in Vienna expressed support for Austria’s OSCE chairpersonship as well as a common Euro-Atlantic and Eurasian security vision and briefed participants on Kazakhstan’s plans for its 2017-2018 United Nations Security Council membership among other updates. 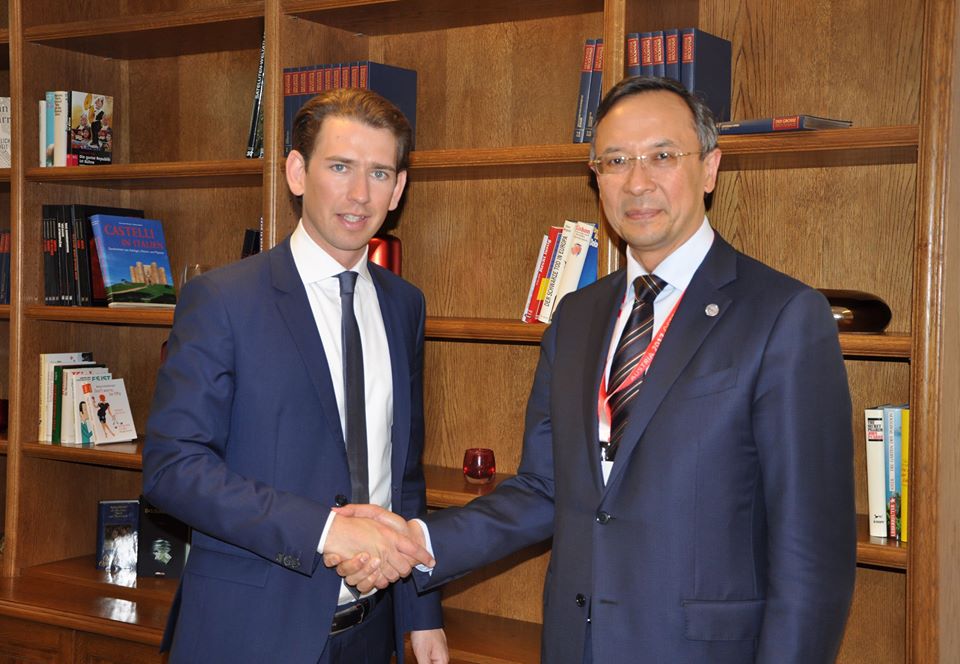 Abdrakhmanov, speaking at the plenary session, stressed the importance of an inclusive dialogue to promote the vision of a common and indivisible Euro-Atlantic and Eurasian security community in accordance with the provisions of the Astana Declaration of the 2010 OSCE Summit. The 2010 summit was convened on the initiative of Kazakh President Nursultan Nazarbayev.

He also noted the importance of economic and environmental projects for building confidence and co-operation among OSCE member states.

During a roundtable on preventing violent extremism leading to terrorism, Abdrakhmanov presented President Nursultan Nazarbayev’s key initiatives on creating the Global Anti-Terrorist Coalition (network), adopting the UN Global Counter-Terrorism Strategy and the Code of Conduct on Global Action Against Terrorism and Violent Extremism as well as creating a single list of terrorist organisations. He also talked about Kazakh measures on counterterrorism, efforts to implement the so-called third industrial modernisation and national identity modernisation programmes, as well as the Cyber Shield initiative.

Abdrakhmanov briefed meeting participants on Kazakh preparations for the presidency of the UN Security Council in January 2018 and the next Congress of Leaders of World and Traditional Religions in Astana.

His visit also included a meeting with the OSCE Chairperson-in-Office, Austrian Foreign Minister Sebastian Kurtz, where the sides discussed bilateral cooperation and interaction within international organisations, including in the context of Kazakhstan’s membership in the UN Security Council and Austria’s OSCE chairmanship. The parties noted the role of the EXPO 2017 international exhibition in Astana as a positive impulse for strengthening bilateral relations, as well as a factor contributing to the development of the OSCE economic and environmental dimension.

On the sidelines of the event, Abdrakhmanov held bilateral meetings with the heads of delegations from the European Union, Slovakia, Ireland, Canada and Cyprus, during which issues of bilateral and multilateral cooperation were discussed. These meetings focused on  attracting investments, trade turnover growth and the realisation of transit and transport potential. Kazakhstan’s delegation invited its partners to join the activities of the organisations and institutions that will be set up on EXPO 2017 premises, such as the Astana International Financial Center (AIFC), the Future Energy International Centre for the development of green technologies and investment projects and the IT start-up hub.

One day prior to the ministerial meeting, Abdrakhmanov met bilaterally with the leadership of international organisations based in Vienna.

At the  meeting with the UN Deputy Secretary-General, Executive Director of the United Nations Office on Drugs and Crime (UNODC) Yuri Fedotov, a wide range of issues were discussed in combating corruption, crime, drug trafficking, money laundering, human trafficking and countering extremism and terrorism.

Fedotov praised President Nazarbayev’s idea to create the Global Anti-Terrorist Coalition and stressed that recent organisational steps of UN Secretary General Antonio Guterres to consolidate the UN activities to combat international terrorism are a practical implementation of Nazarbayev’s initiatives. The UNODC welcomes foreign policy initiatives to maintain regional security, including the Central Asian Regional Information and Coordination Center (CARICC), as well as the Regional Hub for Countering Global Threats, established on the basis of the Academy of Law Enforcement Agencies of Kazakhstan.

During the meeting with the rector of the International Anti-Corruption Academy Martin Kreutner, Abdrakhmanov said it is important for Kazakhstan to examine the experience of other states in combating corruption. Kreutner noted that Kazakhstan has achieved impressive results in this area and can share its positive developments.

The 15th jubilee concert of the “Pearls of Kazakhstan – Melodies of the Great Steppe” project of Kazakhstan’s Embassy in Austria took place the same day. The project promotes Kazakh culture abroad and is dedicated to the 25th anniversary of Kazakhstan’s diplomatic service. “Kazakhstan,” a piece for piano and violin by a modern Kazakh composer Alibi Abdinurov, was premiered at the concert by Leila and Aida Akhmetovas.