By Anuar Abdrakhmanov in Sports on 23 July 2017 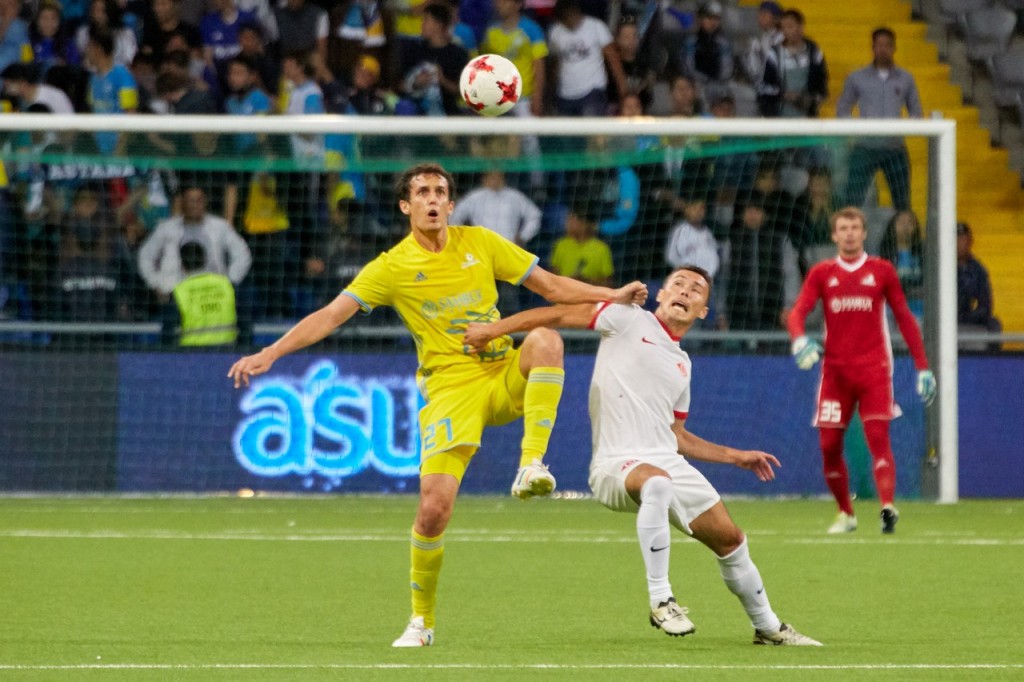 Few expected the Latvian club could eliminate the Kazakh champions. Through decent performances in the last two seasons, FC Astana has earned some reputation in European football and looked like the clear favourites. As the matches showed, however, the Latvians turned out to be tougher opponents than anticipated.

In the away first game, the Kazakhs dominated much of the time making more than 19 goal attempts, while the hosts rarely disturbed Astana’s goalkeeper Alexander Mokin. Patrick Twumasi, the visitors’ midfielder, managed to record the match’s only goal on a perfect penalty kick.

Although the 1-0 score gave a slight advantage ahead of the return leg, there were still some reasons for concern. In the second match, the Spartaks showed their grit and revealed many problems of FC Astana’s current squad. Early in the match, the Spartaks players created a good scoring opportunity, but Mokin saved the hosts. Astana then had a great chance as well, but Serikzhan Muzhikov’s shot hit a bit high over the bar. The Kazakhs gradually gained more control of the ball, yet failed to create really good scoring chances.

Hearing the second half starting whistle, Astana immediately rushed forward with a will to win. Twumasi soon shot into the far corner to open the scoring. The hosts had a few more scoring chances, but failed to make use of them. Shortly before the end of the match the Latvians managed to level the mark, as Edgar Vardanyan tied the game at 1-1 with a long-range shot. The match ended with a draw, which was enough to secure FC Astana’s progress to the next qualifying round.

“It is great that we went through. The match was difficult and now I have many questions for our players. Indeed, we should play better. I always said that there are no easy opponents in the Champions League. Now, we should make the right conclusions from these mistakes. If we go on failing in implementing scoring chances like this, [we will be facing problems] in the future,” said FC Astana head coach Stanimir Stoilov.

Kairat Almaty and Irtysh Pavlodar, the two other Kazakh clubs in the European Club competitions, played in the qualifying round of the UEFA Europa League, the second most important level. Both clubs were eliminated after losing by identical scores of 1-1 at home and 2-0 away to Albania’s Skenderbeu and Serbia’s Crvena Zvezda, respectively.

FC Astana will now play Legia Warsaw, the current Polish champions and one of the Central European nation’s most decorated teams. In their previous encounter with a Kazakh club, the Varsovians eliminated FC Aktobe three years ago, winning 1-0 away and 2-0 at home.

The Kazakh champions will host the first game 8 p.m., July 26, at Astana Arena before flying to Warsaw for the return leg scheduled for Aug. 1.