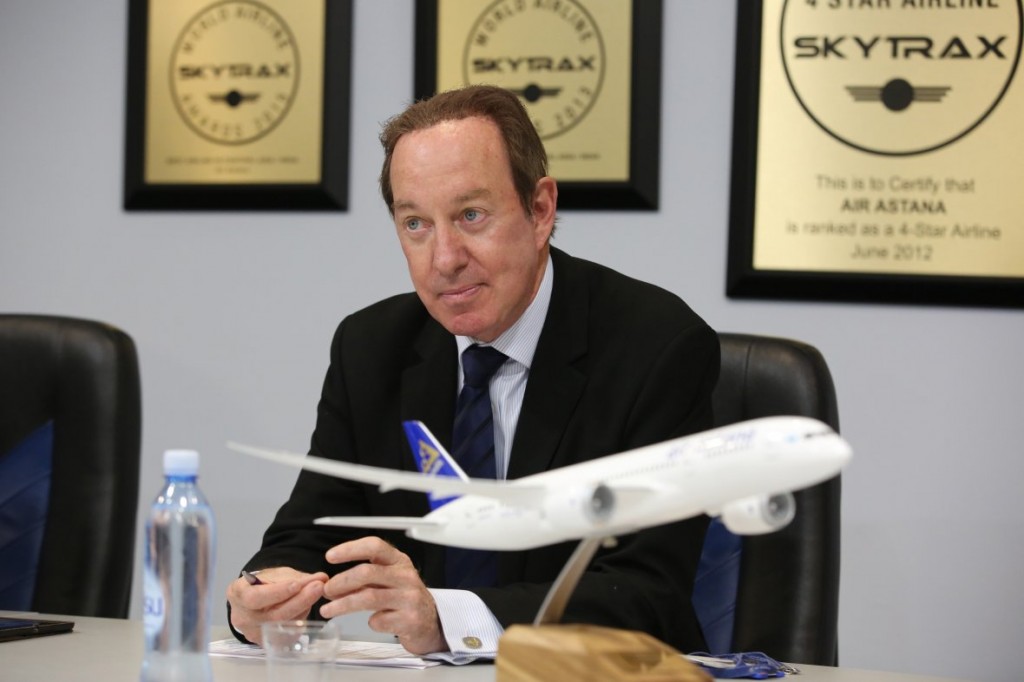 “The main indicator is the number of aircraft in our fleet. We increased it up to 31 over these years and we have already agreed to have 17 more in the next few years. Our airline is a commercial airline. We do not receive any subsidies or guarantees from the state or shareholders. We have no privileges in the purchase of kerosene or airport taxes. The only state investment in the company was the initial capital 15 years ago. We are convinced that the market sets the rules and an organisation has to have firm principles,” he noted.

The company’s commitment to those principles helped earn a sixth consecutive Skytrax Award at the recent Le Bourget Paris Air Show. Foster compared the airline’s success to a real estate purchase due to two common factors – time and location.

“Kazakhstan has a very good strategic location right in the middle between Europe and Asia, between Russia and Southeast Asia. If we look back at the beginning of the airline’s activities in 2002 after the collapse in the airline industry following the events in New York, everything was cheap and costs were minimal. We entered the market on time,” he said.

Lack of state subsidies ensures balance in the market as it helps separate business and politics, a critical factor for airlines, he added.

Kazakhstan offers a very small domestic market and therefore companies need to focus on transit traffic, which ensures growth, noted Foster. The new terminal at Astana airport has the potential to become a worldwide hub due to its compliance with global trends and standards as well as its strategic location.

“Flights with a stopover in Astana are the shortest between Europe and Asia. This helps reduce not only time, but also petroleum usage, which eventually decreases the expenses of the airline. More and more people travelling from Europe to Asia and back choose to fly through Kazakhstan,” he said.

Air Astana introduced Stopover Holiday, a programme to attract more transit tourists. Passengers travelling through Kazakhstan to an international destination with more than ten hours between connecting flights can stay in a hotel in Almaty or the capital for a dollar.

“Of course, it costs way more than one dollar for us, because we offer high-class hotels, but we believe attracting transit passengers is the right investment,” said Foster.

The company studied airline procedures in Southeast Asia, Singapore and Hong Kong, where stopover programmes have become a common practice, and it has proven to be successful. Nearly 800,000 passengers, or 20 percent of its passenger traffic, choose the capital as a stopover, he said. Air Astana plans to consolidate its efforts to increase the figure to 30 percent, with the total passenger traffic equalling nine million per year in ten years.

EXPO 2017, taking place in the capital until Sept. 10, is offering additional opportunities for the programme to gain ground. Passengers on international flight to or through the city receive a free ticket to the event.

Air Astana’s new routes are also helping to achieve the objective. In addition to 60 international and domestic destinations, the carrier recently initiated an Astana-Delhi flight, resumed Astana-Kiev and plans to launch new routes and increase the frequency of current ones in demand, such as Astana-London.

While the company’s emphasis is on the capital, Almaty is no less important.

“Although Astana will be turning into our main hub, we will not decrease our presence in Almaty. Neither do we plan to move our headquarters to Astana, because these are unreasonable spending and additional difficulties for our staff,” said Foster.