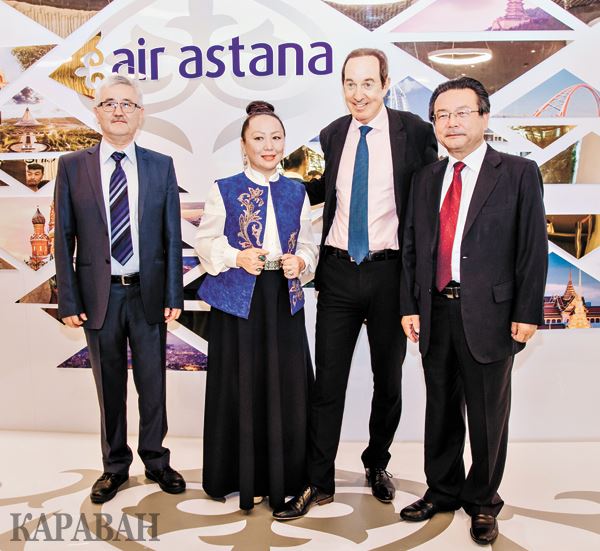 “Now we are at the middle of international exhibition EXPO 2017, which makes our meeting more symbolic. I am very glad that Kazakhs living abroad were able to be here with us today. I imagine how you feel coming back home after such long time abroad,” said Foster in his opening remarks, as quoted by Karavan.

“The main idea of the film is that we serve as a bridge in lives of our people,” the airline noted.

The documentary reveals six stories of people who were either born in Kazakhstan but in a twist of fate ended up living abroad and ethnic Kazakhs who were born abroad and stayed there. Yet, what all six people share in common is their love for the motherland and respect for their roots that they preserved for generations.

“Kazakhstan has always pulled me back and I was coming back here with great pleasure,” said Ewald Hering, doctor in traumatology and orthopaedics who has lived in Germany since 1992.

He was born in Konstantinovka village in the Pavlodar region. As a child, he used to help his father with farming and cattle, but his interest in medicine eventually brought him to then Tselinograd, current Astana, where he graduated from the Tselinograd Medicine Institute in 1992. He got a job in a hospital in Hannover, where he continues to work.

He still keeps in touch with his colleagues in Kazakhstan to exchange advanced practices and ideas, noted Hering.

One of the six stories is the story of Altynai Zhunussova, head of the Siberian Centre of Kazakh Culture in Omsk in Russia. “I was born in Omsk. My ancestors are from here as well. We are indigenous Siberian Kazakhs and we are very proud of that. We are connected to Kazakhstan by the Irtysh River. I frequently visit Kazakhstan and thanks to Air Astana it takes 50 minutes to fly from Omsk to Astana,” added Altynai.

Altynai recalls a moment from her childhood, when she was asked to sing a Kazakh song during the celebrations of the 60th anniversary of the Kazakh Soviet Republic at her school with warmth. “When I walked to the stage in one and half metre saukele [traditional Kazakh bridal headwear], other peers were giggling at what I was wearing. Then I realised that I was different and that we have a culture that we do not know,” noted Altynai.

At that moment, she decided to revive Kazakh culture in Omsk. She has been working with people of different ages in her centre, who were eager to immerse themselves in diverse and vibrant culture of Kazakh people.

The next story is Abdulvahap Kara, who was born in 1961 in Istanbul where he received a history degree from Istanbul University. “My ancestors lived in East Kazakhstan near Markakol Lake. In the 19th century, they moved to China and we have been living in Turkey for 65 years. As a historian, I believe my mission is to teach Kazakh history to young Turkish people,” said Kara.

Another person featured in the documentary, Seljuk Biyikli, was born in Paris, where he lives now with his wife, a Kazakh national born in Turkey, and two children, who speak Kazakh.

He works in the Airbus, but also manages Paris Kazakh Sport football club, which has two big teams of 40 players – half of them are Kazakhs, another half are Afro-Americans, Arabs and French. In 2010, it joined the French league and now plays in the seventh division.

The documentary also captures the story of Akbar Mazhit, head of a community of poets and scriptwriters in China, who has also been working in the Chinese Parliament for more than 20 years. He is also one of the honoured heads of Chinese cuisine and culture pavilion at the expo.

Speaking fluent Kazakh, he marked a special role of Kazakhstan in his books. “I write a lot about Kazakhstan and stories of Kazakhs in my books and I continue writing. More than 1.6 million Kazakhs live in China. They are engaged in farming, business and medicine,” Mazhit noted.

“I have many friends in Kazakhstan. After all, Kazakhs are all relatives,” added Mazhit.

Born in Almaty, Farida Chulakova has lived in Frankfurt since 2002. She finished Kulyash Baiseitova Secondary Specialised Music School for Gifted Children in Almaty, but then decided to move to Germany, where she works at the Russian Chamber Philharmonic.

“Kazakhstan is my motherland. I miss Kazakhstan very much and especially our food and people,” she noted.

Air Astana was not alone in producing the film, as well-known documentary director Zhanna Balakayeva together with a team of professionals assisted them.

“When the national carrier got in touch with me with an offer to direct this film, I was excited. Different people, different stories, but all of them love their motherland. Our heroes are not successful business people or Bolashak students. These are people of middle class and the representation of the diversity of the nation. They are committed to their life principles. We were searching for heroes in different ways – through acquaintances, the internet, embassies. It was a sort of extreme work, during which together with cameramen, we were like a reaction group flying to different parts of the world,” said Balakayeva, as quoted by Karavan.

Initially the organisers planned to include a larger geographical space, but due to time limitations and visa issues, they decided to have five countries.