By Anuar Abdrakhmanov in Sports on 13 June 2017

ALMATY – Kazakhstan’s national football team lost to Denmark 3-1 in the qualifying match for the FIFA World Cup 2018. The match took place in Almaty, where the host team had not played for more than a year, so the game aroused great interest in the southern capital. 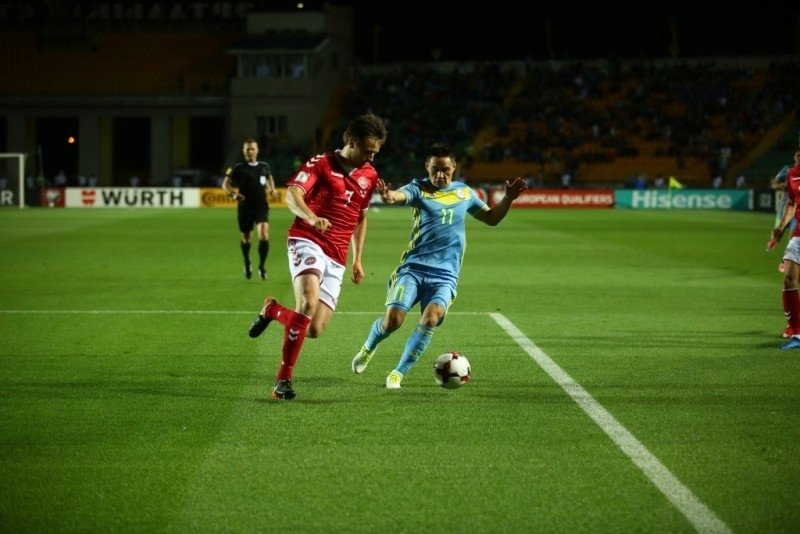 Even before the beginning of the match, local fans understood it would be very difficult to beat Denmark, which currently features such star players as one of England’s Premier League best players Christian Eriksen of Tottenham Hotspurs FC. As the Kazakh team managed surprising home draws last fall against higher-ranked Poland and Romania, however, there were hopes something similar could happen in Almaty.

It was clear from the first minute that the hosts were determined to show their best. They kept the ball for long periods and the visiting team’s goalkeeper on his toes. Azat Nurgaliyev had a good scoring chance, but the midfielder shot at an acute angle and the ball hit above the net. Georgi Zhukov then made an inaccurate long-range shot.

Unfortunately, the initial domination brought no benefits to the Kazakhs. The situation was quite the opposite for Denmark, which got the most from the least. The first goal to hit the net behind host goalkeeper David Loria was scored by the visitors in the 27th minute, when, with a pass from Yussuf Poulsen, teammate Nicolai Jorgensen completed the attack. Shortly before the end of the first half, Team Kazakhstan was left short-handed when Bauyrzhan Islamkhan hit William Kvist with an elbow in a dog-fight and saw red.

At the beginning of the second half, the referee awarded a penalty for Denmark. Eriksen, the visitors’ captain, was accurate and increased the difference in the score. While it was hard to expect a good result in this situation, the Kazakh team kept playing and in the 76th minute managed to win back one goal. Islambek Kuat went one-on-one with the goalkeeper and scored, making it 2-1 and giving some hope that the game could be saved.

Only a few minutes later, however, the Danes scored the third goal. Forward Kasper Dolberg made a well-placed shot, setting the final score for Denmark.

The win was the third for Denmark in the qualifying round. With 10 points, the team is now ranked second in Group E behind Poland. Team Kazakhstan, which suffered its fifth defeat, is on the bottom in sixth place, with only two points.

“Our guys played well and showed grit. As for the red card for our captain, it was a [regular] collision and I do not understand why the referee made such a decision. Of course, there were very few chances when playing in the minority, but our guys kept on [doing their job] and I want to thank them for that. We still have a lot to do; we will have to correct our mistakes, but the game showed that our team has character and hence the future. I want to thank all the fans who came to the match and created an excellent atmosphere,” said Team Kazakhstan’s head coach Alexander Borodyuk after the match.

“The game was tough. I don’t know what to say and I cannot understand why the red card was shown [to Islamkhan]. The guys played 200 percent. After the red card they showed grit, but lacked strength. We tried our best for our fans. They came to support us and we wanted to please them. I think we have the desire, so we will achieve a positive result. Once again, I want to thank the fans who supported us,” said Loria.