“India had never been a far-off country for the Kazakh people. Historical and geographic proximity gave us the opportunity to closely follow events in the Indian peninsula and democratic transformations taking place there found a vivid response in the hearts of the people of Kazakhstan”

I am very glad to note that we managed to agree on opening a direct flight between the capitals of our two countries during the significant year of celebrating the 25th anniversary of the establishment of Kazakh-Indian diplomatic relations. 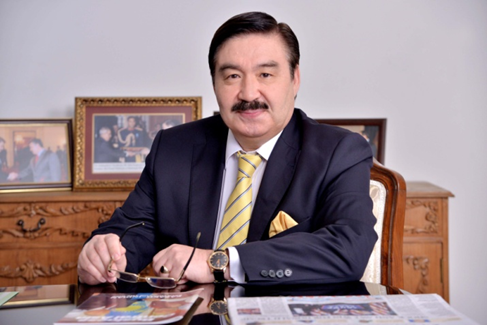 Starting July 2, Air Astana will operate a direct Astana-Delhi flight three times a week to complement the already existing Almaty-Delhi daily flights. The activities establishing the flight were carried out in accordance with the Plan of the Nation – 100 Concrete Steps to implement the Five Institutional Reforms proposed by Kazakh President Nursultan Nazarbayev. In particular, it will help develop Air Astana into a major international operator; turn Astana into Eurasia’s business, cultural and scientific centre; attract researchers, students, businesspersons and tourists from all over the region and provide international transport accessibility to the financial centre of Astana.

Relations between our countries and people are rooted in ancient times when migration took place from Eurasia to South Asia. This period is linked to the Indian ruler Kanishka, known in Kazakhstan’s history as Khan Yerke, and to the Scythians (Saks), who were known in India as Saka people. In the middle ages, our people and cultures were linked during the times of such historic personalities as Qutubuddin Aibak, Ghiyas-ud-din Balban, Amir Timur, Babur and Muhammed Haider Dughlat. In modern times, even before Kazakhstan attained independence, the links between our countries were manifested through the love of Kazakh people for Indian culture and through the visit of Jawaharlal Nehru and Indira Gandhi to Kazakhstan in 1955.

Twenty-five years is a very small period considering the centuries-old history of our relations. However, representatives of both countries generally agree that over these 25 years, our ties of friendly and mutually beneficial cooperation have stood the test of time and our people have retained their warm relations.

India was the first country President Nazarbayev visited outside the post-Soviet area. He always maintained the path of practical improvement of mutually beneficial ties. He has visited India several times since Kazakhstan gained independence (in 1992, 1996, 2002 and 2009). Furthermore, the establishment of a strategic partnership was announced during his January 2009 visit as chief guest at the Republic Day celebrations. This also showed the sincerity of the two nations and people to strengthen partnership and open new cooperation vistas.

Such a high level of political cooperation is also a good base for developing mutually-beneficial trade and economic relations. Right now, Kazakhstan is India’s main trading partner in Central Asia and the second largest partner in the entire post-Soviet region. Despite that, the trade and economic cooperation does not match the potential and the capabilities of our countries.

It is my considered view that thanks to the political will, desire and clear understanding of the importance of developing cooperation between Kazakhstan and India as not only major countries but also leaders in their regions, the leadership of both countries wishes to do its best to strengthen friendship and stable partnership in all areas of cooperation.

When appointing me as Ambassador to India in November 2014, President Nazarbayev assigned me with a number of specific tasks for expanding partnership relations between our countries. I was tasked to strengthen strategic cooperation, take trade and economic relations to new heights and organise the Indian Prime Minister’s visit to Kazakhstan for setting new aims to be achieved by our countries in the near future.

Over the last two-and-a-half years, the Kazakh Embassy in India has tried to do its best to achieve the tasks assigned by the President. Prime Minister Narendra Modi visited Kazakhstan in July 2015, which made it possible to sign a number of important agreements. An investment roadmap that included 26 business projects was adopted and a contract for the supply of 5,000 tonnes of uranium to India was signed, as well as an agreement on defence and military-technical cooperation, etc.

Our strategic partnership has acquired a clearer shape. Kazakhstan’s intention to support India’s candidature for permanent membership on the UN Security Council is a testimony to the strong political ties between our countries. This was included in the joint statement at the end of President Nazarbayev’s 2002 visit to India. Of equal significance is India’s support for Kazakhstan’s membership on the UN Security Council for 2017-18, which was also included in the Tez Kadam joint statement during Prime Minister Modi’s visit to Kazakhstan in July 2015.

Another confirmation of strong partnership is India’s serious approach to its participation in the EXPO 2017 international specialised exhibition. Despite the fact that India is not a member of the International Bureau of Expositions (BIE), it not only decided to take part in the expo because of the level of cooperation between our countries, but also made a request for a pavilion with the largest space.

Two of Kazakhstan’s honorary consulates have been opened: in Mumbai (for Maharashtra) in 2015 and in Chennai (for Tamil Nadu, Karnataka and Kerala) in 2017.

Over the past two years, the flow of Indian citizens to Kazakhstan has more than doubled from 5,000 to nearly 11,000 people. During the same period, the number of visitors from Kazakhstan to India increased almost threefold to 18,000 in 2016.

I am confident that the direct flight between the capitals along with the already successfully functioning Almaty-Delhi flight will contribute significantly to the implementation of President Nazarbayev’s vision, including increasing the number of foreign visitors to EXPO 2017 and making fuller use of the economic and investment potential of business representatives and tourists from India.

The author is Kazakhstan’s Ambassador to India.