By Zhanna Shayakhmetova in Business on 19 June 2017

ASTANA – Kazakh President Nursultan Nazarbayev said during a June 16 plenary session of the 10th Astana Economic Forum that the forum is being held at a historically crucial moment for the Eurasian space.

“A new global player with a market capacity of 3 billion people was created with India and Pakistan’s joining the Shanghai Cooperation Organisation (SCO). The SCO countries’ participation in the development of the New Silk Road programme creates a new economic sub-region. United Nations Secretary General Antonio Guterres noted that ‘the organisation is an important foundation of today’s world order’ and inclusive development is the most powerful tool for preserving peace. Inclusive and sustainable development is in the focus of today’s forum,” Nazarbayev said in his remarks.

The head of state said the unprecedented speed of changing the modern world and the advent of an era of new discoveries and scientific and technical solutions radically transform the nature of economic growth and life. But global economic policy does not fully meet modern challenges, including a critical level of environmental pollution and growing imbalances in global energy consumption.

“A gradual transition to a new economic model is needed. It should be based on clean energy, joint efforts and collective responsibility, taking into account the interests of the whole world,” he said.

The President suggested revising the methodology to calculate per capita gross domestic product as it is one of the important aspects of the development of the world economy.

“It is necessary to put on the international agenda the issue of developing new methods for calculating indicators that measure the wealth of countries and the welfare of their citizens. The GDP indicator has a number of significant flaws. It does not reflect the long-term nature of economic activity. It does not take into account the damage to the environment, including the depletion of natural resources. And it does not reflect the quality of life in a particular country. GDP per capita does not show the citizens’ well-being and it does not take into account population stratification by income,” said Nazarbayev.

The traditional GDP creates a false perception of economic prosperity.

“I believe that an updated methodology for calculating GDP can be adopted on the basis of green GDP and indices such as the Human Development Index and the Organisation for Economic Co-operation and Development (OECD) Better Life Index. It should adequately reflect the needs for balanced development of countries,” he said. 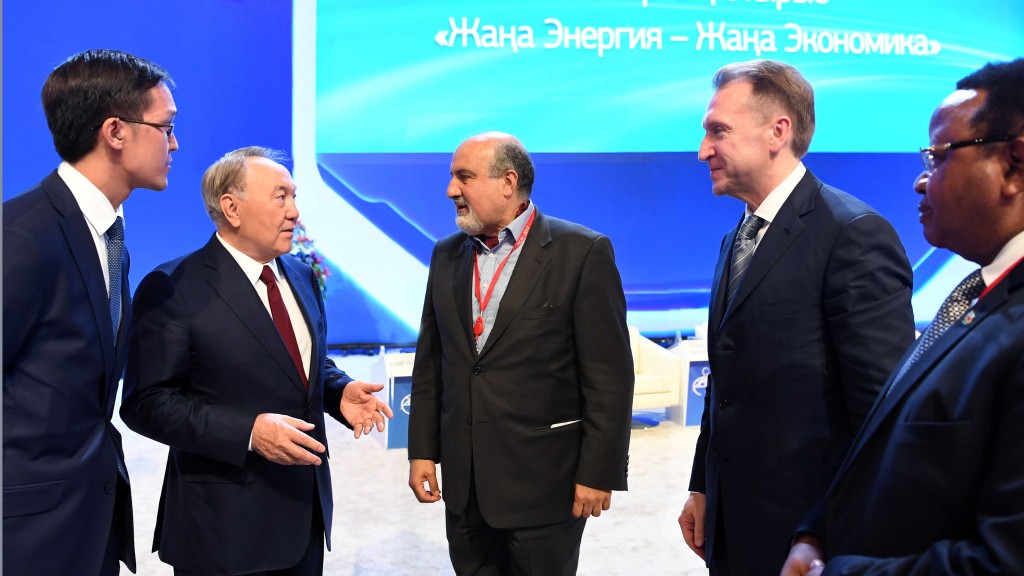 Transformation of the world financial architecture should also be considered.

“It’s time to consider the introduction of the global payment unit. This will save the world from currency wars, speculation, avoid distortions in trade relations and reduce volatility in the markets. The currency should have a simple transparent mechanism of emission, subject to its consumers. A payment unit of account can be created in the form of a cryptocurrency taking into account digitalisation and block-chain development,” he said.

The introduction of a global currency is possible by creating a pool of central banks, for example, the Special Committee at the United Nations (UN), he added. 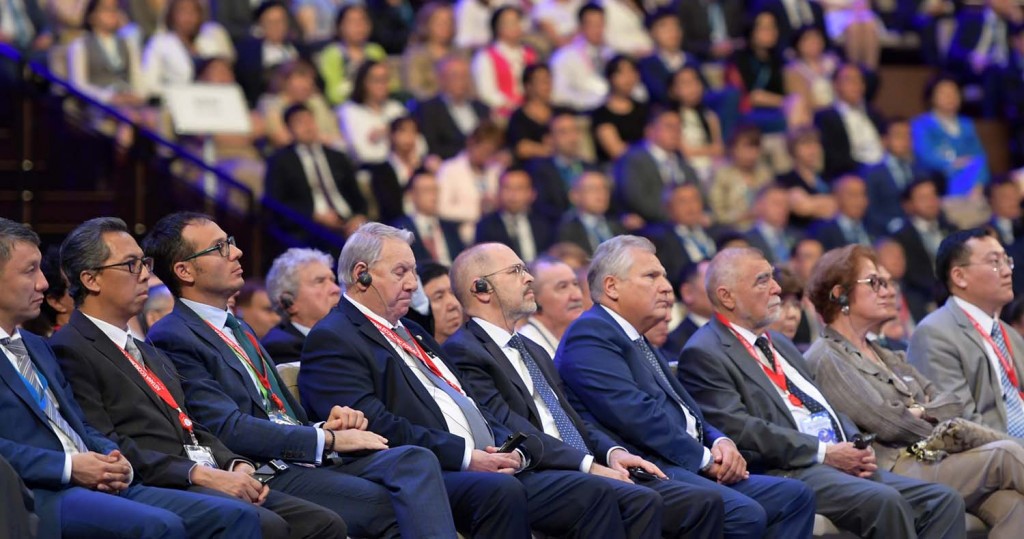 “Kazakhstan is the first country in the Eastern Europe, the Caucasus and Central Asia that launched the greenhouse gas emissions trading scheme. We developed and adopted the appropriate regulatory base and we are ready to share our experience in this area,” he said.

The head of state noted economic growth should be based on clean energy development and environment preservation. In the context of the ecological future of the planet, the concept of a nuclear weapons-free world is of great importance.

“Kazakhstan is a leader in the struggle for a world free of nuclear weapons. We are the first and the only country that closed the nuclear test site and abandoned its nuclear arsenal. We will continue these activities and encourage everyone to support us. By this we reaffirm our commitment to the global cooperation and peace,” he added. This annual platform facilitates the transfer of knowledge and speeds up the process of making strategic decisions, said JP Morgan Chase International Chairperson Jacob Frenkel who moderated the session.

“Kazakhstan’s development strategy is well known, well appreciated, well recognised by the global community. By the year 2050, it is expected to be among the world top 30 developed countries. And the third modernisation of Kazakhstan will be the right force to achieve it … It is enough just to look around the development of Astana and to recall what it was then and what it is now, to appreciate how can one reach high with vision, determination, commitment and with a sense of leadership,” he said.

Nazarbayev also met with the Nobel Prize laureates and top-level experts at the Akorda presidential residence.

“Meetings with experts are important and always interesting. Especially when important changes take place in the world,” he said. “Kazakhstan is in the centre of world attention regarding the development of new technologies due to EXPO 2017. The world around us is revolutionising with the technology development. We considered such futuristic technologies as electric vehicles, unmanned vehicles, nanotechnologies and new types of energy. Now this is reality.” 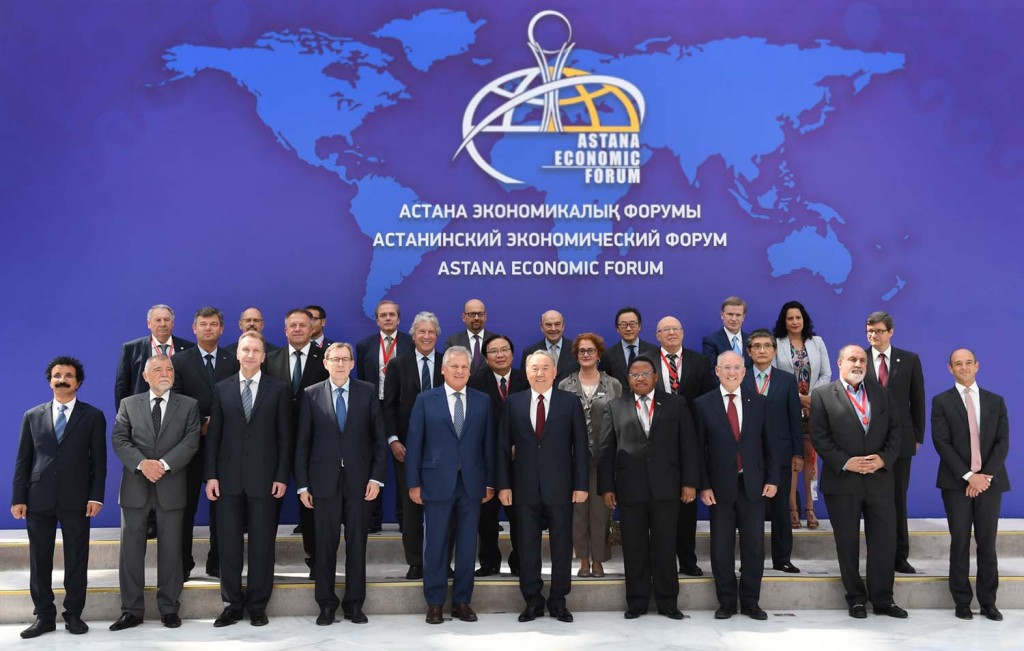 Nazarbayev said it is important to consolidate efforts to solve global problems.

“The U.S. withdrawal from the Paris agreement and the situation around Qatar complicates sustainable development. Environmental problems, processes of de-globalisation, migration flows, and paternalism in different countries hamper trade, mutual relations and integration,” he said.

Global challenges in leadership, integration of the transit and water potentials of Greater Eurasia, corporate governance as a factor of investment attractiveness, world energy system were also on the forum’s agenda.

The model and roadmap for the country’s green financial system development workshop was initiated by the Astana International Financial Centre (AIFC). Participants spoke about the role of financial centres in green finance development, the conditions for investing in the green economy of Kazakhstan and considered the best world practices for introducing green finance.

More than 2,500 delegates, including politicians, Nobel laureates, chief financial officers of Fortune Global 500 companies, scientists and economists took part in the 20 panel sessions, round tables and conferences at the forum.