By Malika Orazgaliyeva in International on 9 June 2017 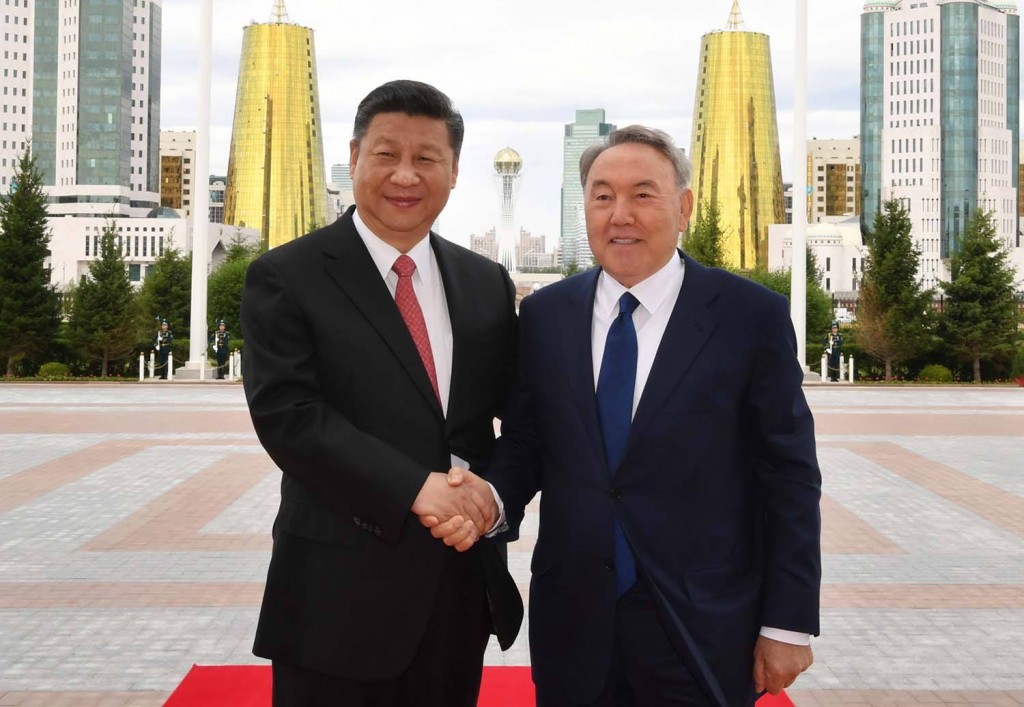 The two leaders also launched the work of a new container service in the Eurasian space – the Kazakh-Chinese terminal at the port of Lianyungang (China) and the dry port of the Khorgos – Eastern Gate special economic zone.

Xi is in Astana for the June 8-9 Shanghai Cooperation Organisation (SCO) Summit and the June 9 official launch of EXPO 2017 international specialised exhibition.

“A vivid example of such harmonious work is our cooperation in the framework of the SCO. Tomorrow, we will take part in a historic meeting of the organisation, which will expand due to the accession of India and Pakistan. After this meeting, the SCO chairmanship will be transferred to China. We want to wish you success,” Nazarbayev said June 8, welcoming his guest at the Akorda and noting that China is a close strategic partner.

The Kazakh President also noted increases in bilateral trade and said the coordination of Kazakhstan’s programme Nurly Zhol and China’s One Belt, One Road initiative also has the potential for success.

“I believe that our all-round dynamic interaction may serve as example for others. In spite of the positive dynamics, we cannot stay on this. We have the potential to deepen our cooperation in the priority areas. Mainly, we have to concentrate on the idea of ​​the Silk Road, which has a part on the territory of Kazakhstan. During four years, we built 1,500 kilometres of railways and 3,000 kilometres of highways. We have two railway and six automobile crossings. Thus, Kazakhstan becomes a transit state due to the development of trade with China,” he said.

Xi thanked Nazarbayev for the warm welcome and noted the rapid development of the Kazakh capital.

“Over 20 years, Astana has experienced tremendous changes, which open up a great future for Kazakhstan. I am convinced that under the leadership of President Nazarbayev, Kazakhstan will achieve new successes in the matter of national revival and construction. During the period of our cooperation, we have achieved considerable results in all areas. We have trustful political relations,” Xi said.

“The One Belt, One Road initiative has received wide support all over the world. This initiative corresponds to the modern general trends of world processes. In fact, this is our common initiative that meets the challenges of global economic globalisation,” Xi added.

After the talks, the two Presidents visited China’s EXPO 2017 pavilion and took part in a programme titled “Kazakhstan and China – The Transit Bridge of Eurasia.”

“The Chinese exposition is one of the largest at EXPO 2017. China is a world leader in the field of renewable energy sources. I am confident that your country’s participation will make a significant contribution to the development of technologies and cultural ties,” Nazarbayev said.