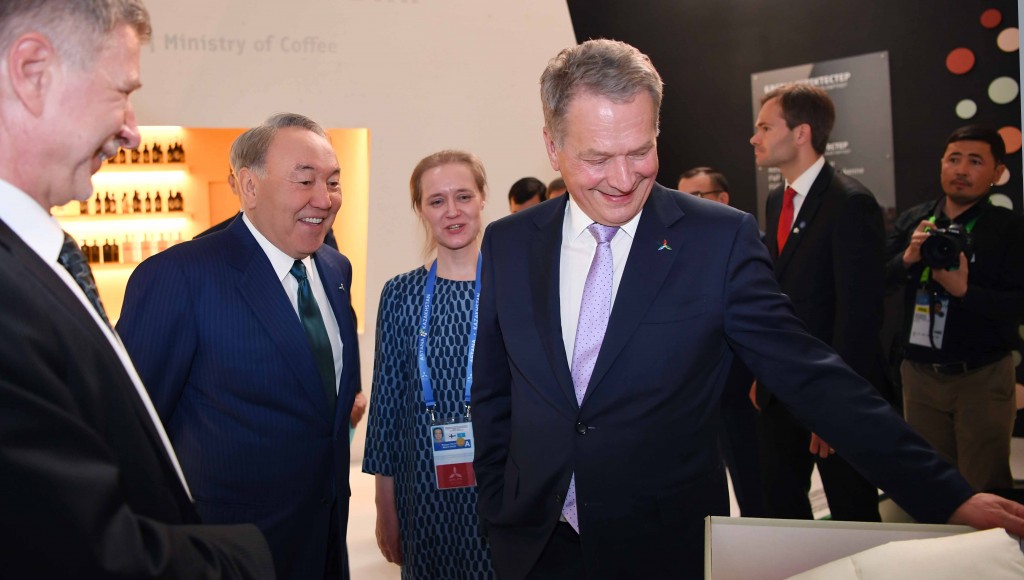 The opening ceremony coincided with the celebration of Finland’s national day at the expo and the 100th anniversary of Finland’s independence.

The two heads of state visited the exhibits within the Finnish national pavilion and toured Kazakhstan’s pavilion in the Nur Alem complex in the heart of the expo. They also held bilateral talks at the Congress Centre of the exhibition complex.

Nazarbayev thanked Niinistö for his visit and his participation in the Finnish pavilion’s opening, and highlighted the high level of relations between the two countries.

“Our relations can be called exemplary. We meet with you repeatedly at various global venues. Finland supported us in choosing the venue for EXPO 2017, as well as obtaining the status of a non-permanent member of the UN Security Council. Kazakhstan also supports Finland in the international arena at all times,” he said.

“I’m always interested in your opinion on not only bilateral relations, but also on global issues. Today, virtually the whole world is watching the negotiation processes held in Kazakhstan. In particular, these include the Syrian talks at the Astana site,” he said.

He also thanked Nazarbayev for his personal visit to the Finnish national pavilion and invited him to pay a visit to Finland.

At a press conference following the opening ceremony, Niinistö also commented on the presence and development of Finnish businesses in Kazakhstan.

“We have a long-term relationship: our diplomatic relations are celebrating their 25th anniversary this year. We have many common projects in business and during my official visit a couple of years ago, I had a business delegation with me and some of these companies were able to develop their business in Kazakhstan,” he said.

“In the near future we are planning to launch an Astana-Helsinki direct flight. We are also the only European country that has the same railway standards as Kazakhstan, and this provides additional opportunities for logistics and Finland’s participation in the New Silk Road,” Niinistö concluded.

One of the best known symbols of Finland, Santa Claus, also arrived in Astana to participate in the national day at the expo. Joulupukki (Santa’s Finnish name) came from his home region of Lapland to experience the +30˚C heat, greet the guests of the Finnish pavilion and even present gifts.

Finland is considered the current world champion in ecology. It is recognised as the greenest country on the planet. About 50 Finnish companies submitted applications to participate in the Future Energy expo in Astana. Many of them are already implementing the new technologies in the energy sphere in their home country and succeeding.