By Anuar Abdrakhmanov in Sports on 27 June 2017

ASTANA – Kazakhstan’s football clubs are set to start qualification rounds in the UEFA Champions League and the UEFA Europa League in July. The four teams representing the nation last week learned who their opponents at the initial stages of the European Cups would be. 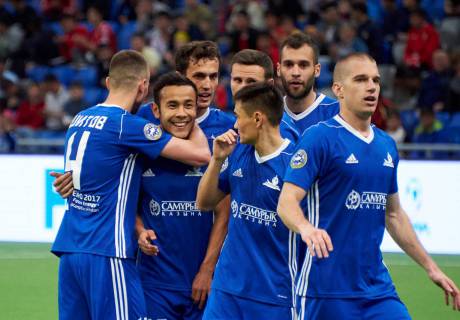 Three-time winners of Kazakhstan’s Premier League FC Astana will start their road towards the UEFA Champions League with two matches against Latvian champions FK Spartaks Jurmala. Taking into account the capital city club’s solid experience in European Cups in recent years – they have played twice at the prestigious tournaments’ group stages – they look like strong favourites in this pairing. However, FC Astana head coach Stanimir Stoilov has warned his players against underestimating the opponents.

“Spartaks are serious competitors; they won the Latvian championship last year. They have experienced players, some of them [now or previously] parts of their country’s national team. As I always say, [whether the draw was favourable to you] can be assessed only after the matches end. If we win over Spartaks, then we can say we were lucky. The Champions League has no easy-to-beat teams; we should never underestimate the opponent. We even have a good example. Last year we played Lithuanian Zalgiris. Many thought that we had already made it to the next round, but the game was very hard, and only a goal at the very last minute saved us then,” he explained.

The first leg will be played July 12 in Latvia; the return match in Astana will take place July 18.

The three other Kazakh clubs, FC Kairat Almaty, FC Irtysh Pavlodar and FC Ordabasy Shymkent, will start their Europa League campaigns in the first qualifying round.

Kairat will be playing Atlantas Klaipeda. The Lithuanian side has experience playing Kazakh opponents, as they were eliminated 0:3 at the hands of Karaganda’s Shakhter in 2014.

“We understand these will be important matches for us. Of course, we will train hard and stay focused as much as possible, because we have a clear task ahead of us [to progress in the tournament]. We respect all teams and will be very serious [in our approach],” said Kakhaber Tskhadadze, FC Kairat’s coach.

“Our opponents are not the team you would try to avoid. They have no celebrity players, but it is a very strong team with a good young coach. The confrontation is likely to be tough. Of course, we will try our best to win. However, it will be difficult, because it is a good strong team,” Irtysh’s head coach Dimitar Dimitrov said of his team’s challenger.

Ordabasy will challenge Bosnian side Siroki Brijeg. The Balkan team previously played Irtysh in 2013 and eliminated them 4:3 on aggregate, giving Shymkent a chance to enact revenge on behalf of Kazakh clubs.