ASTANA – The Astana Declaration was signed June 23 at the second meeting of European Union (EU) and Central Asia ministers of education at the capital’s Rixos President Hotel in Astana. The declaration intends to expand educational cooperation between the EU and Central Asian countries. 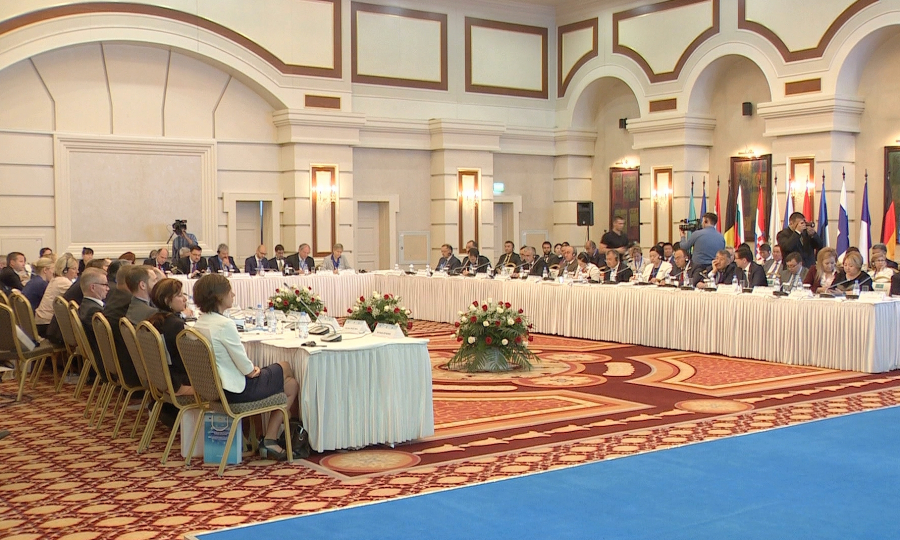 “We need to make formalised education available to much greater amount of people. All the kids from 3 to 6 year olds are to go through pre-schooling. Today, they’re 85 percent, showing an increase of about 6 percent from last year,” he said.

He also said kids need to start formal schooling earlier than the current six or seven years of age as it is today.

“[It has to start] at the age of five or six with the introduction of 0 grade, which starts this year in a limited scope, but is planned by September 2019 on a national scale. So, it will be a 12-year schooling program from zero to 11.”

“We had 20,000 kids per year leaving after the ninth grade (about 6-7 percent) that neither went to the 10th grade of school nor went to college,” he said.

Sagadiyev believes Kazakhstan can become a true educational hub in Central Asia. “We see academic mobility on an exponential rise. We see a number of parents willing to send their kids to study abroad rising dramatically. We don’t believe it will stop in a globalised world.”

“In parallel, we would love to help our Central Asian partners benefit from educational cooperation in any way we can. As one step, we propose to establish the Central Asian Bureau of the Bologna Process in Kazakhstan. The creation of such a bureau will promote the exchange of experiences between our countries and the European Union, will bring closer education systems of Central Asia,” he stressed.

“Central Asia has rich natural and human resources, transit-transport potential and a favourable geographical position,” Vassilenko said in his welcoming remarks. “In this regard, it is in our common interest to preserve the politically stable, economically sustainable and safe development of the Central Asian region.”

According to Vassilenko, such meetings can initiate broad international dialogues and improve the national education system and pave access to quality education.

“Some 12,000 Kazakh students were able to use this programme to study in some of the best universities in the world. The cluster of Nazarbayev University and the network of intellectual schools in Kazakhstan could also interest our international and regional partners,” he said.

Vassilenko believes it is important to include the “concepts of cultural tolerance and adherence to peaceful dialogue” in the educational programmes of primary and secondary schools around the world.

“We are convinced that this will allow us to form a generation of a new humanistic thinking, which is critically important for the future of mankind, given the aggravation of crises and conflicts in many parts of the world today,” he stressed.

In his turn, Burian noted that a few days ago the EU reconfirmed Central Asia is a significant partner for the EU in its Council Conclusions updating the EU Central Asia Strategy adopted 10 years ago.

“The EU reaffirmed its commitment to develop a strong and durable relationship, based on joint ownership and aimed at fostering peaceful, prosperous, sustainable and stable socio-economic development of the Central Asia region in line with the recently adopted EU Global Strategy and the joint commitment to Sustainable Development Goals (SDGs),” he said.

“We have also witnessed over the last years in Europe and in Central Asia what damage can bring the exclusion and consecutive radicalisation among the younger population,” he went on saying. “I believe we all agree that education plays a critical role in forming a person, his world views and in preparing him for a quality adult life as an integral part of a broader society. With this in mind it can be surely said that investing in education we are investing in the security and stability of our societies.”

He noted officials in Brussels and in European capitals “see Central Asia as a major gateway between Europe and Asia representing a young and growing market with significant potential for investment and trade, infrastructure and people-to-people contacts.”

Vassilenko added that to unleash this potential should be the guiding principle for future cooperation. “I believe the cooperation on education is a corner-stone in this endeavour.”