Book by Chinese president translated into Kazakh, presented in Astana

By Dana Omirgazy in International on 9 June 2017

ASTANA – The Kazakh-language version of Chinese President’s book “Xi Jinping: The Governance of China” was presented June 5 in the Library of the First President in Astana. 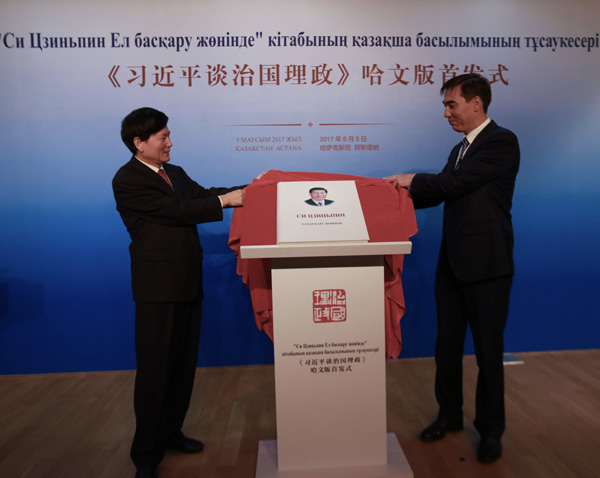 Deputy head of the Publicity Department of the Central Committee of the Communist Party of China Tuo Zhen said the book demonstrated China’s development theory and path, as well as internal and foreign policies, chinadaily.com.cn reports.

“The publication of the Kazakh-language version of ‘Xi Jinping: The Governance of China’ opens a new window for the Kazakh people to better understand China and provides a new platform for both countries to communicate issues about governance in our countries,” he said.

Zhang Hanhui, the Chinese ambassador to Kazakhstan, added the new version of the book gives Kazakhstan a useful experience of how to govern a country.

“As the new book is published before the visit of President Xi to Kazakhstan, we believe the two countries will enhance mutual trust and better strategic coordination,” he said.

The book features 18 chapters and contains 79 speeches, talks, interviews, notes and letters written by the Chinese leader, dating between November 2012 and June 2014. The politician talks about the reforms in his country and, in general, about the country’s political path. The publication has been translated into 25 languages. Approximately 2,000 copies have been prepared in the Kazakh language. So far, more than 6.2 million copies have been distributed around the world.

In addition, the Beautiful China and Beautiful Kazakhstan photo exhibition with more than 200 works of the countries’ natural scenery and people has opened in the Palace of Peace and Harmony. The event marks the connecting of the China-proposed Silk Road Economic Belt initiative with Kazakhstan’s Nurly Zhol economic policy.

According to China’s ambassador, the two countries have made great contributions to promoting cultural exchanges. The exhibition is significant because it displays the beauty of the two countries and shows the friendship of its peoples, he said.

The Chairman of the People’s Republic of China is visiting Kazakhstan June 7-10 to pay a state visit and participate in the Shanghai Cooperation Organisation summit and the opening ceremony of the EXPO 2017 international exhibition at the invitation of President Nursultan Nazarbayev.