Astana EXPO 2017 kicks off with dazzling show, concert and fireworks

ASTANA – Visiting more than a hundred countries in one day is now possible thanks to world expositions such as the one happening this year in the Kazakh capital. The long-awaited EXPO 2017 kicked off June 10 with numerous pavilions open for public view.

For the 25-year-old country, the exhibition has become the most important event in its history. Kazakhstan has had the experience of hosting large-scale events like the Organisation for Security and Co-operation in Europe (OSCE) summit in 2010 and the Asian Winter Games in 2011, but the expo supersedes all the others by its magnitude.

Right after hosting the 17th Shanghai Cooperation Organisation summit, Kazakh President Nursultan Nazarbayev greeted his guests June 9 – 17 heads of state and government who arrived for the show. They witnessed the dazzling opening celebration, concert and fireworks that went late into the night.

The fair officially opened to the public the next morning with a contrast of African jazz, Russian stilt walkers and Asian dancers just to name a few – all nearly at the same time and leaving little chance for one person to cover everything. 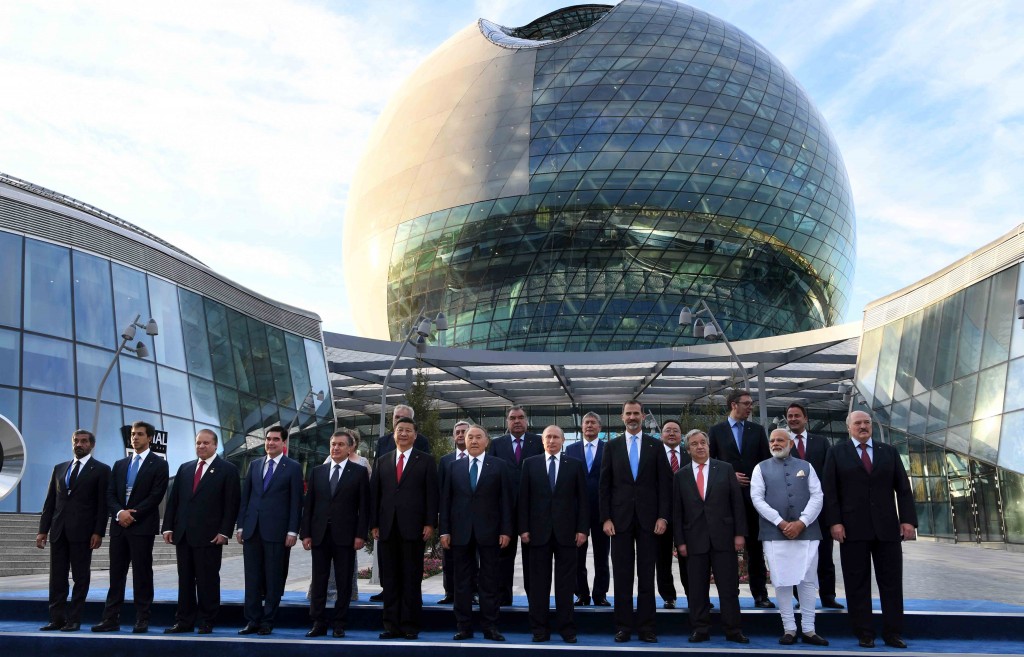 The Kazakh pavilion, represented by an eight-storey sphere, is certainly the main attraction and The Astana Times recommends starting one’s tour there. The pavilion tells the story of the young country, including its ancient history through unique art installations, and enigmatic 3D shows and video clips unveiling future energy.

After the Kazakh pavilion, it’s a personal preference where to visit next. It’s nearly impossible to finish the tour in one day; we suggest buying an unlimited ticket (tickets can be purchased via the official website tickets.expo2017astana.com) and spending at least a few days. Make sure to wear sneakers or other comfortable shoes to walk the distance.

Each pavilion offers a unique concept about future energy, an idea each country interprets in a different way. For instance, the U.S. pavilion sees it as the source of infinite energy that’s within all of us.

“It’s imagination, innovation; it’s invention that has driven America and that drives other countries that we see here gathered in Astana for EXPO 2017,” pavilion director of communications Anthony DeAngelo told the paper.

“We are focused on the power that lies within all of us as individuals, as nations, to power the future. We are also focused on our student-ambassadors,” he added.

Nearly 40 undergraduate and graduate students from 33 American universities are in the capital for the event. They all speak either Russian or Kazakh and have a deep affection for this part of the world, he said.

“They have come for three months for the expo not only to meet the Kazakhs, but also to give them and the people around the world an opportunity to really meet the future of America and that source of infinite energy that is going to power the future energy,” added DeAngelo.

The Russian pavilion, focusing on the Arctic, nuclear power and renewable energy sources, features a real iceberg brought from the Arctic.

“This iceberg is over four metres in height,” said Russian pavilion guide Aigul. “This is only a small fragment transported in a container and it was broken off by a Russian icebreaker ship. With the help of such icebreakers like the Russian Leader that will be finished in 2025, Russians want to research the Arctic.”

The South Korean pavilion boasts the longest lines, as the average visit takes about half an hour. It features the concept “Energy of the future. Smart life.”

The Japanese pavilion, the biggest in size, is named Smart mix technology and focuses on research to develop areas of future energy.

“Among our favourite pavilions was the Israeli pavilion,” said Russian IT technologist Sergei Andreichenko. “It was a spectacular show, very artistic and beautiful. We also enjoyed the Egyptian pyramid and the Thai pavilion. But I think everyone will find something for him or herself.”

Small food kiosks are located in front of each pavilion and there are restaurants on the expo grounds, although some are still under construction. A first-floor international bar and second-floor food court are open near the exit from the Kazakh pavilion.

The more than 1,500 volunteers at the site every day, most of whom speak English to accommodate foreign guests, will make sure no one gets lost.

Each pavilion offers its own solutions for future energy and is worth checking out. In addition, every week organisers are offering various concerts, shows and entertainment. For more information, visit the official website www.expo2017astana.com.