This year will mark the 10th anniversary of the establishment of the UN Regional centre for preventive diplomacy for Central Asia (UNRCCA) in Ashgabat. In an interview with this newspaper, Petko Draganov, Head of UNRCCA and Special Representative of the UN Secretary-General, discusses the achievements so far and the goals for the future. 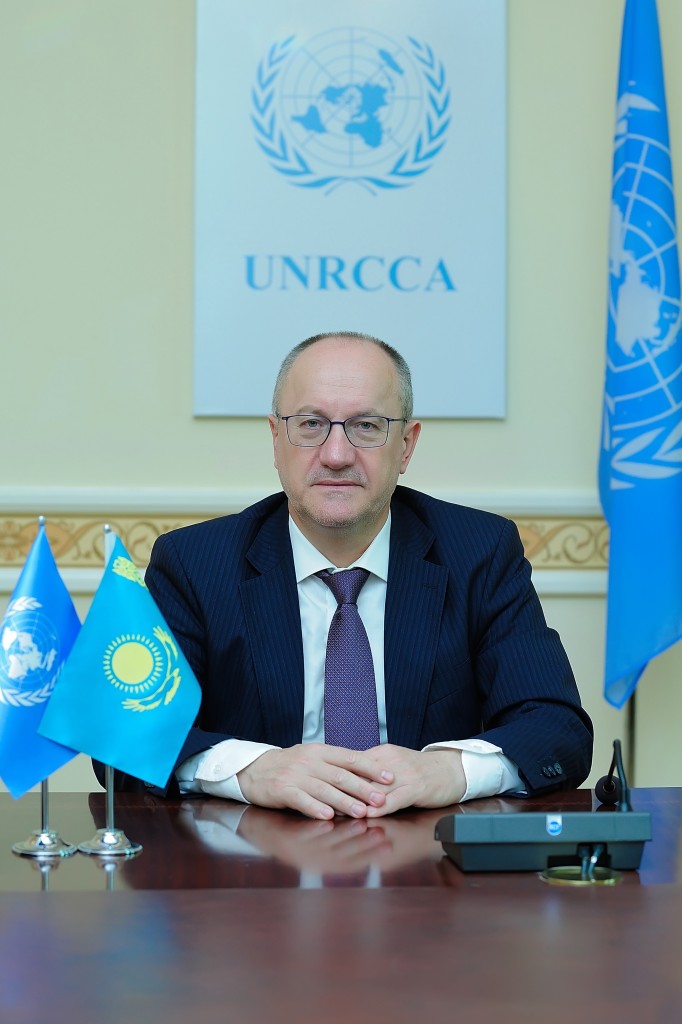 Please tell us about the history and objectives of the Centre.

The UNRCCA in Ashgabat was established by exchange of letters between the UN Secretary-General and the President of the Security Council in May 2007. UNRCCA was the first political mission of the UN with a mandate focused solely on preventive diplomacy.

The main objective of the Centre is to assist Central Asian states in finding solutions to potentially contentious regional issues. The activities of the Centre are implemented based on the mandate and three-year programmes developed in close consultation with the countries of Central Asia. For the period of 2015-2017 our priorities have been identified as 1) transnational threats and challenges; 2) management of shared natural resources; 3) internal factors affecting regional stability; and 4) the establishment of national/regional capacity for conflict prevention.

Compared to other UN missions, our centre is smaller in scale, with a minimal budget and limited staff. The main part of our mission’s activities is funded by extra budgetary sources. At the same time, the geographical area of responsibility covered by UNRCCA is broad; it includes five states. Therefore, compared to most missions, which as a rule cover a single country, all our efforts must be multiplied at least by five. In light of this, the Centre is one of the most effective agencies of the UN in terms of resources/results ratio.

In 2017, it will be 10 years since the establishment of UNRCCA. Could you point out the main achievements of the UNRCCA over this period?

If we were to speak of definite results of our work over the past 10 years, we probably need to start with the fact that throughout this time there were no major inter-state conflicts in Central Asia. This, of course, is the merit of the states themselves, but partially, there is our credit as well.

Primarily, the Centre has provided governments a platform for dialogue on the most difficult regional issues: trans-boundary water management, countering security threats, strengthening of stability, development of regional cooperation. The Centre provided good office for preventing and responding to emerging problems that are threatening internal stability of individual countries and the entire region.

In the process of monitoring the situation, we have accumulated considerable analytical potential. We provide information support to the governing structures of the UN with the aim of making and implementing effective and timely solutions. Twice a year I speak at the Security Council with progress reports and analysis of the regional situation. The proposals that we coordinate with the countries are communicated to the members of the Security Council and receive international attention. To further raise the global awareness of the concerns in Central Asia, the Centre has initiated several visits of the UN Secretary-General to all five Central Asian states. In the near future, the newly elected Secretary-General Antonio Guterres will also visit Central Asia. This is evidence of the great attention paid by the leadership of the United Nations to the region and of willingness to assist in solving the existing issues.

Over the years, we have organised dozens of international workshops and round tables on topical issues of regional security and have trained more than 1,000 specialists in various fields of preventive diplomacy. There were hundreds of rounds of talks in the capitals of Central Asian states and in other countries, aimed at contributing to overcome differences and establishing rapprochement.

At times, we are told: “Your work is all talk, give us concrete results: roads, equipment, infrastructure, financial support, etc.” Diplomats hear such reproaches often. I can remind the known phrase: while diplomats speak, guns are silent. Questions of social and economic development are, after all, the area of responsibility of the states themselves. The main purpose of the Centre is to build trust between countries, which will create favourable conditions for comprehensive cooperation, including in the trade-economic sphere. Certainly, results of such work will not be visible at once; however, we note positive tendencies. We particularly welcome and support the efforts of countries aimed at facilitating customs and other administrative barriers to trade.

The signing of a number of documents regulating collaboration with our partners in the region and outlining strategies for future action can be considered concrete results of our work. I would like to especially note the Joint Plan for the implementation of the UN Global Counter-Terrorism Strategy, approved by high representatives of Central Asian countries in November 2011 in Ashgabat. The plan pays considerable attention to the humanitarian aspects of preventive diplomacy, noting the need for an integrated approach addressing the problems of terrorism, violent extremism and radicalisation of the population in order to eliminate the root causes of these threats, while respecting basic human rights and freedoms of the individual. This was the first practice in the world of adapting the global counter-terrorism strategy to a specific region. It served as an example for countries in other parts of the world. In the course of the implementation of the plan, considerable experience has been accumulated, which we plan to discuss at a ministerial conference on June 13 this year in Ashgabat.

Another specific example of UN preventive diplomacy were the events in Kyrgyzstan that occurred in 2010. Since the change of government in Bishkek in April 2010, UNRCCA has been monitoring the political situation in the country with a view to early warning of the interim government and the international community about the existing risks. Unfortunately, law enforcement has been unable to prevent the outbreak of ethnic violence in the South of the country. In this situation, the efforts of the Centre were focused on the support of the authorities in post-conflict recovery and national reconciliation. The transition period has been completed peacefully by the formation of a legitimate government, as a result of free and fair parliamentary and presidential elections. At the same time, according to our analysis, not all the causes of ethnic tensions are eliminated. Further work is needed to improve inter-ethnic relations.

The Centre has proposed a number of initiatives in the field of trans-boundary water management. What has been accomplished on this issue?

In 2010, a Memorandum of Understanding between the United Nations and the Executive Committee of the International Fund for Saving the Aral Sea (IFAS) was signed at the UNRCCA headquarters in Ashgabat on the development of a mechanism for monitoring and preventing threats to the environment in the Aral Sea Basin. Based on this document, the Centre cooperates with the EC IFAS in terms of information exchange, enhancing the potential of its employees, assistance in mobilizing international support in the implementation of Programmes in the Aral Sea Basin (ASBP) and a number of other issues. Currently UNRCCA is in contact with the Turkmen presidency of the EC IFAS on the development of a regional water strategy. The Centre also collaborates with UNESCO in the study of the problems of melting high-altitude glaciers and its impact on national and trans-boundary water systems, as well as the creation of an appropriate system for the exchange of information and knowledge.

In cooperation with the Scientific-information centre of Interstate coordination water Commission (SIC ICWC), the Centre develops an early warning mechanism for potentially problematic situations on Trans-boundary Rivers. We are currently preparing and distributing early warning quarterly Bulletins based on an agreed set of pointers.

For several years now, we have been working with the Central Asian states to create a legal mechanism for an integrated solution of the region’s water and energy problems. As a result of several years of negotiations, in March 2017, the Centre sent to governments a renewed proposal to develop agreements on the use of water resources in the Amudarya and Syrdarya river basins. The proposed projects are aimed to help countries create a clear legal mechanism for managing trans-boundary water resources while taking into account the interests of all parties, equal significance of various types of water use, rationality and justice. Projects also propose the creation of a multi-stage dispute resolution mechanism. I have already held the first round of talks in the capitals of the Central Asian States and confirmed the readiness of most of them to negotiate on this issue.

As you know, security in Central Asia is affected by external factors, in particular, originating from Afghanistan. What does the Centre do to counter external threats?

Many threats of safety of countries of Central Asia have an external origin. In this connection, we monitor development of events in adjacent Afghanistan, in Syria and Iraq, from the outlook of their influence on the region.

Concerning Afghanistan, my staff and I regularly visit the country for meetings with government representatives and other partners to learn the information first-hand and to assess the situation on the spot. The Centre maintains close contacts with the UN Mission for assistance to Afghanistan (UNAMA) to ensure a comprehensive analysis of the situation in the region.

We involve representatives of Afghanistan in our events. A few dozen Afghan civil servants attended our courses on capacity building in various fields of preventive diplomacy. This is our contribution to strengthening trust between Central Asian states and Afghanistan and in changing the perception of this country in the eyes of the peoples of Central Asia. Our goal is not only to help in early warning of potential cross-border risks, but also to pay attention to the opportunities for cooperation that are emerging. In this regard, I am pleased to note the development of relations between Central Asian countries and Afghanistan, in various formats, for the further involvement of the latter in regional cooperation mechanisms. The construction of the gas pipeline Turkmenistan-Afghanistan-Pakistan-India (TAPI), the transmission line Central Asia – South Asia (CASA-1000), planned railways and roads will contribute not only to stabilizing Afghanistan, but also to the development of Central Asian countries themselves.

In conclusion, what are your forecasts regarding the development of regional relations and what is necessary for a more successful UN preventive diplomacy in Central Asia?

Perhaps, I will start with the second part of the question. As you are aware, the main purpose of the mandate of UNRCCA is to assist countries in maintaining regional peace and stability, which are of special importance to national security, and is within the sovereign authority of States. Therefore, the effectiveness of the work of UNRCCA is determined by the political will of governments to cooperate with each other and seek solutions to common problems. The Centre is making efforts to mobilise such political will to respond to the challenges and threats to regional security and stability. At the same time, the character of a famous movie tells us: “The East is a delicate matter.” The countries of the region follow their own development paths, and each has its own distinctive features and national interests. The Centre must take into account these dynamics.

Concerning forecasts, in my opinion, one can rightfully state that within 10 years, conditions for the successful implementation of preventive diplomacy in the region have been created. For numerous existing problems, solutions are outlined. Recently, we note the positive trends in regional relations, and this gives us reason to look to the future with a certain degree of optimism. For its part, the Regional Centre will continue to operate in accordance with the motto under which we celebrate our tenth anniversary: “​To promote dialogue – to prevent conflicts.”